Critic’s Notebook takeaway: beautiful, luxurious, wonky electronics? Sounds like a Jag to us. 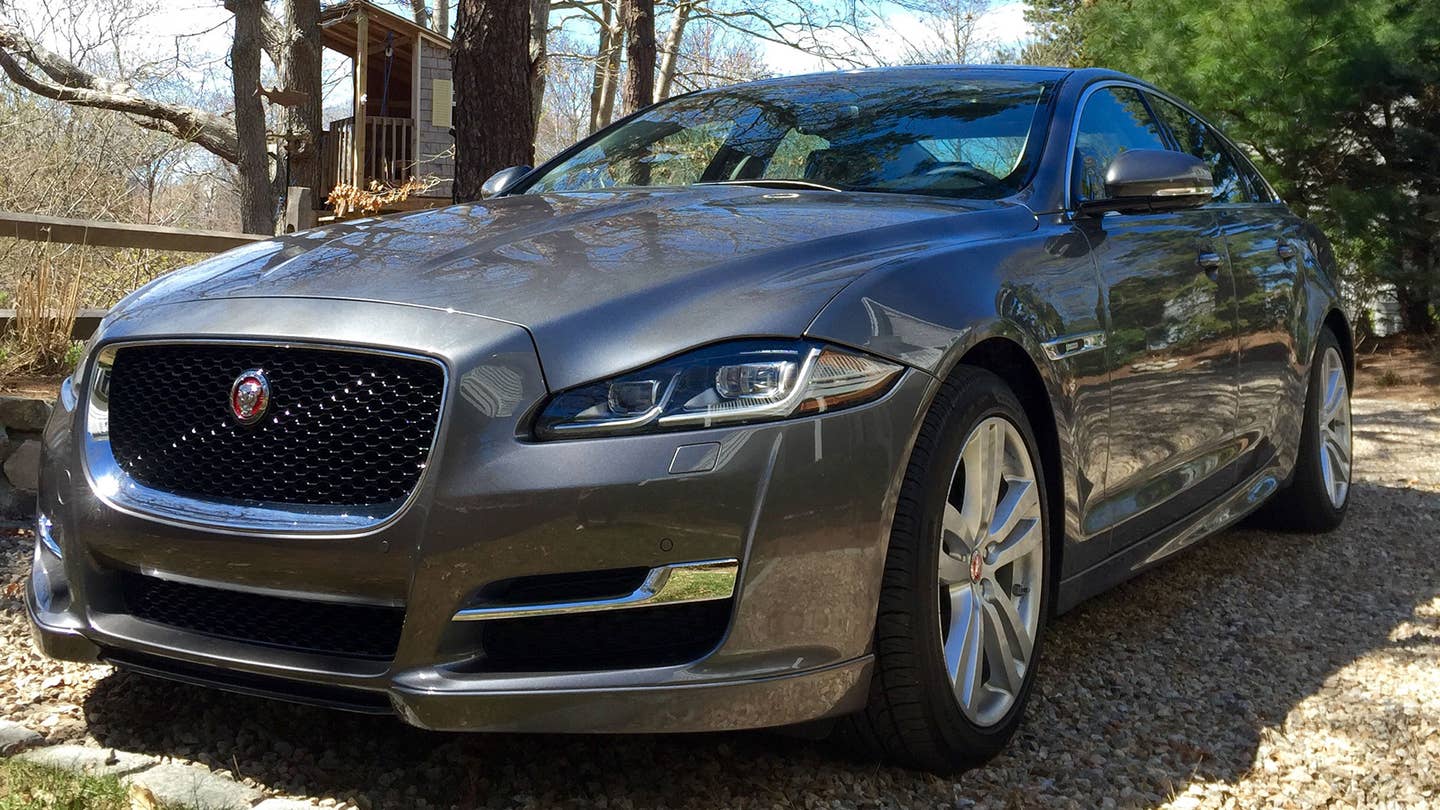 Welcome to Critic's Notebook, a quick and off-the-cuff collection of impressions, jottings, and marginalia on whatever The Drive writers happen to be driving. Today's edition: The 2016 Jaguar XJ R-Sport AWD.

The groom hoisted the bean bag a couple times before turning to me and offering a bet: "Winner gets to do burnouts in the Jag."

It wasn't much of a bet, since I was the one who showed up to the wedding in the 2016 Jaguar XJ R-Sport AWD and could theoretically do burnouts whenever I wanted, win or lose. What was surprising was that the guy knew exactly what I was driving—I had pulled in late and mostly unnoticed (or so I thought) and parked well away from the resort's main entrance. But word had gotten out: in a parking lot full of Camrys, Cherokees, A3s, 3-Series, and a few C-Classes, I was the guy in the long, elegant, muscular British saloon. And I was regarded as very fancy by association. (Or maybe it was because I was wearing a double-breasted blazer, which in New England is considered a level of dandy-ism on par with a top hat and monocle.)

Jag's continued association with ultra-luxury—at least in this country, at least among a certain demographic—always surprises me. This is a brand that's fought tooth and nail for volume and younger customers, with bona fide sports-hooning models like the excellent F-Type and entry-level offerings like the $34,900 XE and the upcoming F-Pace, which starts at a hair over forty grand. Jaguar's reputation as a manufacturer of nothing but beautiful, high-priced luxury cars with wonky electronics seems dated, given the recent efforts.

Except, of course, that described this car exactly. With just a few options—the $1,980 Comfort Package, which nets you massaging seats, four-way climate control, and an electronic rear sun blind; a stunning Ammonite Gray-Metallic paint job, for $525; and a heated front windshield for an extra $375—plus destination and delivery, the XJ's sticker ran to almost $82,000. So, yes, high-priced. Also, beautiful: the XJ is stunning, with commanding presence from every angle—a trick that only the Mercedes-Benz S-Class likewise pulls off within the XJ's competitive set.

The "wonky electronics" tag is also appropriate here, though a bit unfair in the larger context. Jaguar's new InControl Touch Pro infotainment system can do some pretty amazing things; you can load a GPS route into your mobile phone and the car, using over-air synchronization, will pull that route directly into its nav system. Or, say you're in traffic and running late: using the "share" functionality, with just a few taps on the screen you can send your progress to, say, your wife—the system will let her know that you're not slated to arrive at your destination until 4:06 PM instead of 3:30. All of those cool features are presented on a large, wide, dazzling hi-res screen with fast pinch- and zoom map features.

So, yes, the new infotainment system does some fancy, hi-tech things very well. However, if you want to just toss a destination straight into the nav system and be on your way, it's a disaster. The first time I sat in the car, in a rush to beat the traffic out of the city for a long weekend, I poked around with increasing frustration for 15 minutes just trying to enter an address before I gave up and put it in my phone instead. (Here, a quick video demonstrating the system's lack of an intuitive interface in this regard.)

Okay, so I didn't know that I was looking for that particular (unmarked) on-screen button—ten seconds of familiarization at the dealership negates that particular issue. But it wasn't the only snag. When I entered the destination city before the street name, the system stranded me there—I couldn't add more specific information, and instead had to undo the search and start over again, remembering to begin with the street name first. Infotainment technology has been around too long for stuff like that to be remotely acceptable—if the basics are confusing, who's going to take the time to dive into the really cool stuff?

Those quibbles aside, this is the car you want for a 5-hour blast, well, anywhere. The cabin is a lovely, comfortable, spacious sanctuary from the world outside, and the 340 horses from the supercharged 3.0-liter V6 felt plenty strong, even for such a big car, with loads of highway-passing pull. And while Sport mode makes the throttle touchier, holds revs higher, and firms up the suspension (all good things) I actually preferred leaving the car in its normal driving settings, because soft suspension and a bit of body roll as you waft over bumps and through rolling hills is exactly how a Jag is supposed to feel. Plus, if you're missing that real sports car experience, I think you could pack a Miata into the cavernous trunk and bring it along for the trip.

The groom won that game of Cornhole, but when it came time to do his burnout, he demurred. Maybe he didn't want to scare his new wife; maybe he calculated his blood-alcohol level to be higher than legal. Maybe he just thought he'd break the damn fancy thing. But Jags were always beautiful hooligans, meant to get down and dirty—and now, you can finally let them off the leash and leave your checkbook at home.