The next-generation Yukon has a few tricks up its sleeve—starting with adjustable air suspension. 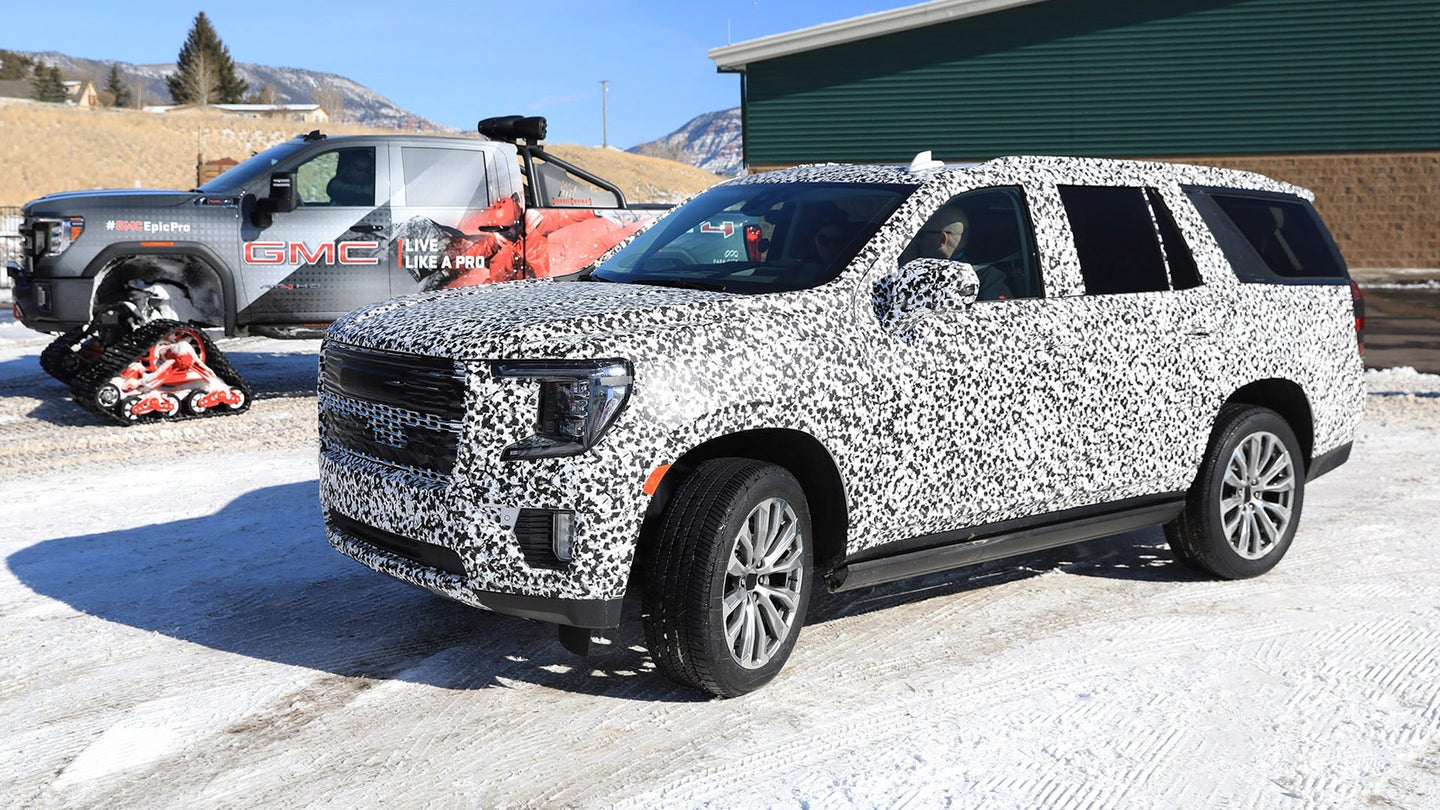 It’s hard to overstate America’s current insatiable appetite for full-size trucks and SUVs. One key benefactor has been GMC, which moved over 564,000 vehicles in 2019 to close out the decade with one of its best years ever while the rest of the industry is shuddering. At the risk of boring you with more numbers, thirty percent of those sold were luxury Denali-trimmed models with an average transaction price of $55,797—besting the likes of Audi, Mercedes-Benz, and BMW. Turns out nothing stirs the soul of the country like a fancy truck.

Given that this stellar year came in part from the popularity of the outgoing GMC Yukon, a five-year-old SUV with more than a few compromises, you might expect the automaker to phone in this next-generation model. But the excellent new Ford Expedition and Lincoln Navigator show there's no room to back down in the fight for family hauler supremacy. To that end, like the Chevy Tahoe and Suburban, the 2021 Yukon and Yukon XL are born anew on the GMT T1 platform used by GM’s latest full-sized pickups with a thorough rethink of its aesthetic inside and out.

Perhaps more significant than any other alteration is the switch from a solid rear axle to a four-link independent rear suspension in the name of comfort and cabin space. There are concerns among the faithful that moving to an IRS will impact the new Yukon/Tahoe/Suburban's tow rating—not born out by Ford making the same switch in its big SUVs, by the way—but regardless, the change presented GM engineers with an opportunity to dig deeper. That's how you get things like a segment-first four-wheel adjustable air suspension paired with the automaker's stellar MagneRide dampers in an all-out push for ride quality and convenience.

Just before GMC took the wraps off the all-new Yukon in Vail, Colorado last week, I got seat time in a camouflaged Denali prototype on a short, snow-covered test course designed to showcase its new tricks. The optional system allows for four inches of adjustment between four distinct settings. You can plainly see the improvements in ground clearance, load leveling, and cargo loading; what you can't see is the system taking in an array of realtime data to make it smarter than your average air ride.

"Ride quality was obviously a big priority, but the air suspension also allowed us to do some other interesting things,” GMC suspension engineer Jonathan Kolenda says. “There’s quite a bit going on behind the scenes to improve the experience. For instance, if the suspension is lowering and it detects that you’re exiting the vehicle while that’s still happening, it will slow the process down to make egress easier. We also do things like automatically lower the vehicle 20mm at highway speeds to improve the aerodynamics for better fuel efficiency. Even the camera systems talk to the suspension in order to properly calibrate based on the current ride height.”

In Vail, GMC was keen to show off the 2021 Yukon's off-road prowess. After fumbling with GMC’s new button-based shifter for a moment, I was guided through the course by an engineer riding shotgun as we drove over packed snow to a designated area to illustrate the torque-vectoring virtues of the new Active Response four-wheel drive tech. It works in concert with the electronic limited slip rear differential to maximize traction when doling out torque; the test consisted of placing the Yukon's driver-side wheels on a slicked-down metal platform with the right wheels on snow.

The truck set off from a standstill with basically zero wheelspin, though I couldn't help but wonder whether the packed snow and the platform's ever-so-slight downward slope were also factors in its flawless performance.

The winding path to the next exercise provided a better sense of the size of the 2021 Yukon, something anyone cantering about off-road will need to consider. While the new Yukon XL has swelled less than an inch in overall length, the standard version I was piloting is more than six inches longer than the outgoing truck, with much of that growth (4.9 inches) coming between the axles. Its noticeably longer wheelbase and other expanded dimensions were on my mind during tight, low-speed maneuvers. But that's the price you pay for a massive improvement in third-row legroom (+41 percent) that makes those seats actually bearable for a change.

The centerpiece of the course was a 36 percent grade ascent immediately followed by an equally steep descent. I lined up the front end and shifted into low range—doing so is the only way to unlock that last extra inch of ride height and ground clearance in the adjustable air suspension. These camo'd test trucks weren't AT4 off-roady models with larger tires and that high-clearance front bumper, so staying out of low range meant we'd either scrape the front on approach or get high-centered at the peak.

With everything set, we climbed the ramp effortlessly. The test also showcased how useful the Yukon's Surround Vision camera network can be when your view out of the windshield is exclusively sky, with comforting, grounding views beamed through its 10-inch infotainment screen. Hill Descent Control made quick, confident work of the downslope with my foot hovering warily over the brake pedal, easing the heavy SUV back to the tarmac without issue.

This stint behind the wheel of the 2021 GMC Yukon was by no means comprehensive—look for a fuller review with more real-world driving later this year. Still, the experience was largely positive, and it supports the notion that the new model is more than just a handsome face.