Tiny, charming, and surprisingly accessible, the GLB is tailor-made for today. 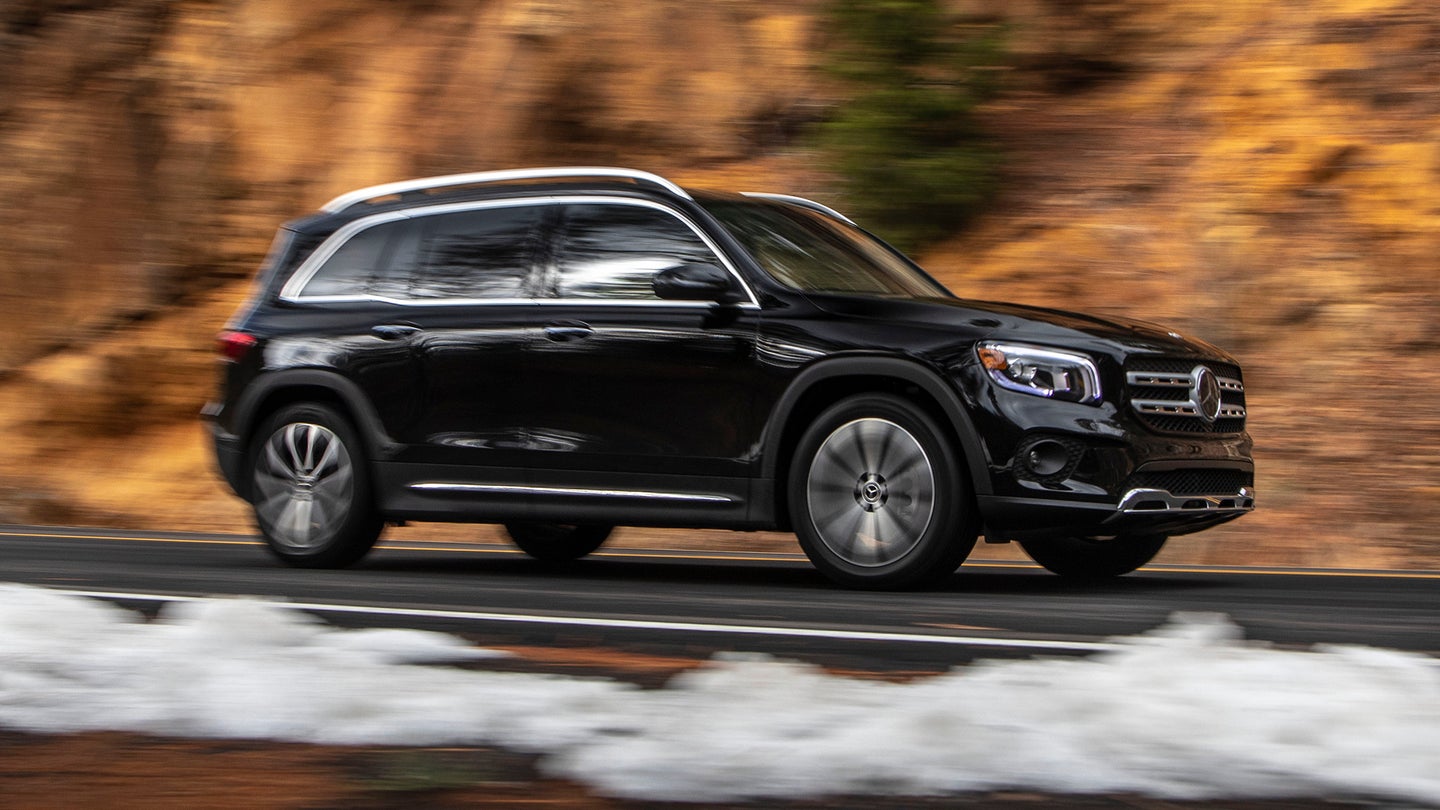 Behold the all-new 2020 Mercedes-Benz GLB 250; the three-pointed star's newest contender in the luxury crossover segment and the second model in the brand's "entry-level" class. Slotting above the minimalist GLA and below the handsome GLC, it's been sent on a mission from Germany to capture young people's hearts and wallets with the hopes that when they get older—and hopefully richer—they graduate to bigger and considerably more expensive Benzs.

At first glance, the compact GLB is nothing more than an exercise in brand dilution to offer a Mercedes for the masses. Its starting price of $37,959 poises to do the unthinkable by inviting a new class of owners into the brand—the new bourgeoisie that snobby Benz owners have nightmares about. And just look at it—it's so little. After all, the hip GLB costs exactly what Kelley Blue Book claims is the new car average price in 2019, and even less money than a fully loaded 2020 Honda Passport Elite.

First glances, however, can be deceiving.

Stare at the GLB long enough and you'll understand what Mercedes-Benz set out to achieve. It's built on the same modular MFA2 front-wheel-drive platform shared with the new A-Class sedans and just-announced 2020 GLA compact crossover. But it's no Matryoshka doll—more than 10 inches longer and two inches taller than the GLA, the GLB's boxier body packs a lot of practical character in a typically dull segment and instantly makes its mark.

That mini-GLS design has some real benefits. Outward visibility is so good regardless of seating position you'll feel you're driving the world's best-handling tour bus; blindspots are minimal, unlike in coupe-ified crossovers. The airy feeling is amplified by the minimalist center console topped with the company's turbine-style air vents and MBUX single-tablet digital gauge cluster and infotainment touchscreen (they're actually two separate LCDs, either 7 inches or 10.25 inches depending on options). Overall it's very similar to the new CLA and A-Class sedans, a great base to build upon.

Mercedes' tradition column shifter frees up space for the MBUX trackpad—which is a considerable improvement from the first-gen trackpad, and the "Hey Mercedes, I'm cold" voice command functionality is still iffy. The medium-sized storage cubby beneath the center armrest felt a little too small for the spontaneous-adventure vibe it's pulling off elsewhere. Otherwise the front seat experience is one of ergonomic perfection during our nine-hour day at the wheel, which alone would make it a top contender even if the rest of the well-appointed interior wasn't as good as it is. Material choices radiate honest quality.

Heated and cooled seats are available, as is real leather. One notable tech option is the augmented reality navigation that projects a live feed from the GLB's cameras on the center screen overlaid with floating navigation guides. It's cool. In terms of demerits, we only found ourselves wondering about the lack of oh-shit handles on the roof and a few plasticky touch points. The Tron-esque ambient lighting at night might be a little much for some. Thankfully, it's an option and color-adjustable.

The quadrate body design and stretched platform also give the 2020 GLB 250 something the competing Audi Q3 and BMW X2 can only dream of: a spacious cabin. The GLB outshines both with 40.7/39.3 inches of front and rear headroom, while the Audi and BMW make do with just 39.6/37.6 and 38.9/37.1 inches. The GLB comes out on top again with two more inches of rear legroom than the Q3 and X2. It's even got more space for your noggin than something like a midsize Honda Passport, should you cross-shop the two (and more than a few likely will). Helpfully, the second-row seats tilt and slide to accommodate any third-row passengers.

Speaking of...Mercedes-Benz didn't bring any GLBs with the much-hyped $850 third-row option for us to test. So there's that. But we've seen them in person before, and they're clearly designed for children or emergencies.

That aforementioned nine-hour test drive consisted of a multimodal loop between Scottsdale and Sedona, Arizona, that consisted of major highways, mountain curves, and dirt roads muddied by a recent snowstorm. It ended up being both a test of the 2020 Mercedes GLB 250's mechanical performance and the performance of its automatic climate control system, which was constantly adjusting for the fluctuating high-desert outside temperatures.

On the road, the GLB's platform proved its worth by offering a refined, planted ride that rivaled that of maybe a C-Class from a couple of years ago. Compared to its modern siblings, the GLB produced a bit more wind noise than we'd like due to its boxy shape, but it's something we're willing to forgive in the name of style. During a brief stint in the GLB 250 equipped with the AMG package, the larger 20-inch wheels wrapped in sportier rubber and adaptive dampers offered a slightly sportier ride though not one that seems worth the additional $5,000 you'll fork over.

Two-hundred and twenty-one horsepower isn't exactly a whole lot to work with, especially with a curb weight of 3,700 pounds, so lots of credit goes to Mercedes' eight-speed dual-clutch automatic transmission for making the most of it and delivering perfectly acceptable acceleration for the form. It's not quick—6.9 seconds is your zero to 60 time here—but it feels unburdened when asked for a burst of acceleration from a standstill or for a highway pass. Traversing curvy B-roads proved to be more satisfying than expected—especially on the stock 18-inch wheels and all-season tires—with the GLB managing its load with the composure expected from a Mercedes-Benz.

That said, you won't mistake its handling for that of a crossover riding on a rear-drive platform like the larger Mercedes GLC. The 4Matic all-wheel-drive system here is tuned to fight traction loss, not really improve performance, so it runs primarily in front-wheel drive in daily use.

Arizona is notoriously strict with speeders, a cruel form of entrapment given its sweeping desert highways with 10-mile views. The turbo-four's responsive nature and the platform's stable ride means you can end up flirting with triple digits without even realizing it—thanks, Autobahn heritage. At speed, the driving experience is best described as serene, especially with the wind noise at 90 mph drowning out any complaints from other passengers.

Where the GLB 250 finally falters is standard safety tech. The only freebies are LED headlamps, a backup camera, crosswind assist, and automatic emergency braking. Things that are starting to pop up in downmarket cars like adaptive cruise control, lane keep assist, and blind-spot monitoring are locked behind a $2,250 Driver Assistance paywall. To be fair, the package offers a bunch of super competitive extras including GPS-integrated adaptive cruise control, a lane-change system that will execute the maneuver with a press of the turn signal while cruising, and evasive steering assist.

Mercedes GLB Gets It Done

We weren't expecting to be disappointed by the 2020 Mercedes-Benz GLB, but the prospect of yet another right-sized crossover doesn't exactly thrill. It's for that reason that it feels like such a treat—at a time of cynical product decisions, Mercedes has given its excellent new contender the right tools for the job. And by the way, that job extends beyond putting Audi and BMW on notice.

Mercedes sees the GLB and its pricing as a gateway to younger, upper-market seekers of loaded cars and crossovers at brands like Honda and Mazda (to say nothing of woeful Infiniti). When the first-gen CLA debuted in 2013, Mercedes claims 70% of its buyers were first-time Mercedes-Benz buyers, lowering the median age of the entire brand by 11 years.

Don't be surprised if that story repeats itself with the GLB. That's what folks in Stuttgart call a vin-vin.

2021 Mercedes-AMG GLB 35 Is an Oddly Shaped People Mover With 302 HP, Seating for Seven

With launch control enabled, the boxy GLB 35 gets from zero to 60 mph in 5.1 seconds.

BMW’s X2 is an entertaining hot hatch play-acting at being an SUV. It’s also painfully ugly.