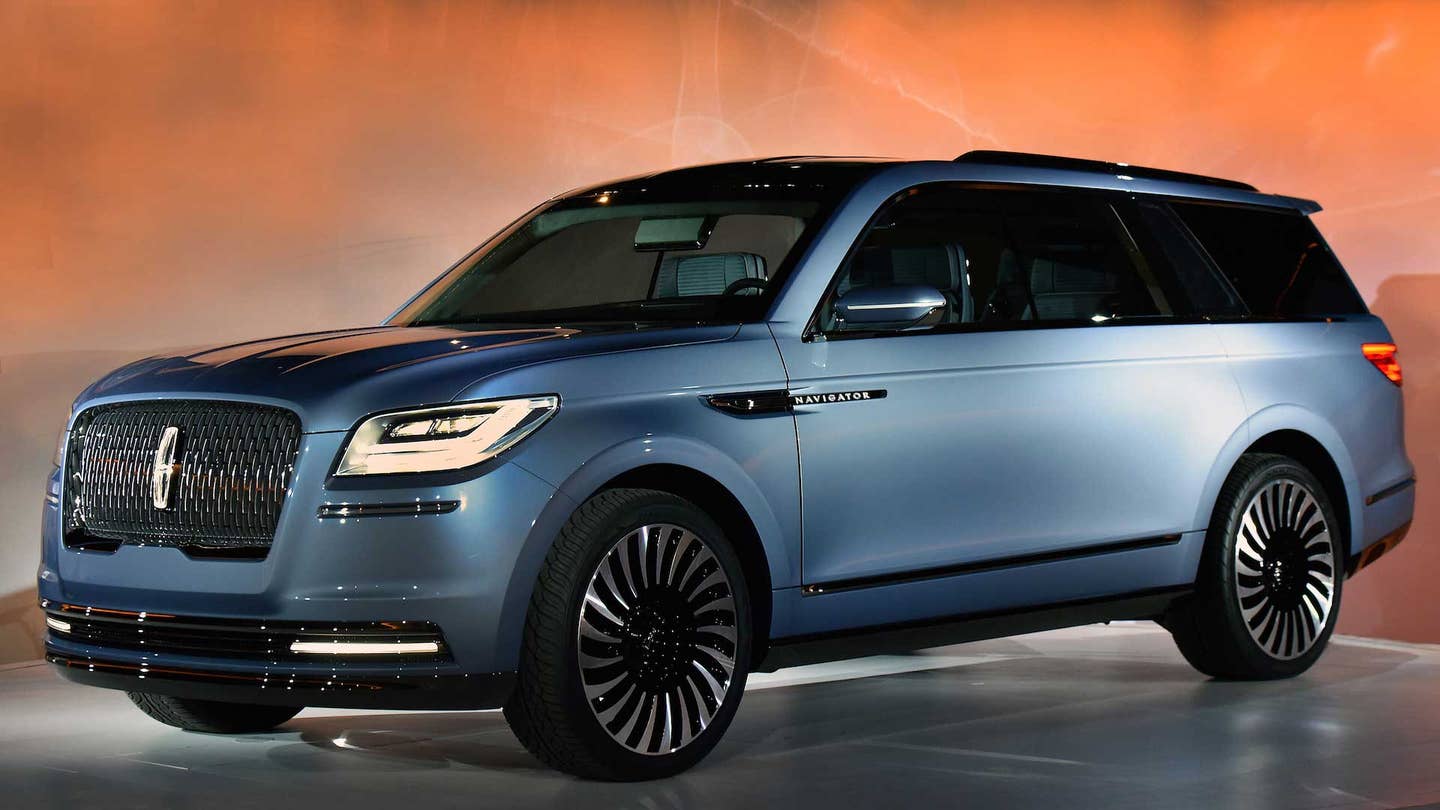 The New Lincoln Navigator Concept is the best retro thing the company has done since putting that opera window in the Continental Mk IV. Because, while the genre—a monstrous luxury SUV with more chrome baleen than a humpback with braces—is distinctly 2016, all the best bits on this charming behemoth are ripped from the family scrapbook.

Helm of the Past

First, the tiller. Remember 1968? I don't, but I hear the height of elegance was a two-spoke steering wheel, as in that year's Continental. With all that lovely space, drivers were free to wear as many signet rings as they pleased, or don the thickest leather driving gloves. Slightly plumped and in a pasty blue, that exact wheel made its way into the new 'Gator. It's simple, fat and pleasing, like a hushpuppy.

Today, carbon fiber is the luxury trimming of choice—at the the New York Show, it's impossible to plop down into anything, from the MX-5 Miata to the the Mercedes G65 AMG, without scraping knuckles across a swath of dynamic fiber. Back in 1978, though, tasted hewed a touch closer to the soft, squishy and brothel-y: Many a '78 Lincoln was outfitted with Bordello Red velour. Rather than stretching the stuff over frames, Lincoln would affix a smattering of velour pillows to a disused park bench, install it, and call it a day. In an homage to those velveteen days of disco, the new Navi includes seats with velour-look suede covered in a ribbed, athletic version of the seat pillows. Don't be fooled by Lincoln's press photos: those grey-looking seats are, in person, a period correct baby blue.

The last time Lincoln dipped a toe in automotive homage, it wasn't evoking its own midcentury successes, but coach-built luxury coupes of the Twenties and Thirties like Duesenbergs, with their spare tires affixed to the fenders, "Continental"-style, intricate chrome grillwork and, relevantly, faux-wire wheels. Check out the multi-spokes on this Lincoln Continental Town Coupe. Now, the Navigator Concept is doing an impression of that impression, with polished, 22-spoke wheels of a proportion I can barely comprehend. (It's like thinking about where the universe ends.)

All right, so this design cue isn't family-sourced—at least since Ford sold Land Rover in 2008—but, my, is it glaring. The C-Pillar on the Navigator Concept is a dead ringer for that on the current Range Rover: blacked-out, sharply angled, and overhung by a body-color spoiler/brakelight assembly. As far as design allusions go, few are more elegant than Britain's classic off-roader, and it works well. A little more continental than Continental though, eh?