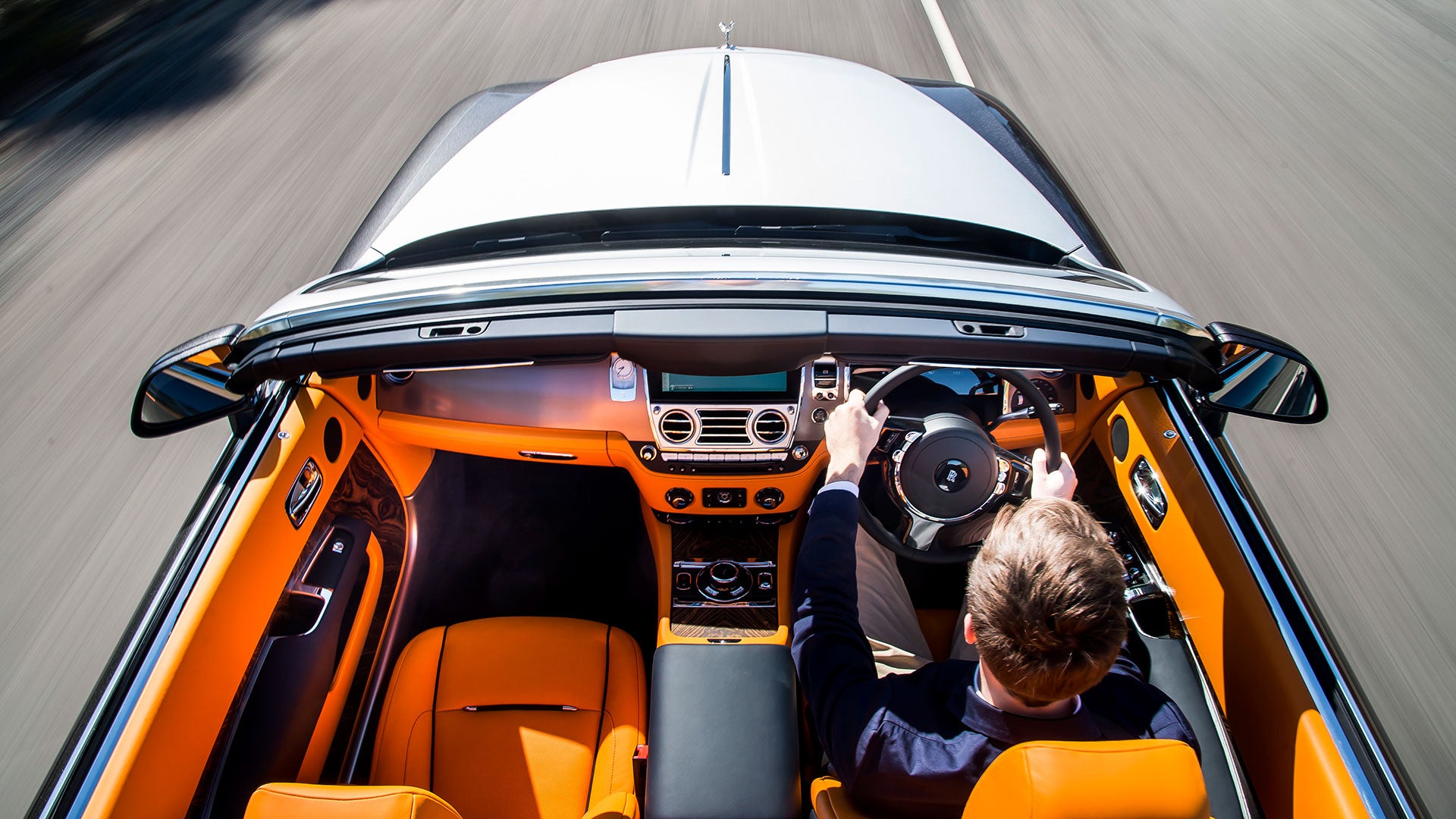 Imagine, for a moment, that you’re Torsten Müller-Ötvös. Besides being the sort of somebody who’d materialize at Griffith Observatory naked and looking to kill John Connor, this also makes you CEO of Rolls-Royce Motor Cars Ltd. It’s a position you’ve held since 2010. Business has been booming. Then, last year, you, Torsten Müller-Ötvös, announce that it’s time for “the sexiest Rolls-Royce ever.” And this creates confusion.

There is nothing “sexy” about Old World luxury. Save for the darkest, most horrifying recesses of the Internet, silver-plated Rococo soup tureens aren’t objects of arousal. Polo mallets, too, are lacking in carnal appeal. Would you like a peek under Mr. Potter’s lap blanket? No. No, thank you, I’m quite alright.

Basic underpinnings come from the Wraith, but 80 percent of the body components are new. The windshield’s lower and the roofline’s steeper, with more aggressive (read: recessed) grille slats, more front overhang, a higher hood and, consequently, more prominent Flying Lady mascot. Like all Rolls-Royce cars, most of the Dawn’s parts—chassis, electronics, powertrain—are sourced from BMW in Germany, then shipped to Goodwood, England, for benediction and assembly. Maybe this matters to you. Maybe it doesn’t. Customers are probably more concerned with Rolls’ claim that the Dawn is both the “quietest open-top car ever made” and “most rigid four-seater convertible on sale.”

And this is a legit four-seater, not a two-plus-two. The doors, dense slabs that close with a button push and soft thunk, are reverse-hinged for an easy step-in. Depending on your physique, the back seat either feels like a very large leather-padded Jacuzzi or very small leather-padded coliseum. No fold-down picnic trays, although you could probably spec those through the bespoke interior program.

Besides its sordid history with imperialism and distinction as the world’s carjacking capital, South Africa is a fine place to toot around in a monument to British opulence with no roof. The roads are smooth and the scenery is majestic. Franschhoek Pass, which winds through a sleepy village settled by seventeenth-century Huguenot refugees, looks sort of like the South of France except better. Compared to Chapman’s Peak Drive, a two-lane clinging to the mountainside around Hout Bay, the Pacific Coast Highway is basically a landfill. One large green-and-white road sign read: “FEEDING OF BABOONS PROHIBITED.” Mr. Boyle let me drive the Dawn anyway.

The seating position is lower than expected, and you're thrust upright, clavicle-deep in finery. Thin-rim steering wheel, lovely analog gauges, polished metal switches and knobs, acres of cowhide, miles of cross-stitching, and book-matched woodwork Thomas Chippendale could appreciate. There’s some BMW to the cabin, in layout and arrangement and proportion. But the Dawn’s a less cluttered space, more detailed, and an order of magnitude better for it.

Under the hood is a twin-turbocharged, quad-cam V12. It’s mechanically identical to the Wraith’s 6.6-liter lump, albeit with 563 horsepower instead of 624, and 575 pound-feet instead of 590. (Peak torque is still achieved at 1,500 rpm). You could call the engine “detuned,” but “slightly relaxed” is probably better. Rolls-Royce claims a 0-62 time of 4.9 seconds and 155-mph top speed. Imagine riding a silent, steady Percheron with exceptional manners and a snout full of cocaine. Giddyup.

The Dawn’s capable of hustling, but brisk is a better tempo. The body’s over 208 inches nose-to-tail, wider than most NBA guards are tall, and feels every bit of it. Curb weight is the better part of 5,800 pounds. Along with the size, the steering (numb on-center, lazy but accurate) and brake pedal (deep, effective) take some getting used to. Power travels to the rear wheels via eight-speed ZF automatic gearbox, which uses GPS data to dictate shifts. It is impossibly good, as is the ride quality. The Dawn retains the Wraith’s air suspension, double wishbone front and multilink rear, with active anti-roll linkages. These are neither detuned, nor relaxed, but Rolls-Royce says the added cushion of structural reinforcements and a convertible mechanism, some 440 pound’s worth, makes for smooth pushin’. This is the truth.

And, lord, that top. It is a masterpiece, a triumph. Engineers considered a retractable hardtop, but went with canvas on account of packaging and tradition. Six layers of insulation, thick fabric joined by French seams, stretched perfectly taut over a trellis of beefy crossmembers. It raises and lowers in absolute silence. Twenty-two seconds down. Twenty-two seconds back up. In the latter position, at highway speed, the Dawn’s cabin is actually quieter than that of the Wraith.

But what do we really learn from this car? That Rolls-Royce can build the hell out of a steel-body, rear-drive, V12-powered two-door? That, with enough working capital and disregard for gross vehicle weight, said two-door can be reengineered into a capable, compliant convertible? Hardly news. No, the Dawn’s important mostly because of what it does in the context of its customers.

Rolls-Royce doesn’t make cars for you or me, but it doesn’t make cars for old men anymore, either. There’s an SUV coming, and the monolithic Phantom will be replaced soon. The Wraith’s an aggressive thing by any standard, and the Dawn? It’s explicitly for a long day behind the wheel; for climbing out afterwards with red shoulders, skin a little tighter and hair a little saltier, the sure signs of an open-top adventure in the books. The world needs more of that. Priced in no man's land, sure, and the Brewester-bodied Phantom Playboy Roadster is still the sexiest Rolls-Royce ever (obviously). But the Dawn’s heart is in the right place. Take it as a harbinger, and a good omen for motoring on the whole. Enjoy your mint.