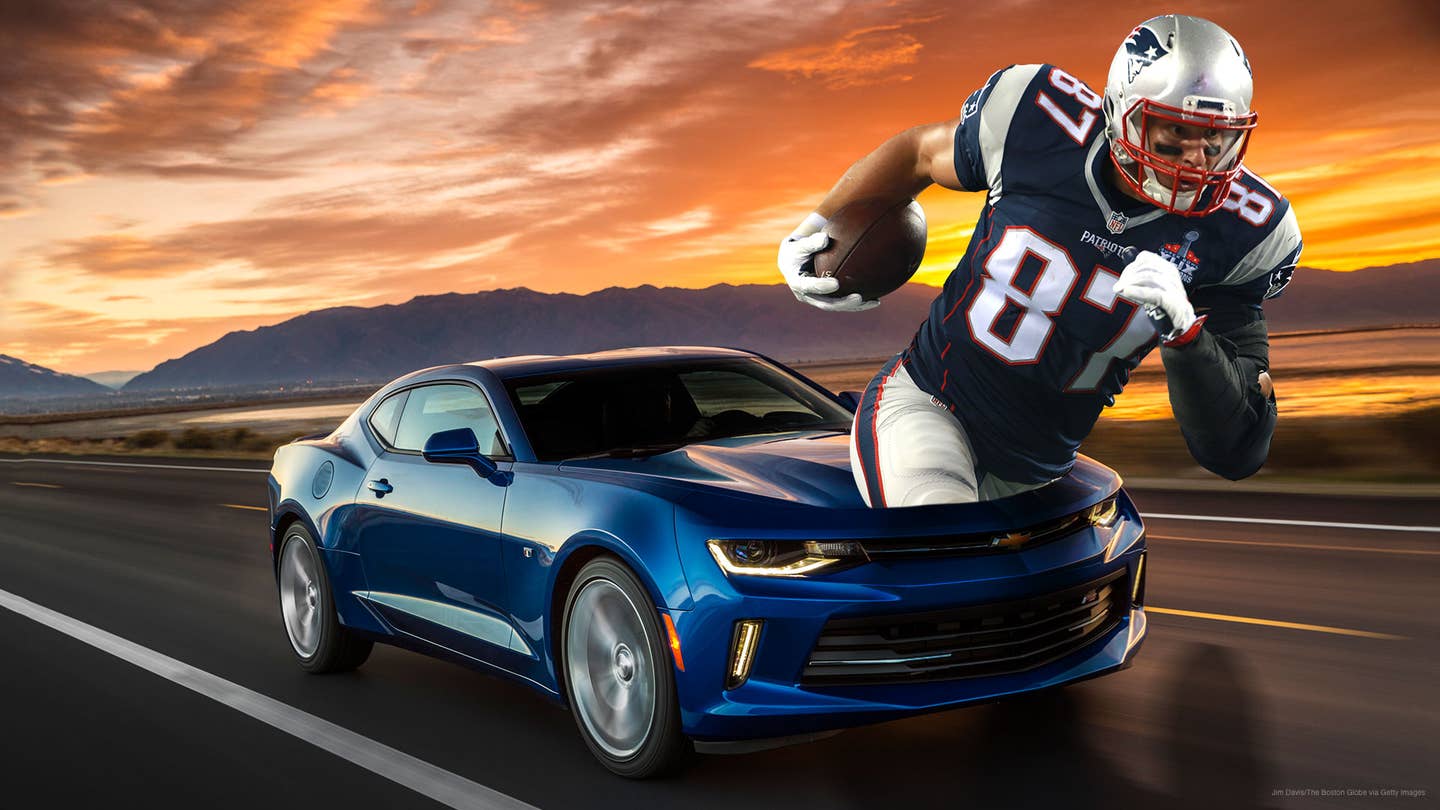 Rob Gronkowski is the physical embodiment of the 2016 Chevrolet Camaro. Here’s why.

The obvious comparison point between the Patriots’ magnetic tight end and Chevy’s reborn muscle car is power: The 2016 Chevrolet Camaro SS packs a 6.2-liter Corvette Stingray V8 in its engine bay. With 455 naturally aspirated horses snorting under the hood, it’s easy to draw a parallel with Gronk throwing blockers “out of the club,” as he did with hapless Colts safety Sergio Brown last year. Escape velocity, too. Witness Gronk slamming Brown into a sideline camera 20 feet out of bounds, and proceeding to dance over him when the Colt starter got too lippy.

But the power argument is more refined than mere brute force. Not only are the Camaro and Gronk absurdly potent, but they’re both much, much, faster and agile than they let on.

Camaros have reputations as straight-line melters with all the dynamism of a locomotive. And given its 50 years of bulky, obdurate history, you’d have ample reason to believe so. But slip behind the wheel of the ‘16 Camaro and you’ll experience something very at odds with this inheritance. The Camaro is not simply a muscle car anymore; it is a true sports car. Thanks to its all-new chassis—borrowed from GM luxury stablemate Cadillac—the new Camaro offers ride dynamics that you’d never expect.

The Camaro can sprint from zero to 60 mph in 4 seconds flat; Gronk outruns dudes weekly.

Throw on GM’s adjustable Magnetic Ride Control and torque vectoring, and Chevy has crafted a 3,685-lb machine with the nimbleness of a track car. To make the same argument for Gronk, all you have to do is watch this:

While blocking and power running are two of Gronk’s most salient attributes, rarely is his agility and catching ability given the time to shine they deserve. Witness Gronk’s one-handed catches, even if his post-TD dance moves could use some work.

Lastly, like the Camaro, Gronk is also happy to give people rides, as he’s done countless times to eager Jets, Colts, Bears and, most famously, Redskins defenders. He’s generous like that.

So agility, power, speed, explosive acceleration… both the Camaro and Gronk have all of the above in gurgling, eager, tongue-waggling gobs. It’s enough for a Mustang fanboy to spit such heresies as, “God, I hate that I love this car.”

The Dolphins know exactly how you feel, buddy.