What Exactly Is a Motorcycle Swingarm?

It’s the difference between an intact and broken spine, to start. 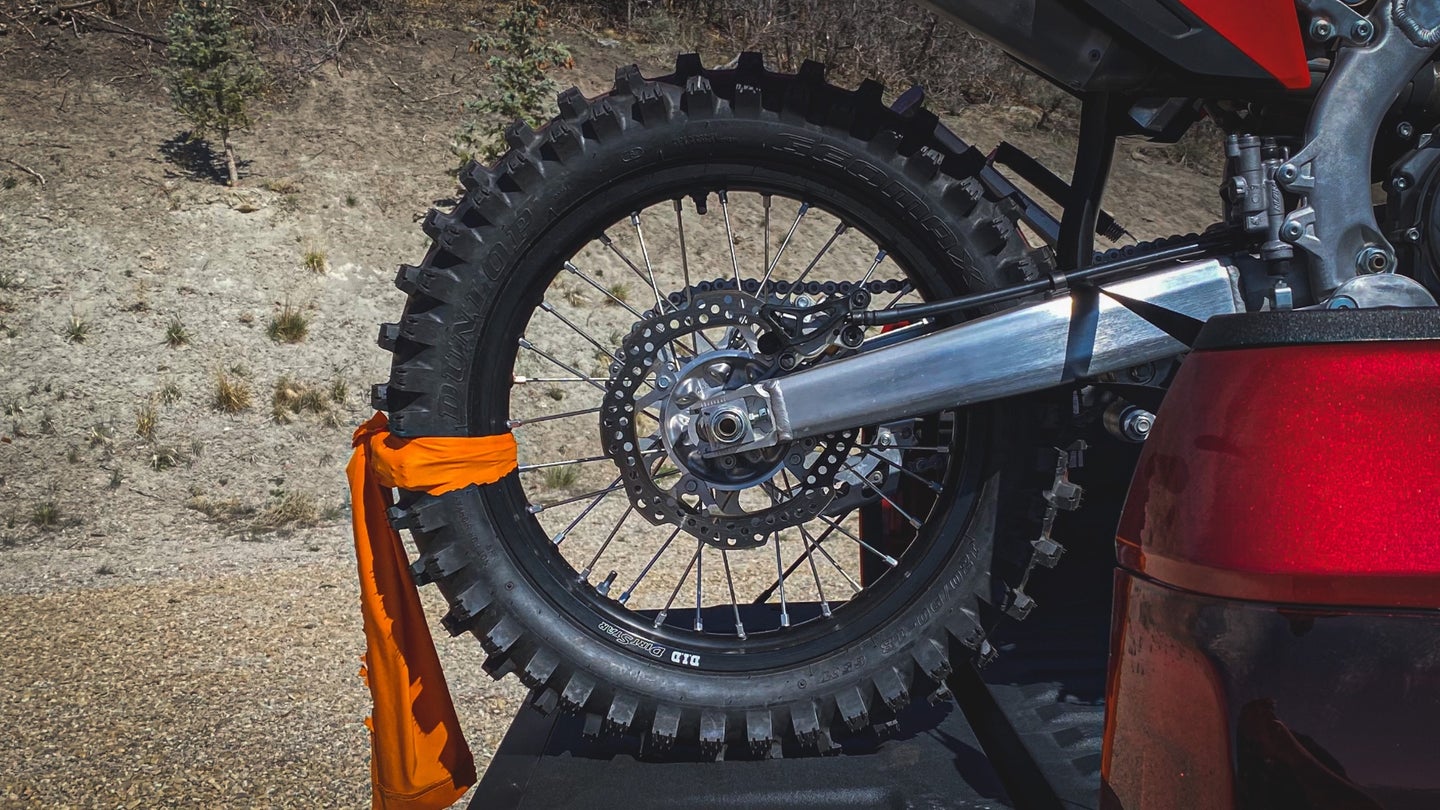 Although it offers a unique driving experience, a motorcycle is a lot like a car. It has many of the same parts and mechanicals — an engine, wheels and tires, brakes, throttle, headlights, taillights, turn signals and a plethora of other bits. There are, however, some key differences between the two, one of which is a motorcycle’s swingarm.

You might have heard the term in conversation between riders about how a lack of travel broke their spine. (Hello, Ducati Diavel!) The term refers to a specific part of a motorcycle’s rear suspension setup that’s wholly unlike a car’s suspension. It’s a part important enough to warrant a proper breakdown.

(Disclosure: When Guides & Gear wanted to do a big series on motorcycle parts, riding methods, payload carrying, and a few other stories for two-wheeled lovers, Honda came through and sent us a 2021 Honda Ridgeline and CRF450RX to play with. Look for more stories soon.)

Given that motorcycles remain abstract items to much of the population—as well as new riders—The Drive’s Guides & Gear team is here to teach you the lingo. We’re going to bring you up to speed on the most important parts of a motorcycle and indoctrinate you into the rider community, so let’s dive in with everything you need to know about the swingarm.

What Is a Swingarm and How Does It Work?

Are There Different Types of Swingarms?

There are! The H-shaped swingarm is the most common. This swingarm design connects to the chassis with the swingarm straddling the chassis, a pivot bolt, and shock and spring and the rear wheel straddled by opposing hubs. Most modern motorcycles use this design, including Honda’s CRF450RX race-spec dirt bike pictured here, as well as Kawasaki, Yamaha, Honda, and other sport, street, naked, and touring motorcycles.

The L-shaped, or single-sided swingarm design, is also pretty popular, although not as much as the H-shaped design. L-shaped swingarms feature the same chassis connection via a single pivot bolt and shock and spring but utilize only a single hub on one side of the rear wheel and tire. The result is that from the non-hub side, the rear wheel is an unbroken circle, resulting in a distinct (and some might say car-like) look.

Although most motorcycle manufacturers use a chain and sprocket for propulsion, some manufacturers actually incorporate a driveshaft into those single-sided swingarm designs, such as BMW and Moto Guzzi. Ducati and Aprilla, among others, use the design as well but with sprockets and chains.

How Does the Length of Your Swingarm Affect Performance?

Aside from suspension duty, your swingarm is a crucial performance component, and its length is particularly important. How long or short your swingarm is will directly affect how the motorcycle puts its power to the road, similar to how your sprocket’s teeth affect performance.

A short swingarm keeps the bike’s wheelbase compact and thus improves quick handling because there’s less real estate to move from one direction to another. A longer swingarm improves off-the-line acceleration because a longer wheelbase better distributes the weight of the motorcycle and engine power.

The length of the swingarm, which in part determines the wheelbase, also affects comfort and ride quality as it cruises over terrain and crumbling infrastructure.

What Is an Extended Swingarm?

I see you’ve been watching the cult classic Biker Boyz or the Fast & Furious series knockoff Torque lately, haven’t you? An extended swingarm is primarily a performance part for sportbike drag racing. It extends the motorcycle’s overall footprint for better off-the-line traction and stability. What it really does is reduce the chances that a high-horsepower motorcycle will wheelie.

However, extended swingarms have also become popular amongst some motorcycle enthusiasts who love the look and performance of a stretched-out sportbike. These come in both H- and L-shaped swingarms to varying degrees of build quality.

What Are Swingarms Made of?

Swingarms can be built of a variety of materials, the most common among motorcycles being aluminum. Manufacturers also produce them out of steel and — in rare cases for very pricey motorcycles — carbon fiber.

Aluminum is often chosen for its compromise of strength and low weight, while steel is chosen for durability. Carbon fiber is used for the best performance and strength, but it’s prohibitively expensive. The CRF450RX featured here has an aluminum swingarm.

What Is a Hardtail?

A hardtail motorcycle is a bike without a swingarm. Instead, the frame wraps around the motor and holds the rear wheel hub. This style of frame is traditionally something you see in the cruiser community and old-school choppers of the Indian and Harley-Davidson variety.

These often have springs or shocks built into the motorcycle’s seat so your spine doesn’t shatter after hitting a pebble in the road.

Learn More in This Video Tutorial

That’s a bunch of text, I know, so for those who crave visual aids to understand a subject, please watch motorcycle journalist Ari Hennings give you a full rundown on swingarms.

Q: Is there a perfectly sized swingarm for my motorcycle?

A: That’ll depend on what you value. Do you want straight-up speed? Or do you want to pop wheelies at 150 mph? It all depends on what you're looking for out of your bike.

Q: Why is it called a swingarm?

A: It was actually first called a swing fork, as the structure sort of looks like a fork straddling the tire and, well, it swings up and down. Swingarm was later adopted because it also sort of resembles your arm moving up and down.

Q: Should I upgrade my suspension if I change my swingarm?

We’re here to be expert guides in everything How To related. Use us, compliment us, yell at us. Comment below, and let’s talk. You can also shout at us on Twitter or Instagram or reach us all here: guidesandgear@thedrive.com.