Here's How Motorcycle Sprockets Can Dial In Your Bike's Performance

Yes, Fraggle Rock’s dog was named after a motorcycle part. No, they’re not interchangeable. 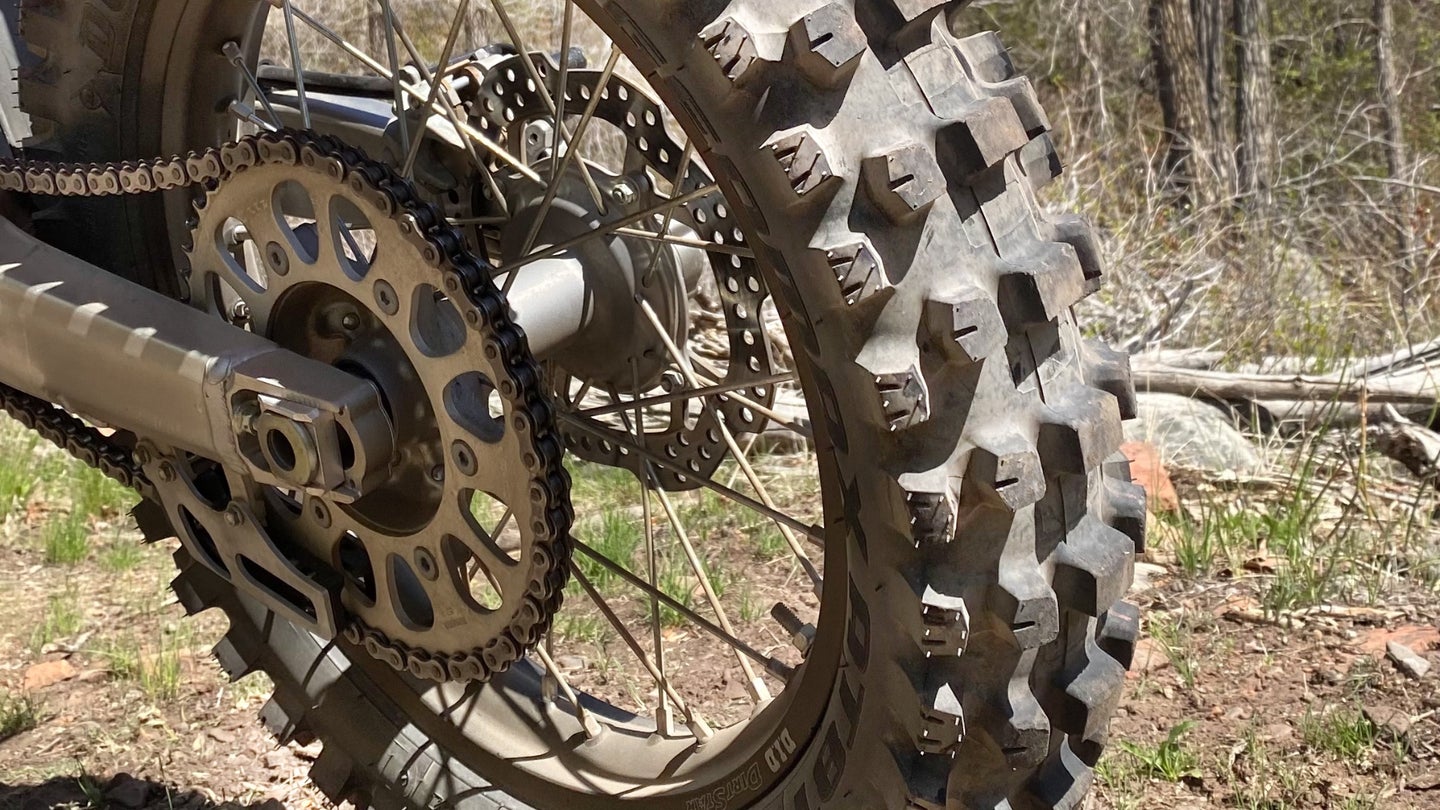 Motorcycles aren’t the wondrously complex machines many people make them out to be. Although outside observers might see a bike as a delicate ballet of rider inputs and bare suspension scaffolding, it’s actually no more intricate than your car. There’s an engine, transmission, wheels, and a similar set of drivetrain components that make the motorcycle move and allow you to enjoy the freedom that only two wheels can offer. Simple!

There is one key difference between most cars and motorcycles, though, and that’s how almost all motorcycles translate engine power to momentum. Although most cars use a driveshaft to transmit engine power through the transmission to the driven wheels, most motorcycles use two sprockets and a chain, just like your average bicycle. It’s a technology that dates back to the third century B.C. More on that in a bit.

(Disclosure: When Guides & Gear wanted to do a big series on motorcycle parts, riding methods, payload carrying, and a few other stories for two-wheeled lovers, Honda came through and sent us a 2021 Honda Ridgeline and CRF450RX to play with. Look for more stories soon.)

Understanding how your motorcycle works will help you when it comes time for maintenance. It also gives you a better understanding of the machine you ride, an idea the Guides & Gear editors totally support. To satisfy the curious, we put together a helpful and historical guide to explain what a motorcycle’s sprockets are and how they work. Gather ’round.

When Was the Sprocket Drive Invented?

A long, long time ago in a galaxy far, far away. According to the University of Glasgow, the chain-driven sprocket drive was invented sometime before 3 B.C., with the first application detailed by Greek engineer Philon of Byzantium.

Rather than propel a bicycle — those weren’t invented until 1817 A.D. — the sprocket-driven chain drive drove an automatic crossbow known as a ballista. Detailed in Scientific American, the drive was connected to a windlass, which supplied power for the machine, and would wind the crossbow’s mechanism back and forth to shoot and supply new arrows. It’s not exactly the same, however. There were key differences between the one used to propel a volley of arrows at one’s enemies and a modern-day motorcycle’s sprocket drive. For example, the chain drive didn’t transmit the windlass’s power from sprocket to sprocket, so it didn’t supply power endlessly as modern drives do.

The first endless sprocket chain drive, i.e., the basis for the modern sprocket-driven chain drive, wouldn’t show up until 10 A.D. in a treatise by Chinese astronomer and mathematician Su Song, according to “Science and Civilization in China.” He used the drive to power an astronomical clock, the first of its kind. Leonardo da Vinci is in the mix, too. The scholar sketched what appears to be the first steel chain, according to the Tsubakimoto Chain Co.“ These chains were probably designed to transmit pulling, not wrapping, power because they consist only of plates and pins and have metal fittings. However, da Vinci's sketch does show a roller bearing.” Neato.

Anatomy of a Motorcycle Sprocket Drive

Before we get into how a motorcycle’s sprockets work, we need to talk about the two types of sprockets and why they look the way they do.

The countershaft sprocket, also known as the transmission/front sprocket, is connected to the motorcycle’s transmission and is the smaller of the two sprockets.

The wheel sprocket is connected to the motorcycle’s rear wheel and is the larger of the two sprockets.

It may seem basic to explain what a motorcycle chain is, but it’s helpful in this instance. A chain is a set of interconnected steel links with pin joints that form a loop. The chain wraps around and works together with the sprockets.

How Does a Motorcycle Sprocket Work?

With all that whirring around your head, it’s time to detail how a motorcycle’s sprocket actually turns energy into BRAAP!

I mentioned in the anatomy section that the size of the sprockets can affect your gear, so let’s dive into that.

As for how tooth counts affect acceleration, top speed, and overall fuel consumption, it can be slightly confusing since changes to one sprocket aren’t what you’d make to the other. Say you want to increase your motorcycle’s acceleration. You can lower your gearing either by reducing the teeth on the countershaft sprocket or adding teeth on the rear sprocket. Those changes make for snappier responses. Raising the gearing of your motorcycle — increasing its top speed — is the direct opposite, meaning you add teeth on the countershaft sprocket or reduce teeth on the rear sprocket.

Other Types of Motorcycle Drives

Although most motorcycles use a sprocket-driven chain drive, there are a few others that use other systems. Here’s a brief guide on those.

A belt-driven motorcycle, like most modern Harley-Davidsons, feature a thick rubber belt that connects the transmission and rear wheel together instead of a chain.

A shaft-driven motorcycle works much like a car, with a driveshaft connected to the transmission and a rear gear that spins the rear wheel. BMWs often employ this design. 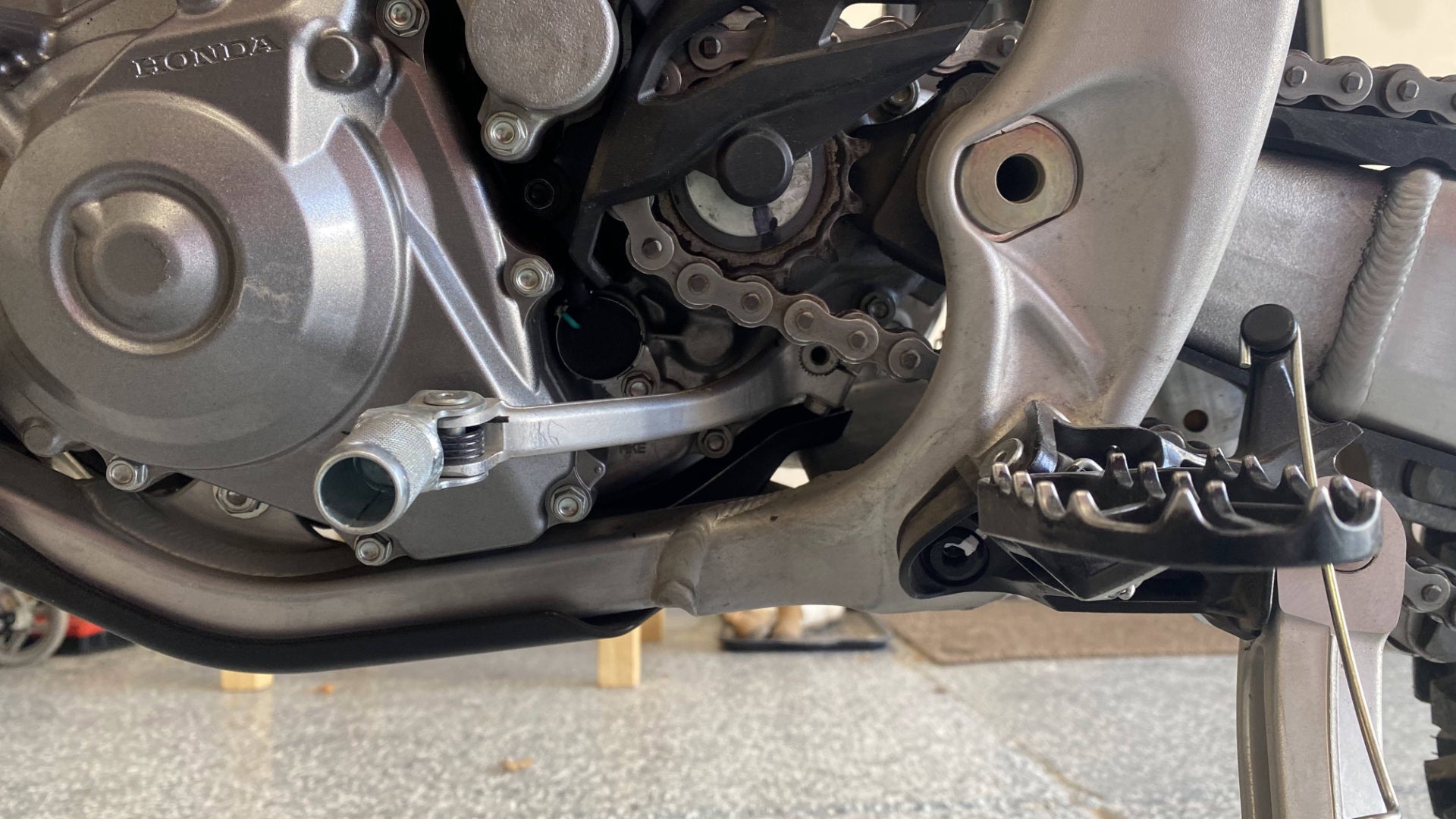 The countershaft sprocket behind the shifter and foot peg. Jonathon Klein 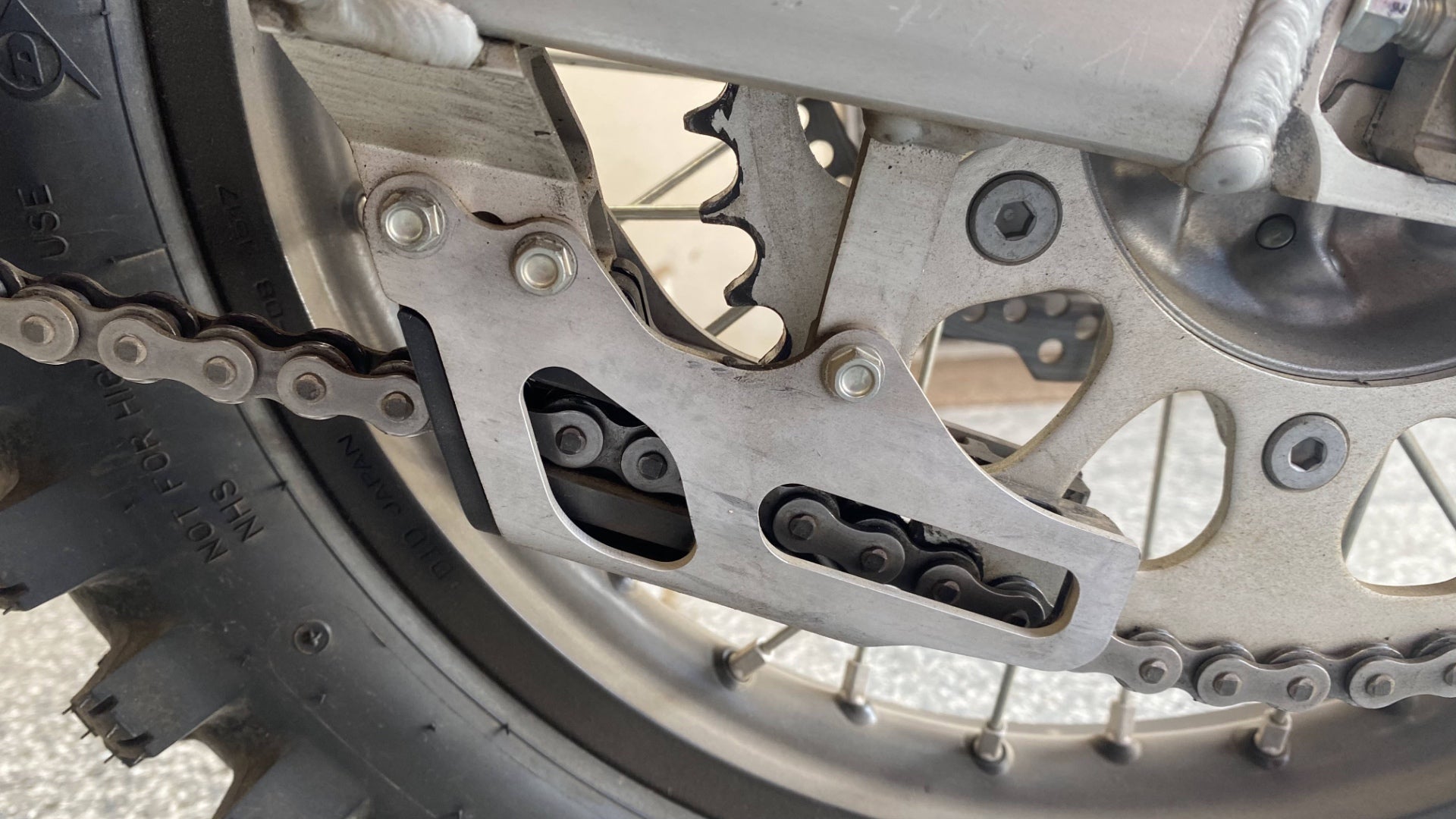 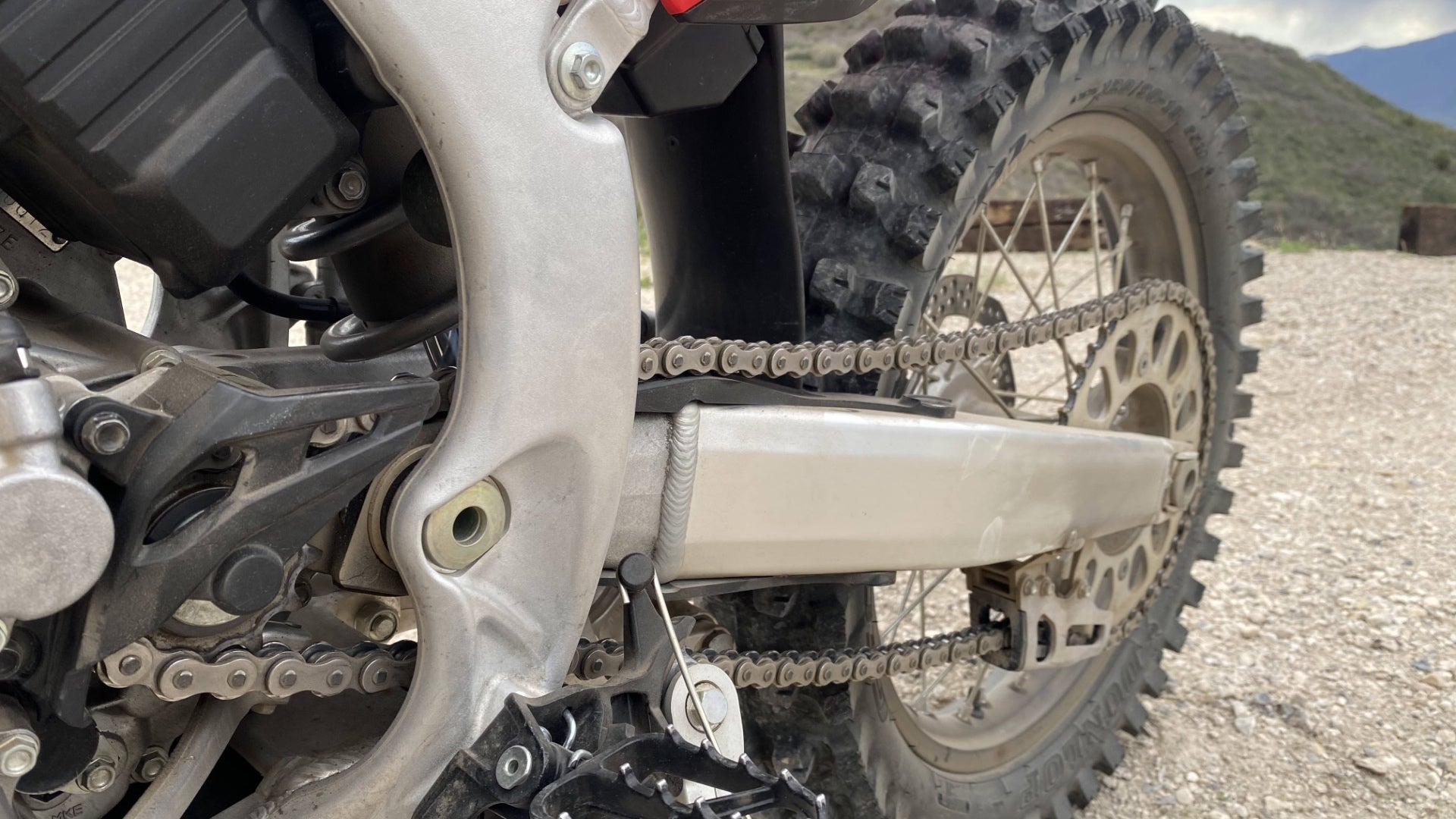 The countershaft sprocket connected to the rear sprocket via the chain. Jonathon Klein

Q: How do I choose the right sprocket for my motorcycle?

A: What do you want out of it? Do you want lightning acceleration, good gas mileage, or all-out top speed? Do you want a balance of the three? Answering those questions will dictate which type of sprocket you want to upgrade your motorcycle with.

Q: How much do sprockets typically cost?

A: Countershaft sprockets can range between $10 and $40, depending on the make and model. Wheel sprockets typically go for between $40 and $100. Full kits can cost a couple hundred dollars.

A: That’ll depend on a host of factors, though the chief one is you. How you ride and maintain your motorcycle will directly affect how long your sprockets last. Other factors include riding conditions, usage rates, and storage.

Q: What’s the difference between steel and aluminum sprockets?

A: Weight mostly, but the steel sprockets generally last longer than the aluminum ones.

Learn More in this Video about Replacing Motorcycle Sprockets

To assist folks who learn better with visual aids, here’s one of the best in the business explaining motorcycle sprockets and mods, Ari Henning.