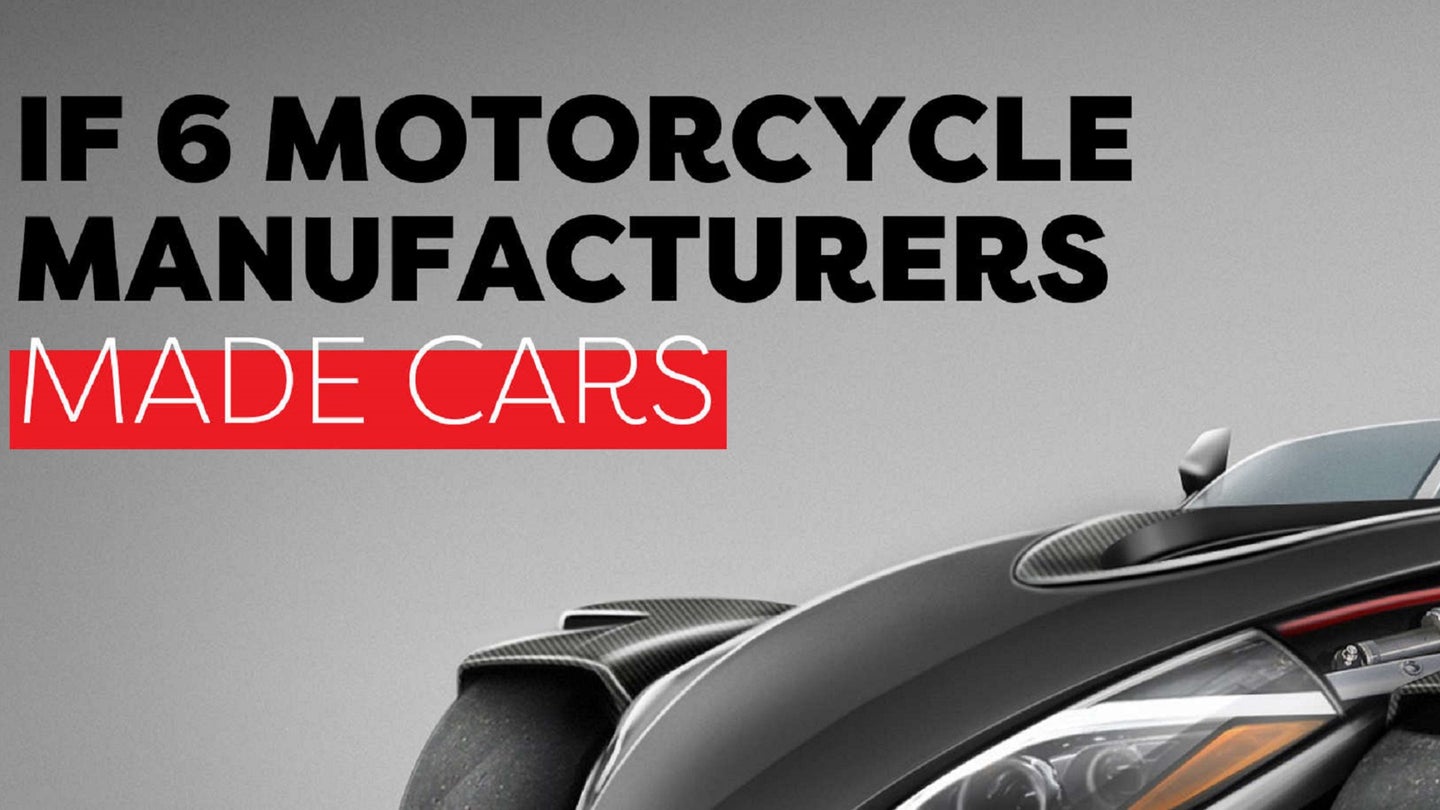 We've seen what happens when the people who normally design cars design a motorcycle—you get the Honda Pacific Coast 800. But what if motorcycle companies started building cars in their own unique style? The folks at Jennings Harley-Davidson have ventured six guesses as to how they would look, and not just for Harley-Davidson.

Harley's look like a classic American hot rod, which is pretty much what you'd expect from a company whose styling seems stuck in the past, even if its technology isn't. The exposed engine with a V configuration (in this case a V8 rather than a V-twin), straight pipes, and wide whitewall tires go perfectly with Harley's classic styling, which includes lots of chrome and a leather trunk in place of saddlebags.

The Aprilia design drew inspiration from the Dorsoduro 900 supermoto rather than the large sport bikes the company is best known for today. As a result, the car looks like a sporty little rally fighter than a true sports car, with an enclosed interior, rally lights, and high ground clearance that could clear many off-road obstacles despite the car's street tires, very much like the Dorsoduro 900 is equipped.

Ducati's looks like a cross between parent company Audi's cars and the Diavel, with its exposed cage by the passenger compartment resembling the Ariel Atom. The suspension is exposed, as are the seats to fully immerse you in the driving experience.

Kawasaki, on the other hand, looks very much like the Japanese-designed sports car it would be, perhaps inspired by the stupidly fast Ninja H2. The neon green accents around the car certainly are and they are quite appropriate on any Kawasaki.

Triumph is the one company on this list that has actually built cars as well as motorcycles. It's no surprise that this render looks a bit like resto-mod TR7. It also has a bit of American muscle car influence, inspired by the Bonneville and the salt flats in Utah for which it is named.

Vespa never made a car, but if it did it would be as cute and distinctive as its scooters. Adding some styling inspired by another icon of a cute car, the VW Beetle, gives us this cute little two-seater. The covered rear wheels resemble those of the scooter that hides its tiny engine from view. Would the car's engine also be in the back, like the actual Vespa and Beetle? There's certainly room.

Check out all of these concept renderings at Jennings Harley-Davidson.