Air flow is absolutely necessary for your engine, that is unless it’s leaking in through the intake manifold. 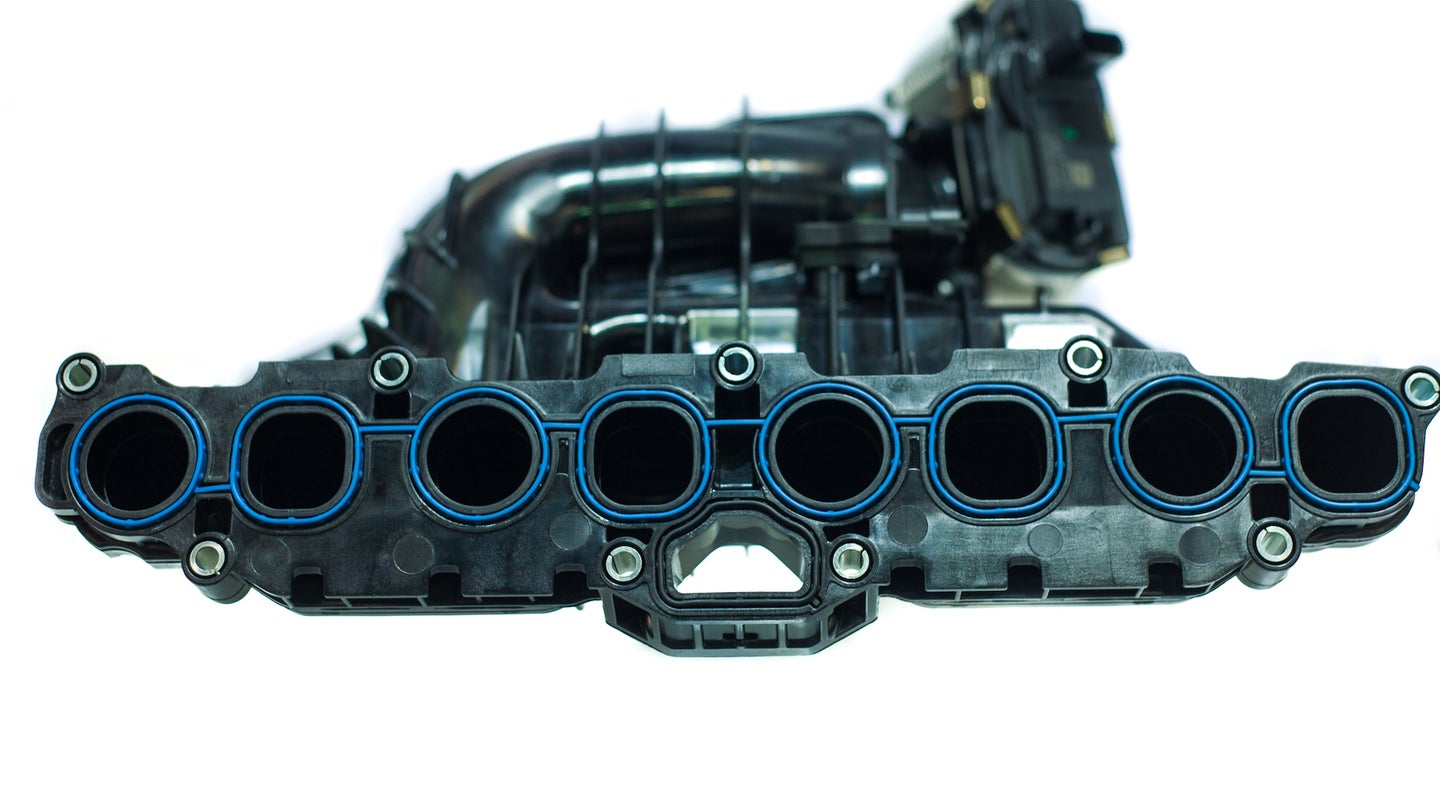 If you think about it, there are things about your car that just don’t make sense. You’ve been told that more air is a good thing for power, that a cold air intake, more scoops, more vents, etc, are a great way to get more performance. Those are technically all true, but let’s walk that line of thinking back a bit by talking about a leaking or damaged intake manifold.

Can there be too much? The answer is that though more air is generally good, it’s important to know that unregulated air flowing into the engine can become a massive problem. Extra air coming into the engine that your car’s computer doesn’t know what to do with or where it came from leads to big issues for its air-fuel ratios which, you know, create the oomph that drives your ride.

So, a leaking intake manifold is bad. Damage to the component can mess with the coolant system and could cause stalling or worse. What is the intake manifold? Why is it important? Let The Drive’s blowhard editors drop some knowledge on you.

What Is An Intake Manifold?

The intake manifold carries air to the cylinders. Along with the throttle body, air intake, and fuel delivery system, the manifold helps deliver the appropriate air-fuel mixture for combustion in the engine.

Intake manifolds are built with a couple of main components, which include the plenum and the runners. The plenum is a reservoir that holds air until it’s needed in the cylinders. The runners carry that air from the plenum to each cylinder head.

How Can I Know If Something Is Wrong With My Intake Manifold?

No, you won’t get a “Danger to Manifold” pop-up on your dash or your circa-2000 laptop midrace. That’s just in the movies. However, when the intake manifold starts to go, a few things will start to happen to tip you off, such as:

If a gasket or the manifold is damaged in some way, coolant will eventually escape and leak underneath the vehicle. This will generally be different and more prominent than the condensation you see under the car in summer while running the air conditioner.

The same is true for the engine’s cooling system. If the intake manifold is going, it can lead to a coolant leak, which may cause the engine’s temperature to rise.

If there’s an air leak in the manifold somewhere, too much air can enter the engine, which will change the idle speed. The car may even stall at lower speeds.

An air leak might cause the car’s computer to balance out the equation by adding more fuel. This means that the engine is using more fuel to accomplish the same amount of work.

Can I Drive With A Bad Intake Manifold?

While it’s probably possible to drive with a bad intake manifold, it’s certainly not advisable. Even if you can make it safely to your destination - which is hopefully your local mechanic - you may end up causing other damage to your vehicle in the process. That could include overheating and fluid loss or even something as serious as an accident if the car stalls while in motion.

How Much Does It Cost To Fix? Can’t I Do It Myself?

Unless you’re an experienced home mechanic with the proper tools and a safe place to work, it’s probably best to leave manifold work to the pros. The steps to remove, replace, and safely reconnect everything can be difficult to understand without experience, and the consequences of messing something up can be serious.

Having said that, it’s important to note that paying someone to fix an intake manifold won’t be cheap. On average, expected to pay between $400 and $600 for repairs. Most of that expense is related to labor, which can run upwards of $400 on its own.

Coolant is a liquid in the radiator that is designed to change the freezing and boiling points of water, which keeps radiators from freezing or overheating. It also helps lubricate the parts it touches, which can help prevent damage to critical parts like the water pump and head gasket.

A stall just means that the engine has stopped turning for one reason or another. In the case of an intake manifold gasket, the problem is related to the engine not receiving the proper amounts of fuel or air, either of which can cause major issues with standard engine operation.

The air-fuel mixture is the ideal ratio of both air and fuel to keep the engine running properly. It’s also vital for proper ignition timing and ignition in general, where the location, timing, and duration of combustion is important.

The throttle body is part of the air intake system. It controls the quantity of air flowing into the engine.

The air intake is designed to bring air into the engine. It’s usually a long tube that runs from behind the grille into the engine. It passes through a filter, and will usually pass through resonator chambers, which are in place to help smooth air flow.

Sometimes You Need a Certified Mechanic

As much as The Drive loves to put the "you" in do-it-yourself, we know that not everyone has the proper tools, a safe workspace, the spare time, or the confidence to tackle major automotive repairs. Sometimes, you just need quality repair work performed by professionals you can trust like our partners, the certified mechanics at Goodyear Tire & Service.

FAQs About The Intake Manifold Gasket

Q: I Think There’s A Leak In The Gasket, But I Don’t Want To Replace It. Can’t I Just Patch It?

A: There are products, such as silicone sealants, that can help close leaks. We’ve compiled a list of our favorites ones.

Q: I Want To Add A Cold Air Intake. Will This Mess With My Air-Fuel Mixture?

A: It shouldn’t, but there are other issues to worry about. If you’re buying one of those big-tube air intakes, you’ll want to be sure that the filter is made to withstand the test of time. You’ll also want to position it in the engine compartment to avoid sucking up water from puddles and rain. Water doesn’t compress, so it’s not going to do your engine any favors.

Q: Why Did Brian O’Conner’s Laptop Say “Danger to Manifold” In the O.G. Fast and the Furious?

A: Movie magic? Yeah, it made no sense. The piece that then drops off from the passenger footwell is part of the floorpan, which makes even less sense!

Q: Did Fast and the Furious Lie to Us?

You have plenty of options when it comes to products to help you resolve a failing intake manifold. We’ve got our favorites, too, but we’ve chosen the top three to help you get started with the most affordable products that carry the best customer reviews.