Before you lower your car in the name of cornering, learn what roll center is. 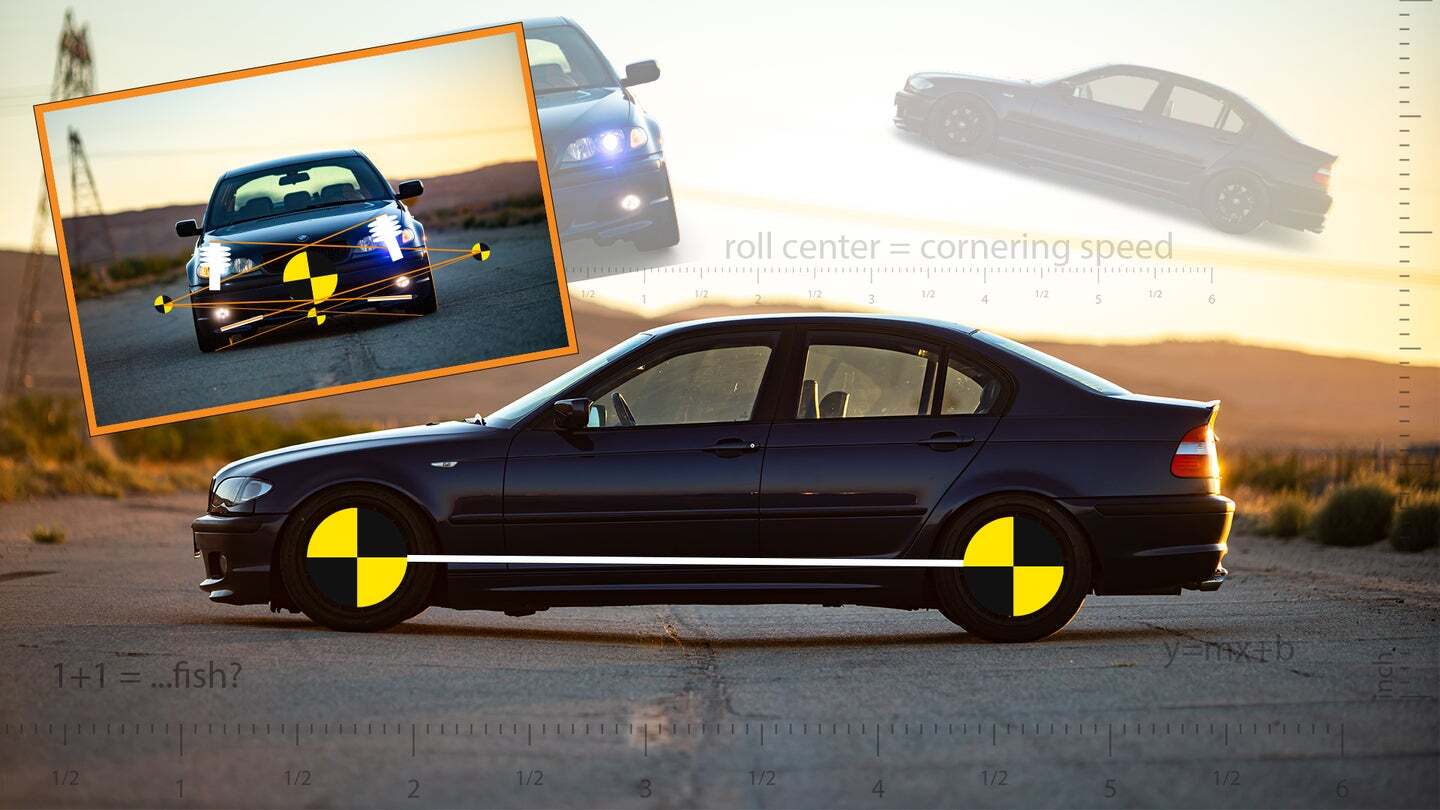 Some of us are pursuing greater cornering performance, some just want the low-car look. But regardless of why you want to change your car's ride height, you'll want to know what roll center is before you start messing around.

There are many methods by which to carry some extra speed (the simplest of which is just getting better tires), or we could go as far as fitting lowered springs or even aftermarket coilover suspension on our cars. Common wisdom says that lowering a car is always better, right? Well, not exactly. Roll center is the invisible hinge on which the entire dynamics of the car moves about.

The main argument I hear cited in favor of lowering a car's ride height (besides looking cool) is that it lowers the center of gravity, which, sure, it does do that. Usually, lowered springs or coilovers will also be stiffer, helping the car roll (or lean) less in corners. On paper, that’s great! But in reality, it’s not quite that simple. When you lower a car, you are messing with a delicate balance that the suspension engineers aimed for when they designed the thing.

Automotive engineers, the smart boffins that they are, know exactly how much the body will roll in turns, how much suspension travel there is, the center of gravity along the entire spine of the car, and what the suspension will geometrically and mechanically do over bumps and different ride heights. We can physically see the control arms, the bushings, the joints by which all of the suspension arms move easily. There is an extra dimension to the complexity of that because the four corners of the car don’t work independently. No, not sway bars, but roll centers, instant centers, and the roll axis are the invisible magic of suspension.

So, what is roll center? Basically, it’s the point in space that the car body rotates around. There are two roll centers in most cars; the front suspension and the rear suspension. Together, they form what's called a roll axis; a line drawn through the two roll centers. For now, let’s focus on what makes a roll center and instant center happen.

Like anything geometric, we’re gonna be drawing some lines. You can calculate the roll center of even your car with some simple math. You’re gonna be drawing seven lines total for both sides of the suspension. Start by drawing a vertical line that denotes the center of the car. From there, I’m gonna use a rough estimation of a MacPherson strut suspension, a common setup for most modern cars.

Your most important line is going to be the line you draw from the control arms. Basically, draw a line that goes through the inner and outer control arm joints and extend that line out inward from the tire. This line is your anchor for the rest of the roll center because the angle of the control arm(s) determines how the car will roll.

From that, we’re going to draw another line. With this MacPherson strut setup, you’re going to draw a line exactly perpendicular (or 90 degrees) to the strut axis. You wouldn’t notice it normally, but struts are actually leaned in towards the center of the car for other suspension reasons that have more to do with steering. Anyway, we draw that line until it meets with your other line from the control arm. Now, we have an instant center. Nope, not a roll center yet. And yes, it’s normal for the instant center to be outside of the wheel.

Now that the math has been done to find the roll center, we can understand why it’s important. The roll center and the instant centers are not fixed virtual points, they’re actually constantly changing when the suspension moves through its stroke, and especially when the body of the car is leaning.

Automotive engineering for street-legal cars is full of compromises. This roll center and center of gravity relationship ends up being one of the big compromises of suspension design. Sometimes, cars have funky geometries and roll centers to compensate for an excessively high center of gravity. This is also a big reason cars like the Subaru BRZ handle extraordinarily well; they have an exceptionally low center of gravity, making figuring out roll centers and other geometry much easier. It’s one of the most important relationships in vehicle dynamics, as important as camber, caster, and toe.

Practically speaking, there is a certain aftermarket supply for advanced suspension setup parts. It isn’t common, and generally, it’s only for cars that track rats love: think EG/EK Civic, S2000, 350Z, Miatas, Toyobaru twins, the like. Those sorts of cars will have kits for roll center adjustment, usually actual spacers or custom ball joints. Beware of some parts that claim to be roll center adjusters, but are actually just garbage. If the adjuster doesn’t move the lower ball joint relative to the hub, it’s a dud.

The rest of us with weird cars will have to adjust roll center with coilovers and some basic practical math. Perhaps I’ll do a DIY in the future, but for now, there’s your primer on the great unseen part of your suspension. Don’t over-lower your cars, and be aware of what’s going on when you do! In the meantime, I’m going to figure out a system for measuring roll center in your driveway, stay tuned.

This will upset muscle car purists.