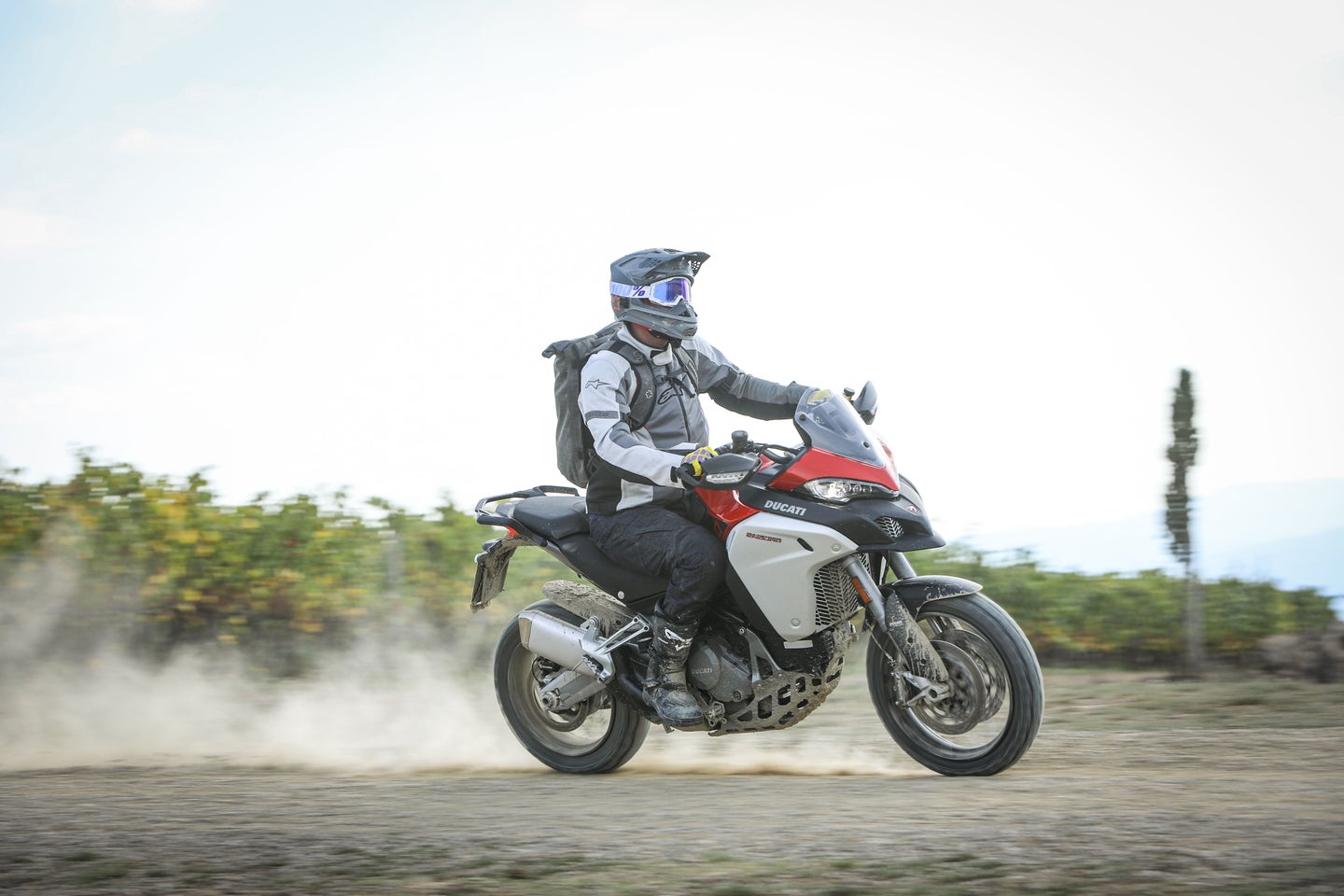 A New Era at Ducati

Ducati’s line of off-road focused Multistrada’s is the youngest adventure bike amongst the big brands in the motorcycle industry. Introduced in 2016, the Multistrada 1200 Enduro lived up to the namesake of many roads by being able to venture almost anywhere. However, it was also plagued by a number of issues that made it difficult to manage when the going got truly tough. It was too tall, which made it extremely top heavy, and the standup riding ergonomics verged on cumbersome.

Today, Ducati introduces the 2019 Multistrada 1260 Enduro to correct those issues and also deliver more approachable adventure motorcycle. Big features include an increase in engine displacement and power, improved ergonomics, better weight distribution, and a slew of rider-focused technology to enhance the experience. The company gathered a small group of journalists in Italy last week to test the new Multi both on- and off-road to see where it ranks in the ever-growing adventure motorcycle market.

Nestled in the hills of Tuscany is Nipozzano Castle. Constructed in 1457 with grounds spanning over 1,500 acres of rolling hills and wine-producing vinyards (they make a nice Chianti), it's also home to the Ducati Riding Experience academy where aspiring adventure bike riders can come and learn how to wrangle the mighty Multi. The area's twisting roads and rugged, tree-lined trails offer a perfect proving ground.

The day began with the 1260 Enduro kitted out for an all-out street and touring assault. Armed with Tourtech hard panniers, tall windscreen, and Scorpion Trail 2 tires, we ventured out into the countryside.

I began the first leg of the ride in Touring mode, one of the four preprogrammed ride modes. As we snaked through the lush Tuscan countryside, I was in command of all 158 horsepower from the growling 1262cc Testastretta DVT L-twin, but throttle response remained as smooth and tempered as a well-balanced Cabernet Sauvignon.

The Ducati Safety Pack, which controls the various levels of computer intervention, sets DTC (Ducati Traction Control) and DWC (Ducati Wheelie Control) to higher levels in Touring mode to ensure a less aggressive and but still spirited ride. Regular and cornering ABS are also on high alert as well.

With the roads beginning to tighten and traffic starting to subsisde, I flipped the 1260 Enduro into Sport Mode courtesy of the new and rather intuitive UI setup Ducati's calling a "Human Machine Interface." A twist of the wrist resulted in a sharp unfurling of power. With ABS, DWC and DTC interventions more muted and the suspension firmed up, it was time to play.

The 1260 transformed itself into a canyon-carving tourer capable of backing it in and performing power wheelie exits. With the Ducati Quick Shift tech, smashing up and down between second and fourth gear served up effortless acceleration and controlled rev matching on downshifts.

Stopping power comes courtesy of a pair of Brembo M4.32 monobloc radial calipers with four 32-mm diameter pistons on twin front discs. At the rear, a Brembo 265 mm disc is gripped by a floating caliper. The result is a strong an efficient bite under aggressive riding with excellent feedback throughout.

In true Multistrada fashion, the 1260 Enduro is sublime and perfectly suited for long stints on the highway and even on tight technical canyon roads. But with the moniker of Enduro readily touted, how did the new Multi stand up in the dirt?

Looking for the full experience, we traded in our road-going Multistradas for ones with a more off-road focused setup. We ditched the saddlebags, mirrors, and rubber footpads, adding a shorter windscreen and a set of knobby Pirelli Scorpion STR tires.

Heading out into the grounds of Nipozzano, we began along numerous craggy dual track trails flanked by trees and sloping hills. In a standing position, I instantly noticed how much of an ergonomic improvement the 1260 Enduro represents over its predecessor. The narrower seat and tank inlays allowed for more freedom of movement and lower body control over the machine. I felt like I was atop a nimble tiger rather than a tall, lumbering horse.

By slightly lowering the saddle and bringing the suspension down from 7.9 to 7.3 inches, the Multistrada 1260 Enduro feels like a smaller motorcycle even though it weighs roughly the same as the 1200 Enduro. The height reduction lowers your center of gravity on the bike, making it more maneuverable and manageable. The 1200 really was too top-heavy; that's no longer the case.

The 1260 Enduro never missed a beat as we ascended into the nearby mountains. Though the power figures of the 1260 Enduro are pretty much in line with the outgoing 1200, it’s how that power is delivered that makes this motorcycle such a vast improvement off-piste. Power delivery is deliciously linear and smooth with torque readily accessible starting around 2,000 RPM—nice and low, exactly where it's needed in low-traction situations.

Once I became a tad more comfortable and confident on the 1260 Enduro, I unlocked all 158 horsepower from the diminished 100 horsepower in Enduro mode and further customized the throttle response to my liking. From there, the bike just became more fun and ever faster, though never uncontrollable. Stability is always a concern when you're talking about a machine this large, and while Ducati made a great effort to lower the center of gravity, the updated DSS (Ducati Skyhook Suspension) system is a big help as well.

By utilizing a Bosch 6-axis IMU (Inertial Measuring Unit) and semi-active suspension, the 1260 Enduro is able to analyze and keep the bike balanced and stable while minimizing any extreme change in attitude. The result is a smoother and more confident ride regardless of the conditions. Off-road, I felt more connected to bike as it worked with me instead of against me.

Technology is making big bikes (and even smaller motorcycles) like the 1260 Enduro very approachable and user-friendly. If you plan to spend a ton of money on a motorcycle that costs the same as a Toyota Camry, you’re going to expect it to come with a lot of extra perks.

While the 1260 Enduro comes standard with four pre-programmed ride modes (Sport, Touring, Urban, and Enduro), each one can be modified to your preference. With over 400 customizable settings for throttle response, power output, suspension damping, compression, preload, wheelie control, and traction control, riders can dive deep for a very personalized ride.

Want to wheelie the bike? Limit DWC intervention. Not very smooth at braking and need more ABS intervention? Dial up the DTC system. The options are vast.

With the 1260 Enduro, you have the ability to set the bike up more or less based on your abilities. And all these settings are also adjustable via your smartphone in conjunction with the Ducati My Link app and the Ducati Multimedia System.

Pain Points on the Multistrada 1260 Enduro

Walking up the Multistrada 1260 Enduro one will notice the front turn signals are integrated into the plastic hand guards. From a design element, it allows the front of the bike to maintain very clean lines and it does look great. But they're also flimsy, and anyone who has ever ridden a dirt bike knows that falling now and again is just part of the game. Sadly, we cannot all be badass off-road legends like Beppe Gualini, 65-time participant of the Africa Rally Raid and Ducati’s DRE Technical Director. One drop, and the stock handguards are toast.

My first thought when I saw them was these are stupid, and they're going to break when someone goes down. Lo and behold, I was that guy, on tipping over during a low-speed tight turn on very loose gravel. My front tire tucked and the bike landed on the left grip, cracking off the whole guard including the mounting point for the hydraulic clutch master reservoir. Destroying that would obviously be very not-ideal out in the middle of nowhere.

All this is admittedly an incomplete measure of a bike like the 2019 Multistrada 1260 Enduro, whose real test comes in its durability and reliability in actual adventure scenarios. Off-Road riding is grueling and unforgiving compared to long stints on smooth highway. But after six hours in the saddle in two very different environments, it’s hard to pinpoint any major faults in the 1260 Enduro.

Ducati did a great job at taking an honest look at the 1200 Enduro launch in 2016 and going back to the drawing board to create a better motorcycle. It shows a careful awareness that might stand out to new riders, or even just those who are new to the adventure bike space.

The Italians might not have the longevity and pedigree of outfits like KTM and BMW in the adventure segment, but they're certainly no strangers to creating beautiful performance machines, and it's obvious that Ducati is serious about expanding their market share. In true Italian fashion, they continue to chip away at the block of Multistrada marble in front of them to gradually reveal a masterpiece within.

The 2019 Multistrada 1260 Enduro will be available in the United States in February of next year with a starting price of $21,995. It will only be available in the color Desert Sand. An extensive list of accessories and travel packages can be added at an additional cost.

Editor's Note: Sam Bendall is The Drive’s motorcycle-obsessed contributing writer. He rides, tests, and lives a life on two wheels. His goal is a simple one: expose everyone to the wonderful world of motorcycles and get them out there riding. Sam is based out of Los Angeles, California and his editorial judgments and opinions are his own.

2019 Ducati Multistrada 1260 Enduro: More of Everything for the Modern Adventure Bike