Time to see if Stanley took a page out of Craftsman's book. 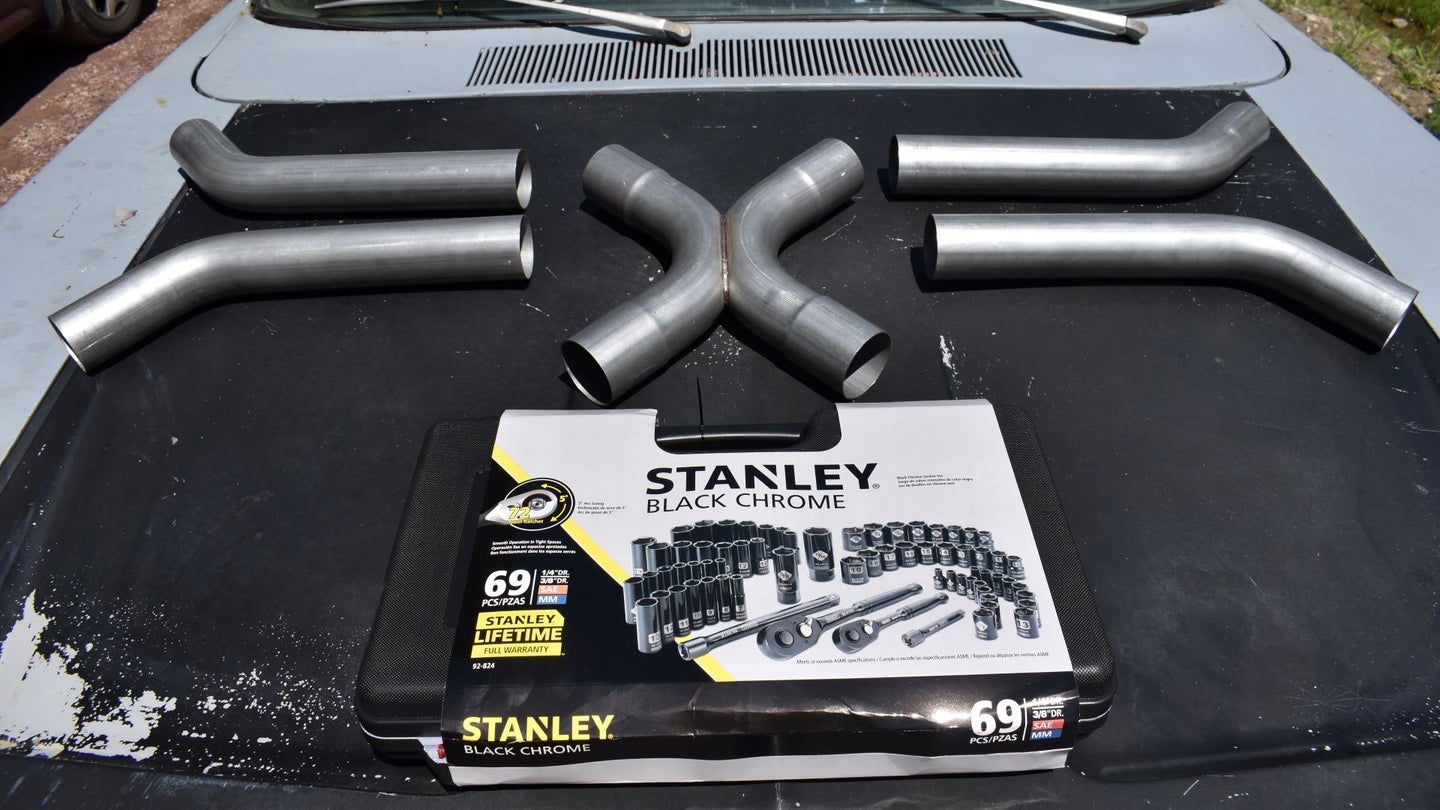 What's worse, a crappy ratchet or bunk sockets? I'd personally rather deal with a funky ratchet since that hassle is usually more manageable than sockets that won’t grab or that warp immediately. Of course, you likely wouldn’t have to deal with either if you buy the right tools. That’s often easier said than done, especially when the brand names trusted by the DIY crowd constantly shake things up in terms of manufacturing and ownership.

It's not exactly a well-kept secret that many of the leading names in this category aren't what they used to be. Constant changes to the recipes to cut down production costs often equates to flimsy tools that don't perform or last as long as they should. Rather than simply heading down to the tool supply and going with Ole Reliable, you're subject to trying to find which is worth its salt.

Now, I get that learning to make do with the tools you've got is a part of life. Unfortunately, that means you're going to have to deal with headaches. Which headaches are you willing to put up with?

In light of the nameplate and manufacturing switcheroo ever-present in the tool world, we put the Stanley 69-Piece Socket Mechanics Tool Set to work. Coming from a brand loved by many weekend warriors, there's no denying that this set is in many home garages. It's seemingly priced just right, packs all the bells and whistles you'd expect, and Stanley is a name your grandparents might have put to work.

Does it measure up to its reputation while incorporating Craftsman into the fold? Well, The Drive put this set through its paces, found the weak points, and we’re here to help you decide whether it's a devil you should dance with.

Opening the Stanley socket set was something of an emotional roller coaster. I want you to experience what I felt, so let's start from the beginning.

I can't remember the last time I used Stanley tools, and I was pretty excited to give this set a go. The packaging wasn’t anything special, but reading the details on the 72-tooth ratcheting mechanism and getting a peek at that black-chrome finish added to the suspense. Knowing these beauty queens were supposedly built to perform, I couldn’t wait to get my tattered mitts on them. Even the textured surface of the hard-plastic storage case surprised me. It’s not much different than what others are bringing to the table, but it is slightly more aesthetically pleasing than the usual junk.

Then, I opened the case. I'm not a superficial guy. A tool is a tool, and it just needs to do the job. Even so, the little bits of cardboard scattered throughout the case didn't exactly leave me feeling confident. I soon realized that the case itself isn't of the best quality. I know. I should have expected this considering it’s yet another cheap blow-molded case, but I guess I let that sleek finish trick me into thinking we’d get a little more out of the packaging.

I can live with minor manufacturing imperfections for the most part, but the fact that one of the sockets doesn't seat properly due to a bulge in the mold is worth mentioning. Upon further inspection, I noticed some of the sockets were upside down, and there was a second ever-wandering 10-mm deep-well quarter-inch drive socket in place of the 12-mm piece.

I expected more from Stanley Black & Decker. I might be able to live with these issues since I'm simply reviewing the set, but anyone else would be more than justified in making a complaint.

Everything included makes for a decent 69-piece starter kit — well, 68 plus a 10-mm spare — even without a half-inch ratchet there’s enough to tackle a decent range of light projects. There are no machining issues to write home about, the ratcheting mechanisms feel tight and smooth, and the laser etching is clear and crisp. I'll even give this set some style points for the John Player Special color scheme.

I still felt skeptical of the Stanley sockets’ performance, considering the packaging issues. What I didn't expect was to be blown away when I actually put these tools to work.

Getting After It With the Stanley Set

It just so happens that I’ve got no shortage of work to do on my project 1969 Dodge Charger. And when the Stanley tool set arrived, I had just received the parts I needed to set up a homemade exhaust system. What an unforeseen (and lucky) coincidence. I soon put the Stanley ratchets and sockets to work.

In a gravel driveway on one of the hottest days of the year, the morning after a ground-soaking rainfall, I set to work. Even sweaty, muddy, and frustrated, there aren’t many negatives to report about these tools. They worked flawlessly.

You might say that exhaust work isn’t the most demanding job for ratchets and sockets, and I’d agree. I would argue, though, that the awkward angles and tight spaces typical of this work can run any tool through its paces.

I also came into this test knowing that some reviewers were less than thrilled with the ratchet’s internal workings, so I wanted to open it up and see what’s inside. I believe it’s important to see what’s inside to better inform my decision-making process. This was also a good opportunity to see if there were any updates to the system that might redeem the Stanley name for those who have written it off. What rests within is a big step up from the plastic guts Stanley once shamelessly supplied to its customers. Still, it’s far from perfect. We’ll come back to that in a moment.

Despite what I expected, I didn't run into any issues that stopped me from working, at least not on account of the tools. (The exhaust pipes needed some massage therapy compliments of Dr. Angle Grinder.) The ratchet had a positive lock on the sockets, they didn't skip any teeth, nor was there a tendency for them to switch directions on me, a common occurrence with cheap ratchets. Even if I had broken something, Stanley’s lifetime warranty would've softened the blow.

Though these aren't the smallest ratchets out there, the 72-tooth mechanism and pear head of the 3/8-inch-drive ratchet were good enough for the task at hand. The collectors on this car are located down by the transmission, meaning there's not a whole lot of space in which to swing the wrench, unless you've got a lift. I don't have a lift, so that five-degree swing arc and high-tooth count really came to the rescue.

The rounded edges and streamline design help to positively boost the experience. I really didn't bust my knuckles much along the way. The sockets' radius corners, which prevent slipping, are the real heroes here.

The last thumbs up I give the set is for the legible etching on each of the sockets. I'm not a big fan of laser etching, but the ability to quickly identify sizes does make a big difference. I was in the glaring sun. Not having to squint to make out chrome scripture in the sun's reflection was a big plus.

We’ll skip right past the cold slap across the cheek of packaging and get right into the important issues. The most notable problems with this set have to do with that black finish we gave style points to. It looks brilliant, but it doesn’t last. A single job had stripped off the finish on the edges of all the pieces I used, and that’s not something to take lightly. What happens when you can’t read the sizing?

Speaking of the black finish, it absorbs heat like no other. If you’re working out in the sun on the hottest day of the year, keep your black tools in the shade. Otherwise, you’re in for a rude surprise when you go to switch sockets, and hello, new “8 mm” tattoo. Learning that the hard way is mostly my own fault.

When it comes to the ratchet, a particular YouTuber in Canada pointed out a problem with the selector-switch mechanism. The pin that drives the single pawl into the drive gear is a thin piece of punched steel that can slide up past the pawl and jam the system. I took a look inside to see if anything’s changed. Well, it hasn’t. Spoiler alert: This same construction configuration is commonplace for all ratchets under the Stanley Black & Decker umbrella.

While I didn’t personally have any issues with this system for my work, I can’t say I feel warm and fuzzy about that configuration. Especially considering other fine-tooth, single-pawl mechanisms use a beefier pin that isn’t likely to experience the same issue.

Our Verdict On Stanley’s Black-Chrome Ratchets and Sockets

My particular set was mildly jacked up upon arrival, the black finish is weak and gets hot in direct sun, and the internals are questionable. Even so, I had a decent working experience with these tools, and I ultimately got the job done without breaking anything or running into any roadblocks.

Overall, this set isn’t terrible, but it’s not something I’d recommend without giving a heads up about its weak points.

If you’re a casual hobbyist that does projects on the weekends, you’ll be alright with this Stanley socket set. I think the internals are strong enough for light work — surely for rusty exhaust components — and the lifetime warranty provides peace of mind. However, someone who works on their car every night of the week or does side jobs for friends would be better off with a set that’s better equipped to take a beating. 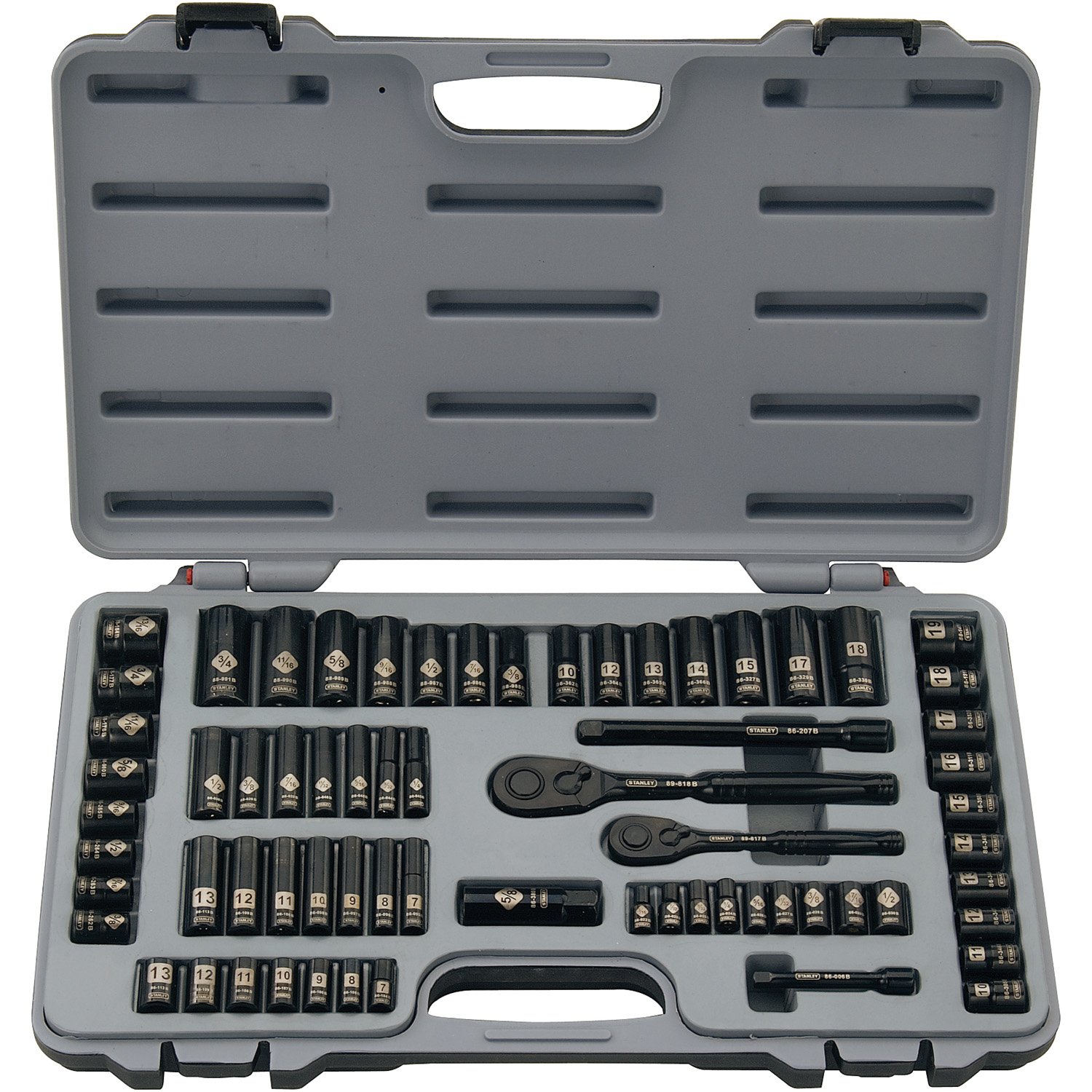 Overall, this set isn’t terrible, but it’s not something I’d recommend without giving a heads up about its weak points.

Q. Are Stanley tools made in the United States?

A. As with many of the great U.S. tool manufacturers, much of Stanley’s manufacturing is now done overseas. This particular set is made in Taiwan. It appears that the quality is much better than some of the ratchets Stanley has pumped out in the past, but it still doesn’t contend with ratchets and sockets that are made in the U.S. or other countries known to produce quality hand tools.

Q. Are Stanley tools the same as Craftsman tools?

A. You’d be right to assume that there are a lot of similarities between the two since Stanley Black & Decker acquired the Craftsman line. The internals of the ratchets in this set are seemingly identical to what’s found in the new Craftsman tools. Even if there are some distinctions between the brands, I’d say it’s safe to assume that ratchet internal workings aren’t all they share with one another.

A. Overall, Stanley is a pretty solid brand that folks have relied on for years. They’ve always come to the rescue of the DIY crowd and can be found on virtually any residential construction site. As for automotive work, I think you’re smart to consider someone that puts beefier internals to work.

The Drive's Gear section is our brand-new baby, and we want it to grow. To give you, our dear readers, clarity on the process, we want you to know that the products we get in arrive from a variety of sources, including those we purchase ourselves and those we receive from manufacturers. No matter the source, we maintain our editorial independence and will always give you our honest assessment of any product we test.