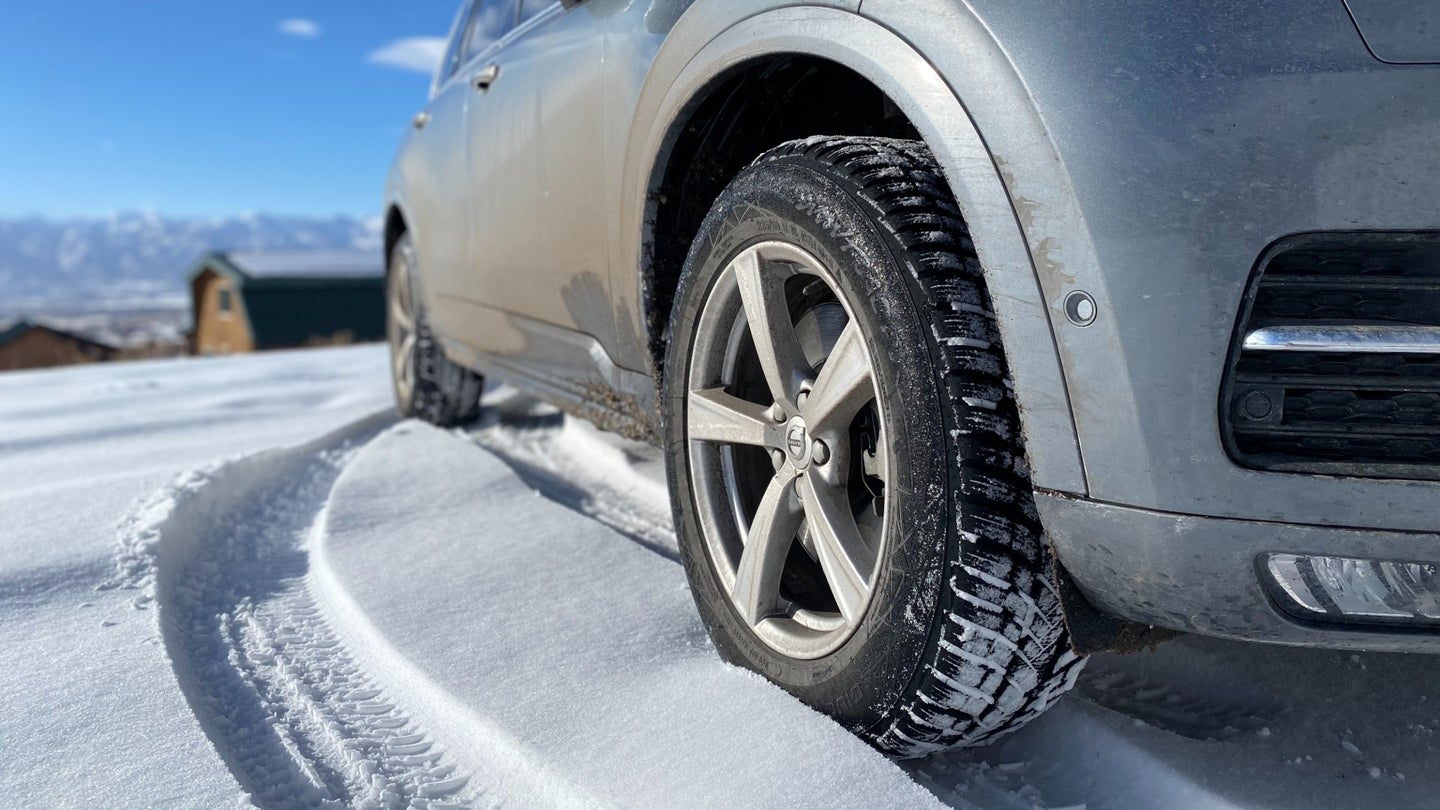 Here at The Drive, we go by the creed, “If you deal with winter on the regular, you should get winter tires.” It’s not exactly super catchy, but given that all-season tires aren’t the same as winter tires, it’s a vital statement. That’s especially true for people like me who now live on a literal mountain in Utah where the roads are gravel and snow is ever-present.

After my family was exiled from our Los Angeles homestead and an interim port of call in Chicago, Utah’s Uinta Mountains delivered us a new home. But getting there, in the dead of winter I might add, required a coordinated plan of attack, especially given our new home’s less-than-ideal gravel roads. It added up to the perfect test for a set of winter tires, and Vredestein, a little-known Netherlands-based tire manufacturer—which has actually been around for over 111 years—offered up a set of its Wintrac Pros that are rated for snow and well-below zero-degrees.

How could I say no? Time to see if little-known equals lacking performance or a well-kept secret.

Our Initial Reaction of the Vredestein Wintrac Pro Tires

Ahead of the tire swap, our family’s 2016 Volvo XC90 T5 AWD had a set of 235/60R18 Michelin Primacy Tour A/S tires. They were good, but not great. There was some drone, but they held the road very well, especially on the loopty-loop and somewhat greasy roads of Southern California. In Chicago, with light snow and some ice, they slipped enough to elicit more awareness.

Shod with the Vredesteins, thanks to a quick $145 Discount Tire installation, I was quite pleased.

Getting After It With the Vredestein Wintrac Pro Tires

Given the span of this test, I’m going to break this down into three sections: Chicagoland, The Road Trip, and Mountain Living.

We didn’t spend too much time in Chicago once the tires were on, but in the three weeks before our move, it snowed, sleeted, iced over, and was generally Chicago in winter, e.g. it sucked. The roads were well-plowed, but given the fact that it gets frigid so quickly due to the lake-effect wind and winter storms, they were slippery. The Wintrac Pros hardly ever faltered.

When they did, it was driver error or driver-instigated, asI wanted to see where their breaking point was in a handful of frozen roundabouts. For the average consumer, that point was well-beyond normal driving conditions. Color me impressed.

Chicago to Timber Lakes, Utah is exactly 1,398 miles door-to-door. The route goes through five states, including my arch-nemesis Nebraska—shakes fist—and undulates from below sea level in Iowa to 7,000 feet above sea level where our new home currently sits.

The route is also littered with well-maintained highways, car-sized potholes, 80-mph speed limits, and stretches that go on forever in Wyoming. The Volvo was also stuffed to the brim with my sturdy fame, my wife, our three toddlers, and the entirety of the cargo space full of kid necessities. It was...well-laden. Luckily, we didn’t encounter any freak snowstorms. No blizzards. No freezing rain—we had encountered that in the past on more than one occasion.

Additionally, if you’re considering a winter cross-country Cannonball, Vredestein says the Wintrac Pro is a “dedicated winter UHP tire, developed for drivers who do not want to compromise on performance and handling, even in the harshest, coldest, and snowiest winter climates” and, as such, is good up to 186 mph. Not that I ever got anywhere close to that. Nope, not me.

[Ed. note: please do not Cannonball. It’s dangerous and illegal and dumb.]

Like my Chicagoland assessment, the Wintrac Pros didn’t have a single issue. Loaded up, the ride was cushy. In fact, it was way better than what we experienced with the Michelins. It softened up the Volvo so much that the kids slept through a solid portion of the trip without ever waking from errant bump-stop potholes.

Coming into our new home state, and entering our new neighborhood, we understood that winter tires were an absolute necessity.

The Uinta-Wasatch mountains are quite impressive. My wife said they remind her of the Paramount logo and she’s not wrong. The day we moved in, two feet of powder had fallen and the “roads” had not been plowed at all. Although the first half-mile into our neighborhood is paved, the last mile of road going up to our new home is hard-packed gravel with zero runoff on certain hairpin turns.

Add that the base of the neighborhood starts at 5,000 feet above sea level and our home is at just below 7,000 feet above sea level, there are some steep climbs. So steep that our HOA didn’t allow our moving truck to even attempt getting to our home. What that meant was that the Volvo—which I’m pretty sure is Swedish for truck—was used to make multiple hauls from the base of the mountain to our home with all our stuff in the back or strapped to the roof.

It also started snowing even more with the roads getting progressively worse. My father-in-law, who was attempting to help and whose car only had all-seasons, made exactly one trip and that was to our house. He didn’t dare tempt fate with going up and down and up and down. The Volvo made 15 trips that day. There was never a doubt I’d make it up and down thanks to the Wintrac Pros.

At the time of writing, it’s been three weeks since we moved in. It’s snowed another 20-plus inches in that span. We’ve seen whiteouts, blizzards, and a handful of other deliveries unable to be delivered to our house, meaning more trips up and down. The tires still haven’t failed me.

Aside from their stellar winter performance detailed above, the best part of the Wintrac Pro tires, at least for me, is how smooth they made the Volvo. I made the decision to purchase an XC90 with smaller diameter rims because I wanted better ride quality. I don’t want painted-on tires that look good but kill my spine and awaken my children. The Michelins, however, just never provided that desire. The Wintrac Pros did.

On the road, they smoothed out everything we encountered and made the trip to Utah a breeze. And in the challenging conditions that our new neighborhood provides, with its gravel undulations and potholes, not much is translated into the cabin and into my coccyx.

That said, there’s no beating them in the snow, ice, and sleet. I’ve seen countless lifted pickups with off-road tires or mudding tires in our new neighborhood and I can’t help but giggle when I pass them just pootling along in my Swedish dad-mobile.

What’s Not To Like About the Vredestein Wintrac Pro Tires

Honestly, after traveling from Chicago’s northwest suburbs to the rocky and wintery climes of the Uinta-Wasatch mountain range of Utah, not much. As stated, high-speed stability is solid, drone is nonexistent, and it hasn’t slipped on hard-pack ice over our neighborhood’s undulating gravel roads.

Given a few more months with it, I might say longevity, but right now, it’s not showing an ounce of degradation.

Our Verdict On the Vredestein Wintrac Pro Tires

I’ll be honest, I was a bit of a snob about tires before this test. Vredestein isn’t exactly a household name like Michelin, Toyo, or Pirelli. Nor is it the first name when you think of winter tires—hello, Blizzak and Sumitomo. But the Wintrac Pros are some of the most capable winter tires I’ve ever tested.

Hand on heart, they feel like the gravel rally tires I drove on at Dirt Fish. There are endless amounts of dig and traction, even on the slipperiest of surfaces, i.e. the roads to my home where one missed braking point or tire slip on a turn will result in a less-than-stellar situation of entering one of our neighbor’s living rooms.

If you’re in the market for winter tires, the Vredestein Wintrac Pros should absolutely be on your list. 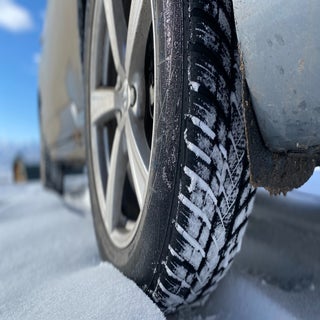 If you’re in the market for winter tires, the Vredestein Wintrac Pros should absolutely be on your list.

Q. Can You Drive on Winter Tires All Year Long?

A. You can, but that’s not their intended use. Nor will they have traction in deep snow and ice. Winter tires are designed for increased traction in cold conditions. Warm springs and hot summers are going to degrade them fast.

Q. What Month Should I Install My Winter Tires?

A. Well, see, that’s going to depend on where you live. Midwest states, you’ll probably want to install them around October or November. Near the Rockies? September to October. Alaska, get a dog sled.

A. No, they aren’t. Here’s The Drive’s explainer on All-Season vs. Winter Tires. Read it.

The Drive's Gear section is our brand new baby we want to grow. To give you, our dear readers, clarity on the process, the products we get in arrive from a variety of sources, including purchased ourselves or through manufacturers. No matter the source, we maintain our editorial independence and will always give you our honest assessment of any product we test. We cannot be bought. Unless you wave $1 billion in our faces. Maybe then we'll consider it.

And have products you want to be tested? Send your ideas our way!

We’re here to be expert guides in everything How-To and Product related. Use us, compliment us, yell at us. Comment below and let’s talk, y’all! You can also shout at us on Twitter or Instagram!