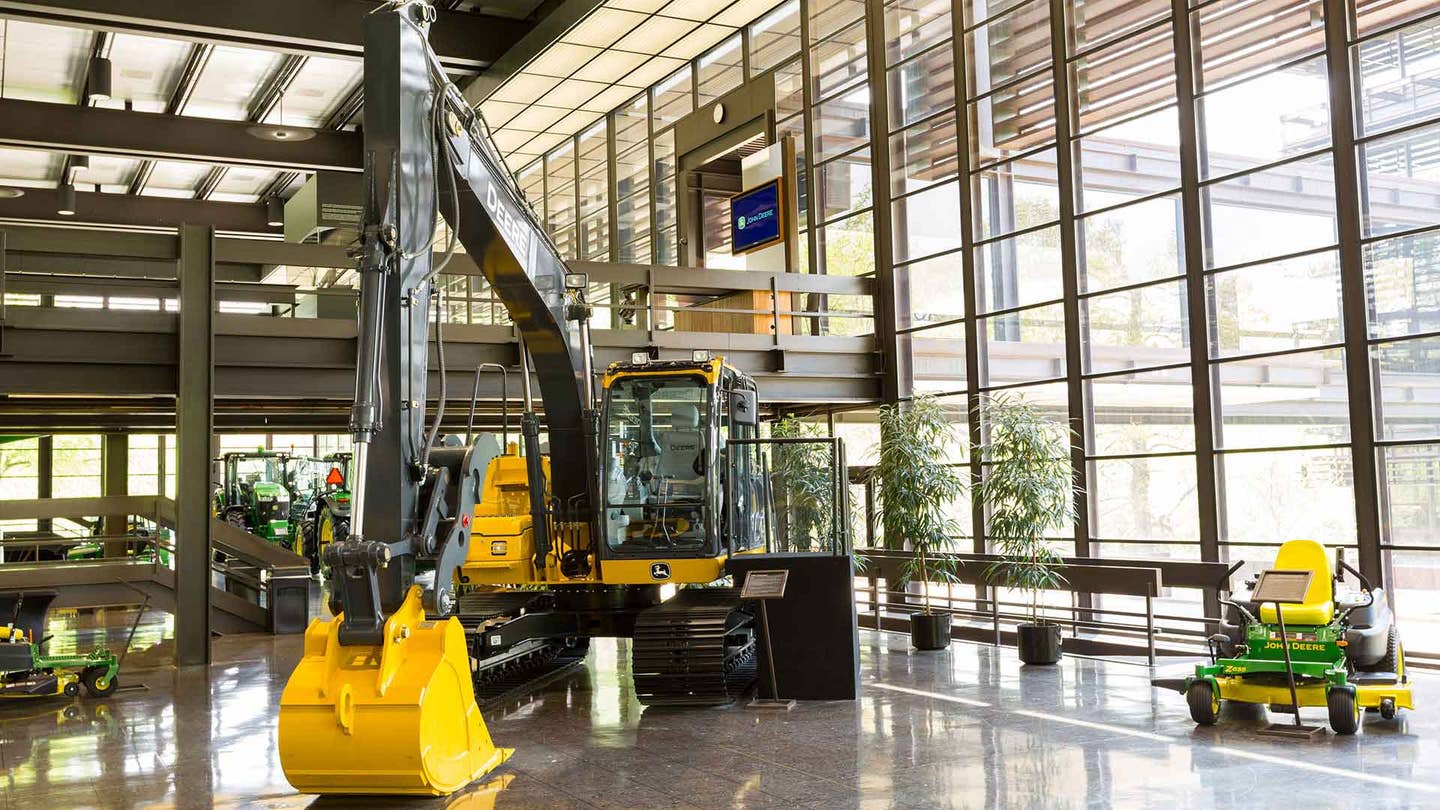 To get to John Deere’s mid-century modern headquarters in Moline, IL, your best move is to land at O’Hare Airport, grab a rental car, turn left and drive into the corn for about three hours.

The building is set in a valley. If you’re lucky enough to be accompanied by facilities manager Craig Mack, who has maintained the landmark structure for over 35 years, you walk through a long, elevated, glass-lined sky-bridge, clear security and enter the corporate offices on the fourth floor.

The 1,400-acre complex was designed by Eero Saarinen (with an addition by his former associate Kevin Roche), architect of the St. Louis Arch and the former TWA terminal at New York’s JFK Airport. The Deere headquarters’ innovative, light-filled space houses a subset of the 8,000 workers that the company employs in the region, a small share of the 67,000 engaged worldwide. Deere is such a gracious employer, Mack tells us, that there’s a homespun nickname for the many local couples in which both members work for the corporation. “We call it ‘Double Deere.’”

But before we explore the hallways lined with Miros, Chagalls, Grant Woods and works from other artists from every single country in which Deere does business. Before we look down from the top floor offices at the handsome Henry Moore sculpture in the reflecting pool—the water from which, Clark tells us, is aerated and circulated as coolant in the sophisticated air conditioning system. Before we marvel at the book-matched marble walls, recessed lighting and original Charles and Ray Eames furniture in the executive dining room. Before we even hear about the complex’s 350-seat auditorium, in which, back when the building opened in 1964, an ashtray was integrated into every chair. Before any of this, we get to pass through the Display Floor.

A temple to the company’s 177-year history, the Display Floor is located in a double-height, glass-walled structure spread out over 50,000 square feet, and open to the public seven days a week. It is one of the region’s top tourist attractions, and it is easy to see why. It’s a vehicular playground, a farmer’s fantasy, a titanic Tonka toy box.

Here, we stood inside the nearly six-foot bucket of a giant John Deere bulldozer. We clambered up a two-story ladder to sit in the driver’s seat of a contemporary GPS-guided John Deere combine. We eyed the smallest and largest lawn mowers we could find, imagining our life as a suburban dad, farmer or golf course maintenance team chief. We wondered, given the rise of legalization, if the company had anything in development for the incipient marijuana harvest boom, but the Midwest is far too polite a place to broach such subjects.

Instead, we studied the extensive glass-enclosed mural that spans the Display Floor’s rear wall. The 50-year-old display, titled “Reflections of an Era,” was created by the famed textile, furniture and interior designer Alexander “Sandro” Girard, who worked with greats like George Nelson, Charles and Ray Eames, Georg Jensen and Emilio Pucci. It tells the Deere story through drawings, models, ads and other artifacts.

Perusing this timeline, we discovered that John Deere was a real person, not just a leaping cervid silhouette (the bounding stag icon has been in use since the 1870s). Deere got his start as a blacksmith in Vermont in the 1820s, but moved west to Illinois for economic opportunity the following decade. He opened a shop to make and repair tools, and soon after had his great innovation, the one that gave him his start in farm equipment, the industry the company still dominates. In 1837, he created a polished steel plow blade that was smoother, lighter and less prone to rust and drag in the heavy Midwestern soil than the heavy cast iron ones predominant in the sandier Northeast.

This tidbit of metallurgical information suddenly informs our understanding of the Saarinen-designed headquarters. Though we immediately notice the building’s broad use of glass, delicate Japanesque framing and horizontal integration into the hilly landscape, we are at a bit of a loss identifying the rich, organic, umbric material that dominates the exterior. It looks almost like planed mahogany. “It’s COR-TEN,” Mack tells us, a proprietary weathering steel that develops a dense, rusty patina when exposed to the elements, protecting the metal for life. “It’s maintenance-free,” Mack explains. “It requires no paints or solvents, creating far less environmental impact over its lifetime.”

It also has another beneficial side effect. “There’s something in the metal that reacts with pigeon’s feet, burning them,” Mack says. So they don’t roost or leave droppings on the building’s myriad ledges.

This intrinsic and protective patination explains why Saarinen didn’t paint the building John Deere Green and John Deere Yellow, colors so firmly associated with the brand’s agricultural vehicles that they are legally trademarked. But it doesn’t explain where these colors came from in the first place. Strangely enough, neither does anything else in the site’s historical displays or timeline.

Before we leave HQ, we ask Mack for the pigments’ origin story. “No one’s ever asked us that before,” he tells us, mysteriously—almost unbelievably. Promising to get in touch with the archivist, he sends us on our way.

The response doesn’t come in until well after our arrival back in New York. “While many people have guessed about various reasons this color combination might have been used,” the archivist writes, anonymously, in a forwarded message, “Deere cannot be definitive to the motivation on why it was chosen when it was first decided to settle on these two colors.”

We think back to our return drive to O’Hare, surrounded on all sides, and to the infinite plane of the plains horizon, by late summer farm fields. Towering as high as an elephant’s eye is the Midwest’s dominant plant, product and color scheme. Husks and ears, green and yellow. Corn.