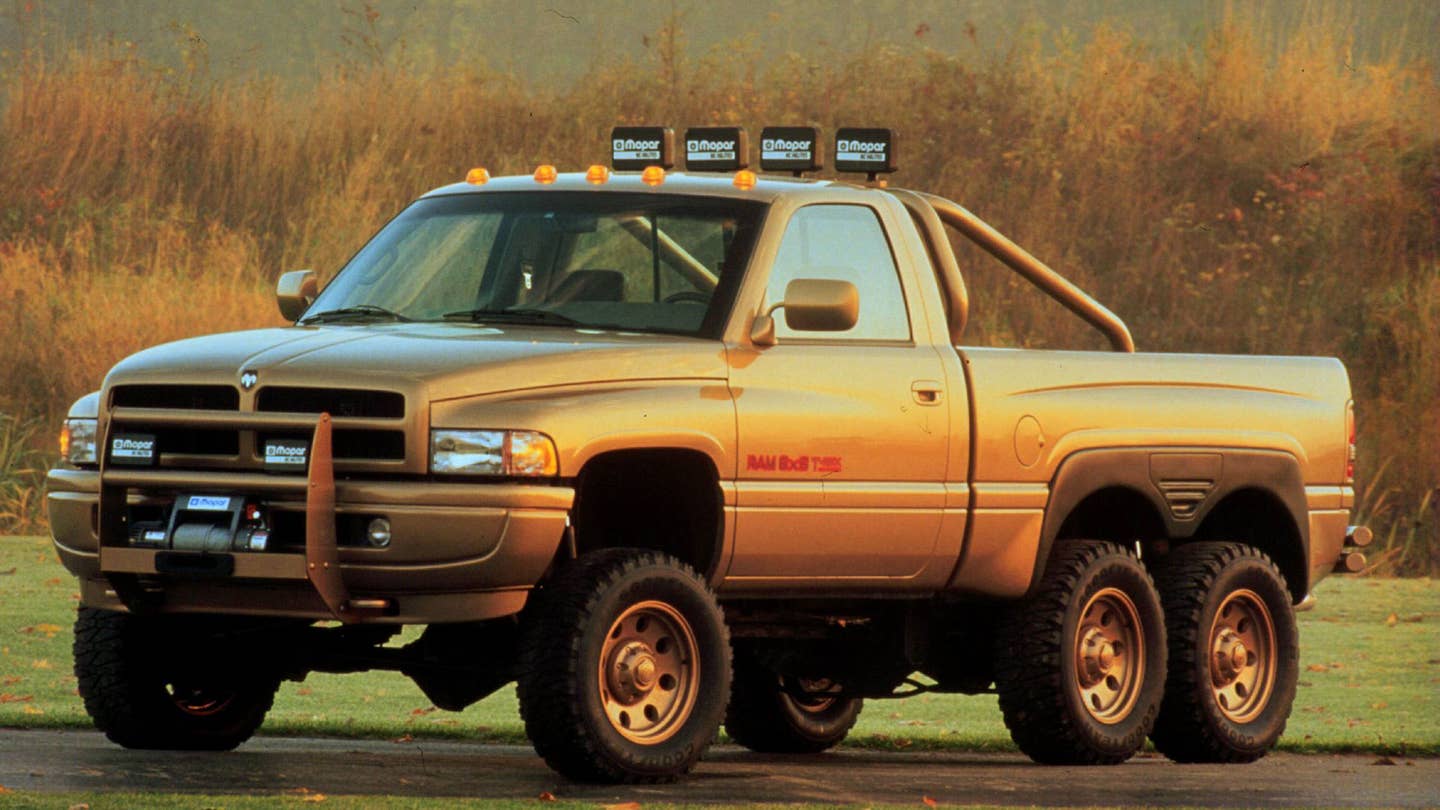 We’re fans of any wheel configuration. Two and four are lovely, though three-wheeled glory holds a special place in our hearts. Five wheels never caught on, though we can appreciate this valiant effort from the Fifties. Six wheels, however, sets us aflutter. While it’s always better when that extra set of tires is connected to the drivetrain—here’s looking at you, Mercedes-Benz AMG 6x6—we’re happy to behold anything with a half-dozen rollers. Below, some (more) of our favorites.

This convertible behemoth came in 1977 from Panther, a then-floundering and now-defunct British manufacturer. The powerplant is a mid-mounted 500cid Cadillac V8 with twin turbochargers. Allegedly, the Panther 6 could crack 200 mph, though that remains unproven. It featured a hard and soft top, an automatic fire extinguisher (Well, that’s telling.—Ed.), electrically operated seats and windows, plus a television and telephone. The inclusion of bonus wheels was inspired by the Tyrrell P34 Formula 1 car. While that design (at least theoretically) made sense racing, those four 13-inch wheels up front here don’t serve a functional purpose. Two iterations of the Six were produced—one white, one black—both of which are still kicking.

This elongated Dodge Ram concept, created in 1997, wasn’t called T-Rex after the dino, though like the hulking predator, it died out. The moniker breaks down as Technology Research Experimental vehicle, and that’s precisely what the T-Rex was. It was six-wheel drive, powered by an 8.0-liter Magnum V-10 engine lifted from a Ram 2500. That stock engine came in around 300 ponies and about 450 lb-ft of torque, though when Dodge engineers got finished with the T-Rex, the powerplant generated 400 horses and about 550 lb-ft of torque. The suspension, with adjustable ride height, features three live axles that are heavy-duty light-truck parts off Chrysler’s shelf. Interestingly, this may have been a precursor for Mercedes-Benz’s 6X6, considering that M-B bought Chrysler right after the T-Rex was born.

This lengthened Citroën was the brainchild of a British man named Phil Collins, no relation to the Genesis singer/drummer. Why did he do this to a perfectly large and in charge CX? “It wasn’t big enough,” Collins said. He had it specially made in Germany, where he says six-wheeled conversions were the norm back in the 1980s. According to Collins, the impetus for the modifications was to transport newspapers at high speed around the country during the middle of the night. He claims drivers would carry one ton of Financial Times at absurd speeds and then fall asleep and crash. Collins uses his custom Landrunner not to sling news but to—get ready for this—tow a Piper Comanche fuselage that’s had its wings clipped and been converted into a micro-camper. See all of this in action for yourself.

This is another Tyrrell P34 spinoff, but March Engineering, a UK race car builder, reversed the secret of Tyrrell’s success by shifting the extra axle to the rear. Unlike the P34, which came in 1-2 in the 1976 Swedish Grand Prix and 3-4 in the overall championship, the March 2-4-0 never campaigned. Head designer Robin Herd kept a keen eye on Tyrrell, though he believed that the smaller front tires of the P34—10 inches in diameter to improve aerodynamics and quad in number to increase grip—were hindered by the 24-in. rear tires, which would account for 30 to 40 percent of the car’s drag. Herd thought grip would be more impactful if it came from the driven wheels. Thus, he placed four driven wheels at the rear, each 16 inches in diameter. He posited that if all tires were equal in size, you’d have cleaner air passing over the wing, lending to improved aero and better traction. Sound on paper, perhaps, but in practice the car had too many issues and eventually was abandoned.

The Germans built only 57 of these back in 1934. Eleven were sent to the Wehrmacht (Nazi armed forces) and three ended up in Adolf Hitler’s personal fleet, scattered around his various homesteads. An inline 8-cylinder engine displacing 5.4 liters sent 98 horsepower to all four rear wheels or, optionally, to all six. The G4s maxed out at 42 mph on their rugged all-terrain tires. This was helpful for the Führer when he was bouncing over pockmarked streets of the cities he’d just bombed. He maintained a blue convertible G4 for parades, a gray luggage car that could rapidly transform into an ambulance (should a surprise attack occur), and a black radio car to issue directives on the fly. All three Hitlermobiles still exist, last appraised at $3.3 million. Each.

What happens when you put a smart fortwo on the rack and give it a stretch? German coachbuilder Limouzine did just that and introduced the madeforsix at last year’s Frankfurt Motor Show. All in, it’s 216 inches long; that’s 15 inches longer than a Mercedes-Benz S-Class. It’s got black alloys, tinted windows, a roof mounted spoiler (why?) and a registration sticker that kicks off with a bit of fun: The letters “LOLZ.” It’s rear-engined, cranking out 120 horsepower (20 more than the Brabus-tuned fortwo, if you’re counting). The name is accurate. It’ll seat six adults, including the driver. Entrance to the madeforsix party happens via a gullwing door. The best things are always behind a gullwing door, aren’t they?