The 6 Slickest Six-Wheel Cars Ever

The Saab is hexa-cool. The custom cartel El Camino? Debatable. 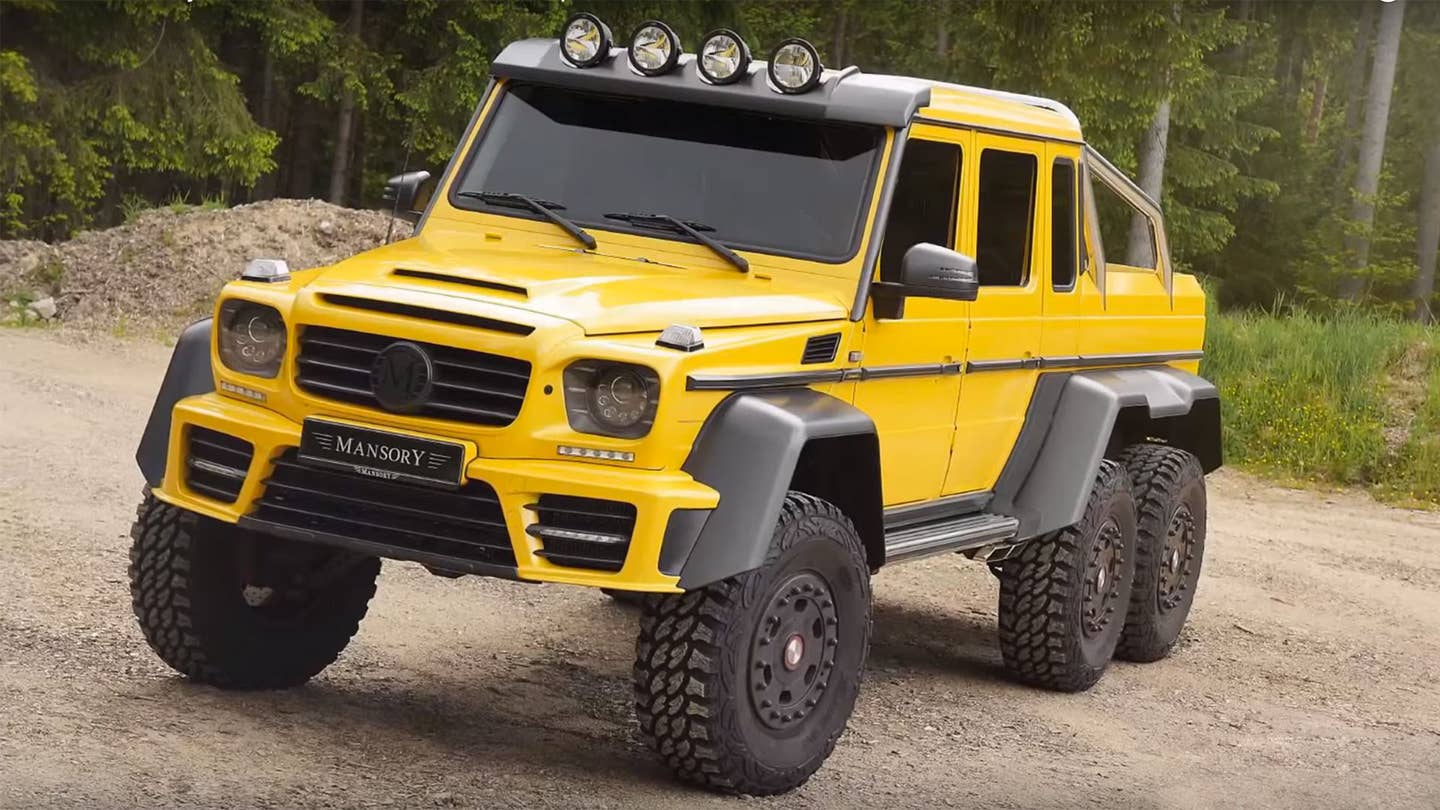 Formula One was rife with insanity in the Seventies, both off and on the track. Teams were game to try anything—no matter how ludicrous—if it meant gaining a competitive edge. Thus, posited designer Derek Gardner, if four wheels were good, six must be better. Elf Tyrrell Racing bought in quickly, and readied the new P34 for the 1976 season. The science made sense on paper: Four smaller, 10-inch wheels at the nose would diminish drag normally associated with two larger tires. The quad set-up also expanded the total contact patch and allowed for greater stopping power, given additional brake discs.

It wasn’t the only six-wheeled F1 car (both McLaren and Ferrari both dabbled with concepts), but the P34 was the only to campaign. When it worked, it snagged 10 podium spots during its debut season. Impressive, until you factor in all the times it failed. Smaller tires spin far faster, meaning they wear out quicker, slashing performance significantly. The faster revolutions also meant harder work for the brakes, which led to frequent overheating. Accordingly, it dropped out of a number of races.

German aftermarket tuners vying to out-ratchet each other has produced a bevy of one-off powerhouses. Bless them for that, because it gave us Brabus B63, a 700-horsepower 6x6 Mercedes G-Class. The fine folks at Mansory found that too mild, so they took created an 829-hp variant. The unsubtle slap to Brabus’ face produces so much torque, it had to be electronically limited to 738 lb-ft. (Merc’s stock six-by comes with 536-horsepower and 560 lb-ft.) While Mansory got deep into rebuilding the AMG engine, they also elevated the exhaust system, drenched the body in carbon fiber accents and added vents to help keep cool that behemoth of an engine.

The Defender is among the most iconic trucks ever crafted. So, if you’re messing with perfection, you better bring something serious to the table. British tuners Kahn have done precisely that with this maniacal Flying Huntsman. But tacking on a third axle and stretching the chassis means additional curb weight. No worries, Kahn shoehorned a GM LS3 V8 (see: Camaro SS engine) between the Rover’s fenders, lending 430hp. That’s coupled to a six-speed auto tranny and aided by an upgraded exhaust system. That drool-worthy paint job is a custom number that Kahn calls Volcanic Rock Satin, which is perfect considering where this thing’ll get you.

This supercar hails from Italy, with design impetus from the Tyrrell P34. The build began 23 years before these six wheels hit asphalt, back in the Eighties, but quickly stalled due to a shortage of low-profile tires. In 2003, the project car was revived and ultimately went into extremely limited production—six to eight cars per year—in 2005. The rear-engined, rear-wheel-drive coupe boasts an Audi V8, fiberglass and carbon fiber shell that sits on a tubular steel frame, a removable roof and, of course, scissor doors. The naturally-aspirated 4.2-liter cranks out 434hp and is capable of 186 mph.

Whenever the Swedish manufacturer linked up with designer Leif Mellberg, the results were impressive. The Saab Gullwing, the Mayo, the 900 Speedster—all innovative for the jet-turned-auto maker. But Mellberg’s largest concept that came to fruition was the 906 Turbo. It’s skeleton is an elongated 1981 900 GLS, which was also widened a bit, making it a proper land-barge. It featured (what was for its time) a marvelously appointed interior, with a built-in police radio, radar detector, video screen, fridge, freezer and heater cabinets. The 906 couldn’t outrun its sad fate, though. It was unceremoniously stripped, scrapped and sent to salvage.

This Frankencar was the spawn of Rolando “Roly” Fernandez, the Miami customizer who later wound up in federal prison for his involvement with the Medellin cartel. The drug connection here is worth noting, because what you’re looking at is a Camaro torso and nose mashed together with an El Camino’s hindquarters. The paint job. The spoiler. It’s unclear if the third axle is under power of the stock V8 but, c’mon, look at those side strakes. The vehicle (contraption?) was last seen on eBay, finished in matte black primer and sitting in a Kentucky driveway, which somehow seems fitting.