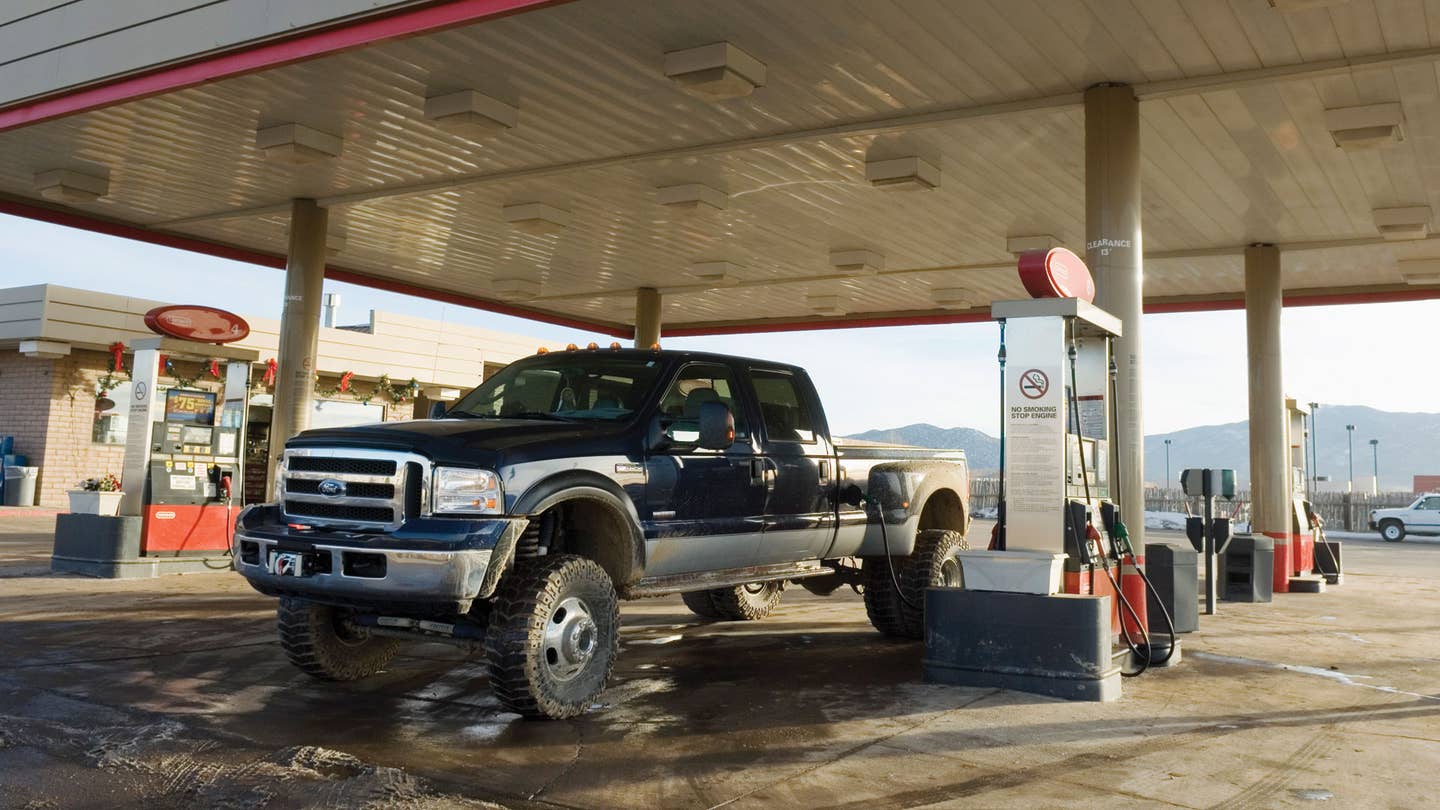 I have a friend. We'll call him Prius Man. Prius Man says he needs a truck for his small farming operation upstate. He needs the truck's bed, its hauling capabilities and the ruggedness inherent in American truck design. But Prius Man is used to Prius fuel economy, and can't understand why he should have to suffer 15-mpg consumption for the sake of added hauling capacity.

Welcome to the real world, Prius Man. As Isaac Newton once said, "For every action, there is an equal and opposite reaction." As in, you need to carry more things, so you get a larger vehicle. The sacrifice for size is consumption.

Prius Man is not alone in his misguided hope that something designed to carry heavy things could be as economical to use as, say, a small vehicle that can fit a few passengers and maybe some groceries. Just ask the nearly 10 million people who bought trucks and SUVs in America last year. Not that they care. Gas prices are low now — so whatever. But when gas prices go up, and they will, we're going to want to adjust our values to suit our needs.

Here's another way to look at Prius Man's struggle: You can carry 50 people in a school bus. You can only carry five in a standard passenger car. The school bus will never get anywhere near the mpg the car gets, so with only a passenger or two aboard it's inefficient. Loaded up with ten times as many passengers though, the big bus is an efficiency dream, despite its thirst.

The bottom line is that the larger the vehicle, the more it will weigh. The heavier it is, the more fuel will be required to move it. (Its greater weight will also make it safer in a crash, but that's another issue altogether.) But everyone wants to get the best fuel economy possible, provided the fuel they're using powers a machine that meets their needs. Seriously, even if you're a racecar driver, you still want your vehicle to be as efficient as possible.

So here are a few basic questions you should to ask yourself when you're choosing a vehicle:

1. How many people will you typically carry? Be realistic. There's a difference between the single guy who can occasionally stuff a couple of unhappy friends into the backseat of his Mustang on the way home from a bar and someone who actually has to carry more than one passenger on a regular basis. Don't be the jerk who disregards the spatial needs of the people you're responsible for carrying.

2. What kind of stuff will you be carrying? Again, be honest. Are you really going to cram kayaks, mountain bikes, construction equipment and furniture inside your car, all while towing a boat? Or is that only going to happen once a year? If you're like Prius Man, and will be hauling dirt, seeds, equipment and other messy, heavy things around, maybe a pickup is a good option. But if you're a wishful outdoor enthusiast/builder/boat owner, maybe a Honda Fit is all you need.

3. Where are you going to park it? Are you really going to try to stuff your 19-foot-long pickup into an urban parallel parking spot? Think of all the tickets you'll get when you crowd the hydrant just a little too much. Or maybe you have a garage that isn't long enough to fit a truck. You'll only look macho in the truck until it's time to park, which is when you'll look like a real knob. Then again, if you have plenty of space for parking, it's not an issue!

4. Do you really need ground clearance and four-wheel drive? Where are you going to drive? I've owned four-wheel drive vehicles several times over the past few years, and can count on one hand the number of times I've actually used the capability. Maybe you're the type who actually does go offroading or needs the wet weather performance advantage offered by all-wheel drive. But most of us can drive through almost any sort of weather in a boring old front-wheel drive car. Also, please consider that having four-wheel drive doesn't mean you won't get stuck, it just means you're likely to get stuck much worse.

5. How much money do you want to spend on fuel every year? To help you give this some serious thought, I've created a comparison. Let's say that you, like Prius Man, have the budget to purchase a 14-year-old used car, and want a pickup for its work capability. If you get a four-wheel drive '02 F-150 equipped with a V8 engine and automatic transmission, for example, the U.S. EPA estimates your annual fuel bill will be $5,250. Spring for the V6, manual transmission model of the same, your fuel cost drops 14 percent, to $4,500. But if Prius Man really only needs a station wagon, and can get by with an '02 Hyundai Santa Fe. EPA puts the annual fuel cost at $2,500 — less than half that of the V8 pickup. The simple truth of the thing is that most of us could be just fine driving the modern-day Model T — a 4-cylinder Toyota Corolla. Now we're talking $1,250 per year. That's how much difference size and weight make.

Take all these things into consideration, they matter, but if you want to go nuts and get something crazy cool we'll be the last to try and stop you. Just keep in mind how often you're going to use advertised features and capabilities before you go out and spend money on them. Miscalculating this complex and highly personalized formula is the equivalent of carrying half a year's worth of clothing on your back when you're only going to be traveling for a few days. You don't want that. Most of the time, less is more.