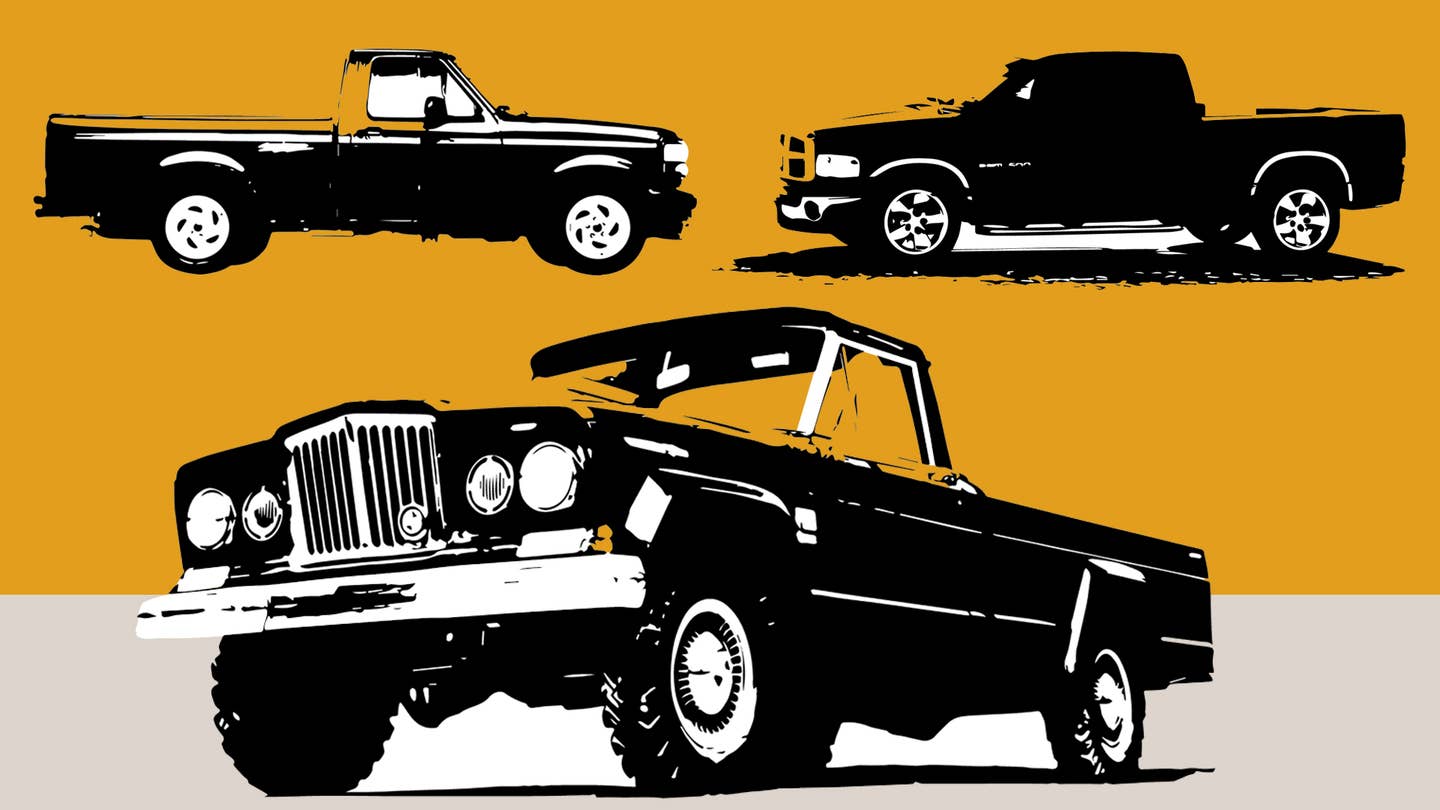 Pickup trucks were never supposed to become classics. They were produced to work; to expend their substance in getting plumbers to jobs, ranchers to their livestock, and loads of often-unpleasant stuff from one place to another. After all, what’s the point of a truck that can’t take abuse? What’s the point of a tool that doesn’t put function before form?

But this is 21st century America, where mechanical things are increasingly rare. So simple, straightforward old pickups have become objects of veneration. Nostalgia has much to with this, but it’s also that pickups still represent something about ourselves as Americans. You know, hardworking, independent, and stalwart.

The old truck market isn’t as obsessed with “collectability” as the markets for muscle cars or Italian exotics. Virtually no trucks have glorious racing heritages. There were few clever marketing schemes for trucks aimed at the burgeoning youth market. Sure there have been performance oriented pickups like the Ford F-150 Lightning and Dodge’s Viper V-10 powered Ram SRT-10, but they’re the anomalies.

What makes a classic truck? Who knows? But at least for now the subject is light-duty pickup trucks built after World War II. So forget about SUVs for the time being. Medium and heavy-duty trucks are beyond this guide’s scope. And anything built before 1941 may as well be a stone ax.

There is no shortage of truck web sites out there. Magazines? There used to be hundreds and now there are dozens. No matter how obscure your question, someone has likely already answered it on an online forum. As with most things in this digital world, start with Google and keep digging. Duh.

Because there are so many trucks out there, don’t get wrapped up in the often astounding prices paid at auction. At Barrett-Jackson’s Scottsdale auction in 2015 someone paid $44,000 for a restored 1970 C10 that looks pretty dang nice. Then on practically the same day at the same auction a virtually identical 1969 version of that truck sold for $51,000. Meanwhile on Craigslist here’s another 1970 C10 painted red-and-white like the others for only $8,000 – in Sahuarita only about two hours from Scottsdale. That last truck is a less desirable long wheelbase version, but can there really be more than $40,000 worth of difference between them?

Dig into every corner of America and there are trucks waiting to be unearthed, uncovered and rediscovered. And be bold about exploring estate sales, government auctions and trucks that look like they’ve been parked in someone’s driveway for decades.

Trucks are ordinary things. They should be priced that way.

1. 1993 to 1995 Ford F-150 SVT Lightning – Back in the early 1990s Ford had let the F-150 go somewhat stale. The updates that had been applied to it over the years couldn’t disguise the fact that it was basically the same truck introduced for the 1980 model year. So Ford unleashed its Special Vehicle Team (SVT) to rip out a performance version that included a high-output 5.8-liter (351 cubic inch) V8 with “GT40” style heads, a special intake and tube headers. Today the resulting 240-horsepower seems modest, but back then it was impressive. Throw in special trim, a tuned suspension and 17-inch wheels and tires and it’s still an attractive truck. Only 11,563 were made over three model years, and that is very low production for a truck.

2. 1973 to 1987 General Motors Trucks – Chevrolet and GMC produced a vast ocean of these over the truck’s 15-year production run. But despite their ubiquity, they’re gaining in popularity with hot rodders if not collectors. They’re easy to modify, cheap to fix and comfortable when finished. Companies like Squarebody Specialists now offer complete trucks and truck tent built to your specification. What the Squarebody Syndicate actually does is a mystery, but here’s their web site.

3. 1993 to 2002 Dodge Ram – Designed to resemble a scaled down semi, this truck made Dodge relevant in the pickup truck segment again. Today they’re cheap, easy to find, and fun to play with. Not quite a classic now, these trucks are destined to be soon recognized for the achievement they represent. Look for the Cummins turbo diesel ¾- and one-ton versions to hold their value best and maybe even appreciate a bit.

4. 1957 to 1960 Ford F-Series – Written off as awkward looking, particularly when compared with the utterly gorgeous ’56 model it replaced, these flat-nosed beasts are finally being recognized as significant in their own right. Ford built its first 4x4 pickup during the 1959 model year and that truck is clearly considered collectible.

5. 1963 to 1988 Jeep Gladiator – It’s been called the J10, the J20, the Gladiator… and most often, simply the Jeep Pickup. Rugged and unique, particularly when equipped with four-wheel drive, the Jeep Pickup has a growing cult around it and there never were that many built even though it was in production for a quarter century. Think of it as the classic Wagoneer shorn of all that station wagon nonsense.

1. 1947 to 1955 Chevrolet 3100 – The “Advance Design” trucks were GM’s first post-war design and undeniably attractive. But they’re almost ridiculously primitive in stock form (a V8 was never offered) and something of a cliché when rodded out by guys with gray ponytails. If this is what you want, there won’t be any way of talking you out of it. But there better, cheaper alternatives that will be easier to live with everyday.

2. 1956 Ford F-100 – This was the only year Ford produced this generation F-100 with a wraparound windshield and to many – maybe too many – it’s the best looking pickup truck ever built. But because it’s a one-year body style it’s relatively rare and only getting more expensive. Restored stock versions are now $50,000 or more and there’s an entire industry that has developed around this truck to turn it into a hot rod. Great truck, but too expensive and too expected.

3. 1990 to 1993 Chevrolet 454 SS – Shoving Chevy’s big-block 454-cubic inch engine into the lightest half-ton truck should have produced a rocket ship. But the SS wasn’t especially fast – Car and Driver measured it accelerating from 0 to 60 mph in 7.1-second and running the quarter-mile in 15.7-seconds at 87 mph – and it had a ferocious appetite for fuel. Plus it was nose heavy and never as composed as it should have been. Less than 17,000 were produced, but it’s really not that great a truck.

4. Any Chevrolet El Camino or Ford Ranchero – They’re not trucks. Period. Those beds back there are just teases.

5. 1961 to 1963 Ford “Unibody” F-100 and F-250 – The idea was kind of bold. Build the cab and bed of a pickup as a single entity and then mount it on a traditional ladder frame. So technically these aren't “unibody” trucks, but that’s the name that they’ve been stuck with. The problem with these trucks is that when loaded with cargo the bodies would often flex and occasionally crack apart. It was an interesting experiment that simply didn’t work out.

Pickups effectively replaced the one-horse wagon that was the standard transportation tool for farmers going back to Mesopotamia and the dawn of civilization. So, well, there’s that. In the end, Classic is one of those terms elastic enough to encompass just about anything. So don’t take it too seriously.