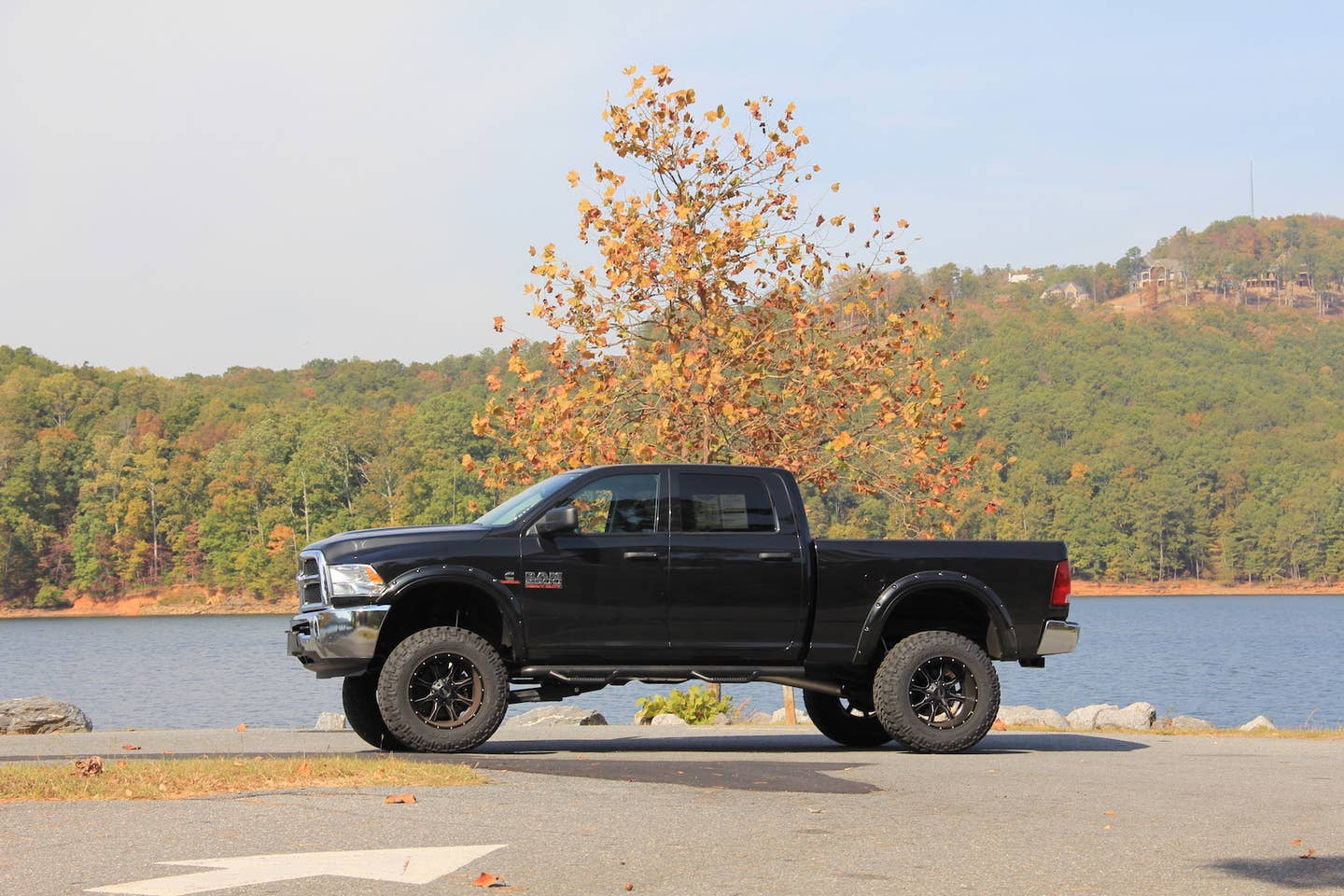 Every November, the SEMA pictures start circulating from Las Vegas and we’re bombarded with outlandish examples of what’s possible with a hundred grand or so invested into a truck. Some of these show rigs are lowered classics but the majority of the radical rides featured in Vegas are high-end lifted diesels.

It’s difficult to pinpoint exactly why lifted diesel trucks dominate the SEMA show perennially. Perhaps it’s because outside of the most important factor – money – newer trucks are a bit less complex to put together compared to their classic counterparts. I’m not saying they’re EASY, just not as complicated because the aftermarket available for these trucks is virtually endless.

When I see a big, lifted diesel truck pass by I tend to day dream about the practicality of owning and driving such a rig. Is it purely for show? Is the ride so terrible and the gas mileage so bad that you could only pull it out on Sundays? I was determined to find out.

I managed to get my hands on a 2016 Ram Crew Cab 2500 Turbo Diesel with a six-inch Pro Comp lift and 37-inch Nitto Trail Grappler tires for a day and this is my report:

As a who guy stands six feet, weighs about 195-lbs and considers himself fairly athletic, I can confidently say that most people would struggle climbing into this truck – including myself. It was a chore every single time but I eventually got used to the process. After a few attempts, I found the best way to ascend into the cab was by grabbing hold of the steering wheel and pulling my entire weight upon it to hoist me into the seat. This cannot be good for the truck but there was truly no other way. The 2500 was equipped with aftermarket sidesteps but they seemed to be more for decoration than anything. Getting out of the truck was just about as much of a task as I wasn’t sure how to make the awkward slide out look cool. I’d like to think of it as more of a controlled fall, if anything. With all that in mind, taking this behemoth out on date night is completely out of the question and you damn sure aren’t getting a baby seat in there if you have any little ones.

Once in the driver’s seat, everything is fairly status quo. It actually doesn’t feel as tall as it looks once you’re in the cab. Also, the vantage point you achieve by being almost a foot taller than any passenger vehicle on the road provides some clear advantages. And surprisingly, it doesn’t present too many new hurdles. Assuming you have the mirrors set properly, changing lanes isn’t too bad, either.

Pulling in and out of parking spaces isn’t exactly smooth sailing but that holds true for most full-size pickup trucks. I found being lifted didn’t necessarily help or hurt when parking. However, a back-up camera is absolutely mandatory on a vehicle this tall and long and thankfully this truck had one that displayed on the radio screen. Without the back-up camera, you’re destined to hit a curb, another vehicle or something much worse in the grocery store parking lot.

The 6.7L Cummins Turbo diesel boasts 370 hp and an astonishing 800 lb-ft torque resulting in a maximum towing capacity of right under 18,000-pounds. To put that in perspective, the largest Airstream available, the Land Yacht, weighs right at 8,000 pounds. So, two of those. And the torque and towing capacity are really what justifies purchasing a large diesel truck anyway. The Cummins Turbo Diesel powerplant can also be tuned to produce some wicked power if desired. Whenever you get a chance, check out some videos like this one to get an idea of what these motors are capable of producing. With all that torque, the RAM has no problems with the larger rotating mass and if it weren’t lifted up so much, I would have almost forgot the 37-inch tires were mounted.

It’s terrible. Bone stock, the 2500 Turbo Diesel is said to achieve, well, I’m not sure. Because of its size and weight, the RAM 2500 is not required to publish those types of frivolous figures. However, the real time MPG readout in the gauge cluster never reached 11 mpg. Yea, more like 10.1 – 10.3 the entire time and that included a lot of highway driving. So if fuel economy is your thing, perhaps look towards the 2500’s little brother, the EcoDiesel.