When the duo get a DB11 Prototype and a Vantage S hauling around Willow Springs, everyone wins. 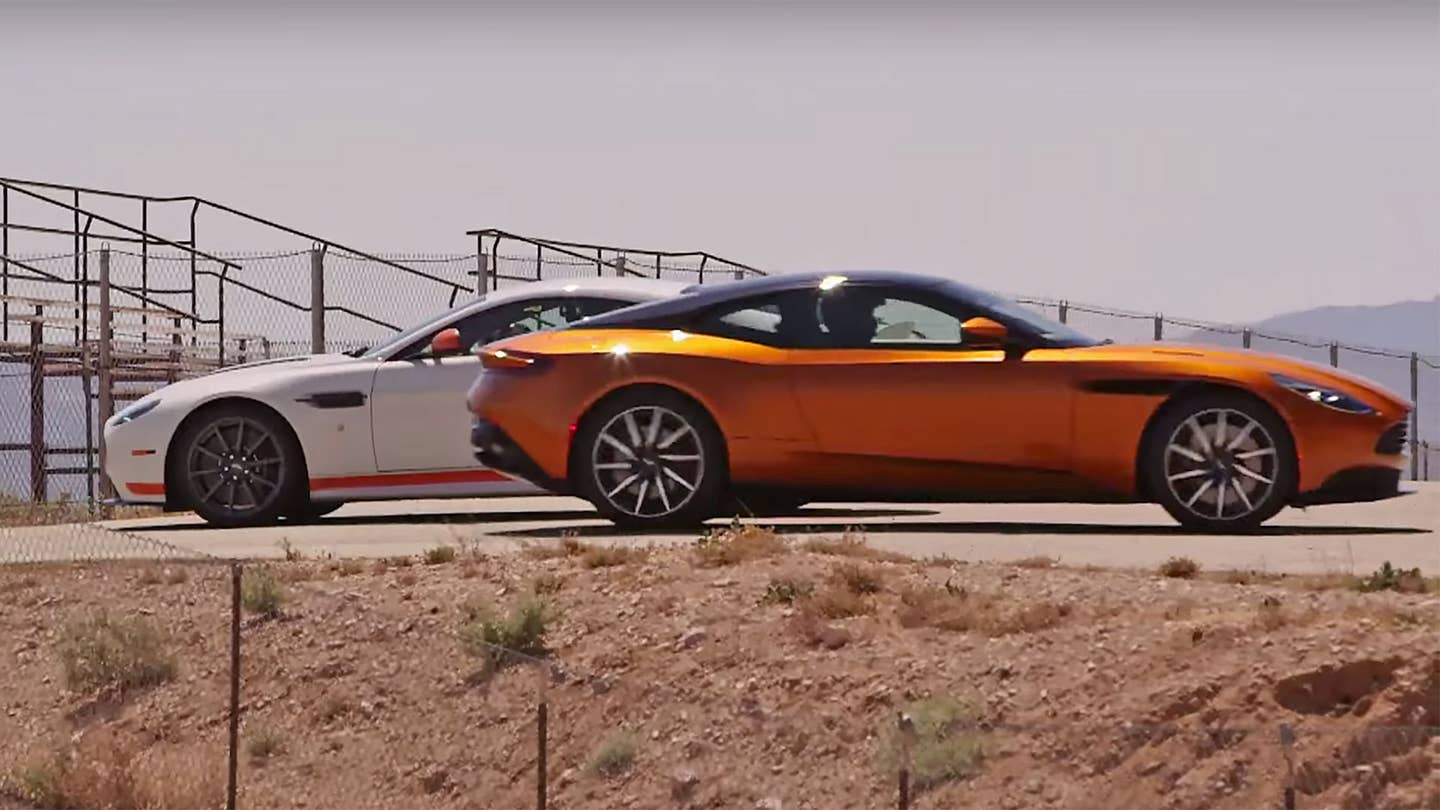 This video from Jay Leno’s Garage may be shorter than the usual weekly offerings, but what it lacks in time it makes up for in British supercars and one notable former Top Gear tamed racing driver, Ben Collins. We start with our favorite host getting special access to the Aston Martin DB11 Prototype – to be seen in the forthcoming James Bond film – and a walkthrough of the exterior from Miles Nurnberger, Chief Exterior Designer.

There are plenty of hints of the DB10 from Spectre in the DB11, Leno notes. Lots of nice, taut lines, muscular haunches and a striking presence, requisites for any James Bond coupe. The body of the DB11 is largely aluminum, with a trace of composite here and there. The lightweight metal is great for keeping the pounds off, though it can be hard to find in large enough sizes when you want to build a clamshell hood, but Aston Martin managed to pull it off.

Underneath that lithe bonnet sits a whopper of a 5.2-liter twin-turbo V12, good for 600 horsepower. Aston Martin has a similar program to Mercedes-Benz’s AMG “One man, one engine,” and the builder of this behemoth has his name etched atop the block. To help keep the DB11 planted when the hammer is down, Leno is shown how the air passes through the gap between the window and the C-pillar, through the boot and out the rear, offering high-speed stability without any drag penalty.

The car is beautiful when static, but even more so when Leno gets it out on the asphalt. Arriving at Willow Springs Raceway, a white and orange Aston Martin and a leather jacketed man await. That car would be the 568 horsepower, naturally-aspirated V12 Vantage S, and that man would be the one Stig-power Collins, most famous for wheeling many a car around Top Gear’s test track. Collins, a former race driver who also serves as a James Bond stunt driver, explains how he got the infamous BBC gig he was long forbidden from talking about.

“After twenty years of racing, I was looking for something new. I saw an ad, sent my details and [former Top Gear executive producer] Andy Wilman called me in. They gave me a Ford Focus and a a lap time they wanted me to beat,” Collins shares. After a few laps, he was dismissed, sans feedback from Wilman, who left Collins hanging for six weeks. Then the call came that he was hired. “I’m shy, so I was happy about not speaking. I enjoyed that helmet,” Collins said. “It was fun playing the perfect driving machine.”

The two set out for some laps, Leno playing the spy trying to get away from a drifty Collins, representing the baddie. While Leno, in the DB11, looks composed and neat, Collins, in the manual Vantage S, lets the backend sway hard. Leno, instructed not to push the prototype terribly hard, says he doesn’t notice a turbo lag, while Collins shouts about the joys of a V12 without any forced induction, as his tires spew smoke into the air. It’s a fun little segment. Check out the full video below.