Uber or Lyft? What Your Car Service of Choice Says About You

Polling the youth to learn the merits and misses of Uber, Lyft, and Car2Go. 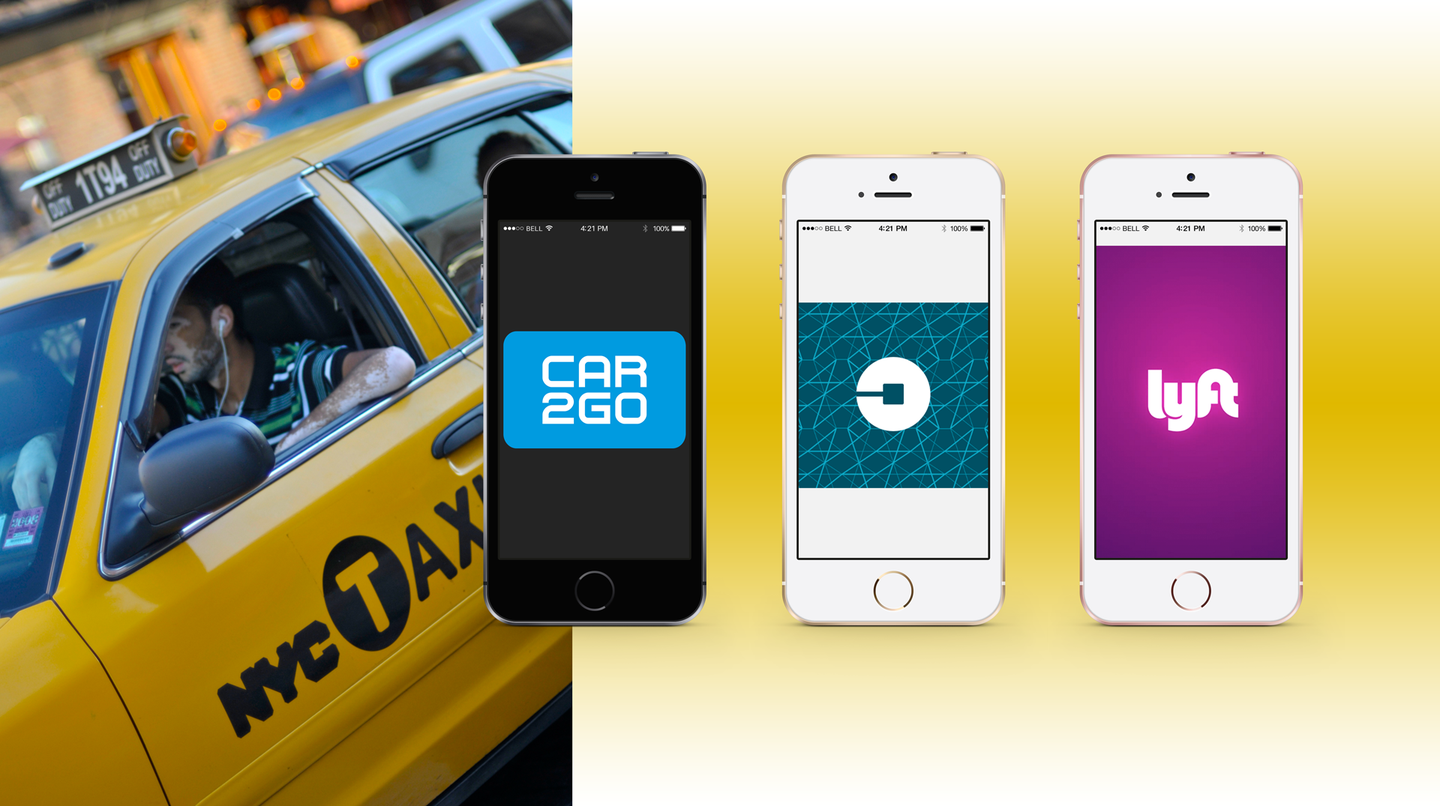 The scene: A Brooklyn sidewalk, around 9:00 PM on a Friday night. Four women, ranging in age from 27 to 39 years old, are between the two stages of their weekly ritual: tacos, followed by enthusiastic drinking. It is time to pile into a car-for-hire and head to the next destination to begin the second part of the night.

But which car-for-hire, exactly? Turns out, that can be a fraught question.

One of the four "angry producer-type" women in question is Cait Knoll, The Drive's resident video overlord. She describes the mediation thusly:

"The oldest one in our group, she's old-school. She has a thing for the classic yellow taxi—she doesn't like 'smelling the Uber guy's cologne,' which is crazy. But I'm an Uber VIP and I hate taxis because I had a bad experience in one where the driver was falling asleep at stop signs, hitting the guard rail. I jumped out, and straight into an Uber. Taxis are just gross, pretty much. But then the youngest girl in the group likes Lyft—I have no idea why. Lyft is, like, the poor man's version of Uber."

The choice, Knoll says, usually comes down to "whose turn it is to pay for the ride," but adds, "hell, even if it's not my turn, I'd pay just to take an Uber instead of a taxi. Clearly, I hate yellow cabs."

With the Millennial diaspora spread into Brooklyn and Queens—areas poorly served by the city taxis that are ubiquitous in most of Manhattan—many evening and weekend excursions now start with the tap of an app. And, it seems clear, many more young people in all parts of the country are choosing these options not just out of convenience, but because of brand equity. To find out what that is, exactly, we talked to a bevy of the under-30 crowd, both inside and outside The Drive's offices.

(Note: With respective funding in the billions of dollars, Uber and Lyft are the major players. We've also included car-sharing service Car2Go, because unlike Zipcar, Turo, and Enterprise CarShare, users can pick up a car and abandon it at a destination, making point-to-point travel a possibility.)

The consensus? Reliable, upscale and understated—mostly. Though Uber was not the first app-based car service, young people have the impression that it was, and therefore assign it “clout.” When Will, a 29-year-old writer, needed to get his cat to the (cat) emergency room immediately, he entrusted Uber with the swift conveyance of his ailing feline. (The cat has since made a full recovery.) The motto, “everyone’s private driver,” was bounced around by several people, all of whom made reference to the fact that to take an Uber sometimes felt like "playing adult"—isn't your grandmother the one that takes black cars to the airport?

Despite all that dominant goodness, Max, 25 assigns Uber, in its all-black seriousness, a persistent smell of “young money douche.” There’s a whiff of aspiration: the Smoothie Class, Lululemon Contingent, and SoulCycle Battalion all expressed a preference for Uber over Lyft for reasons of image. Jake, a 24 year-old consultant and a member of the world’s fanciest sweat-locker, Equinox Gym, slides his compression shorts exclusively into the backs of black Ubers, liking "the bit of fanciness." Also, "the branding."

Detractors call it “goofy,” while Angela, 27, deems it “unpretentious.” Initially, Lyft cars wore their iconoclasm literally, with giant, pink, fuzzy mustaches on the front bumper. Realizing that, while many find The Muppets endearing, few see a fluorescent mass of matted pink fur and excitedly yelp, “Guys, my ride is here!” in public. Lyft downsized the ‘staches, which now live on drivers’ dashboards. Somewhere, a colony of newly-shorn, pink, Smurf-like elves is weeping.

Caroline, 26, described Lyft as “quirky…the Zooey Deschanel of car services.” Eli, 27, finds that Lyft drivers are "chattier, in a good way," though many drivers drive for both services, so that impression might be cued by those aforementioned mustaches. Emily, 22, only takes Lyft because of the frequent discounts the service offers new users. Dan, 25, called Lyft the "aspiring actor" of the ride-sharing world—that is, always striving, and striving, and striving. Lyft seems to offer comparable service to Uber, but with less cachet.

Car2Go is the result of Daimler AG having two things: a surplus of last-generation Smart ForTwos, and a hunger to get into the car-sharing business. (Car2Go is the largest car-sharing service in the world, if not the US, with over one million subscribers.) Unlike other short-term rental companies, Car2Go allows users to drop off the cars at their destination anywhere in Brooklyn or Queens, and park for free. That makes it ideal for sober excursions with one or fewer passengers.

Isabelle, 24, of Sunset Park, likes Car2Go because it's "legitimately cheaper than Uber," though "dorky." After a $35 sign-up fee, costs are only $0.41 per minute, up to 150 miles, at which point a $0.45 per mile fee is incurred. An Uber trip from Sunset Park to Williamsburg is about $28. Car2Go? Around thirteen bucks, though of course you'll be driving yourself. Other users were "embarrassed" to be seen in the Smart ForTwos, and found driving them on larger roads intimidating. Still, one user describes it as a "cheap and cheerful" way to get to the start of an evening out, if not home afterwards. Drunk? Stick with Uber or Lyft.