The BBC has finally finalized the new hosts. Here’s your cheat sheet. 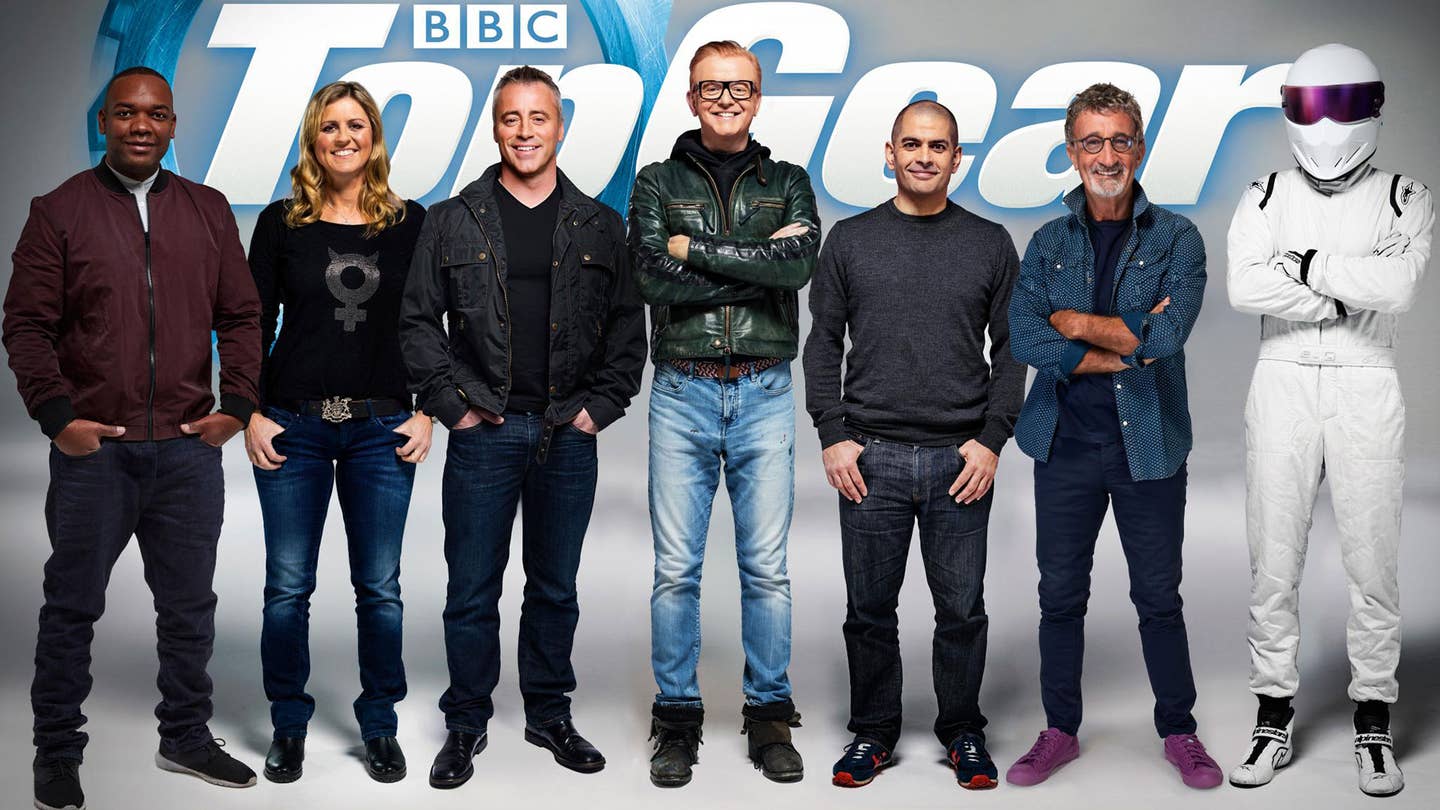 Ladies and gentlemen, please be upstanding for your new BBC Top Gear presenters—or hosts, if you hail from LeBlanc Country. Hey, how are they going to square that guy? Will dude ever mutter the word “conkers?” Can he keep his Hilux straight from his Taco? How many times in the premiere will the writers push him into hapless-buffoon Joey mode? We’ll find out in May, when LeBlanc, Nürburgring queen Sabine Schmitz, YouTube hero Chris Harris, ex-Formula 1 team owner Eddie Jordan, top banana Chris Evans and—shock horror—public-audition survivor Rory Reid are beamed into the world’s households for the first time.

There has been much hand-wringing among the TG faithful since the ignominious departures of Sirs Clarkson, Hammond and May last year, saying nothing of longtime show producer-cum-ideas-man Andy Wilman. The “fracas” between Clarkson and assistant producer Oisin Tymon—the fateful wing-flutter in what became a BBC-engulfing butterfly effect—begat these last 11 months of upheaval. Jezza has since decamped to Amazon Prime, where a new car show will keep him rolling in the big dosh; the new Top Gear host slate was the last piece to fall in the melodrama. Now that it has, the BBC need only guarantee that the new show isn’t utter shit.

Herewith, a handy primer to the personalities that will either make or break Top Gear.

• Why Was He Cast? Evans let James May drive his Ferrari 250 California. Oh, and he’s also among Britain’s most recognizable TV personalities, and is a fixture of vintage-motoring confabs like the Goodwood Revival. Think of him as Britain’s Jay Leno, but with slightly less chin. He’s also a ginger.

• Why Was He Cast? Jordan is a racing guy’s racing guy, but also someone who can make people who couldn’t give a toss about motorsport watch him—which has always been Top Gear’s greatest weapon; it gets your girlfriend watching, too.

• Prior and/or Additional Employments: The unofficial taxi driver at Germany’s Nürburgring Nordschleife. World Touring Car Championship competitor; she can make a Chevy Cruze move like a Corvette ZR1.

• Why Was She Cast? Her parents own a steakhouse adjacent to the Nürburgring that will serve you a raw steak on a glowing-hot stone. Also, her 10 minute 8 second lap of the ‘Ring in a Ford Transit van is the stuff of TG legend.

• Why Was He Cast? LeBlanc turned in the fastest Star in a Reasonably Priced Car time ever in 2012, a mark that still stands. Translation: Joey can wheel. He’s also an avid collector, and uses his social media presence primarily as a dumping ground for his car and motorcycle love. Also, if Top Gear is going to penetrate the U.S. market, it can’t hurt to have a colonial on board.

• Why Was He Cast? The camera loves Harris, who began producing irreverent, deeply knowledgeable video reviews for evo, and parlayed that into a rabid YouTube fanbase. Among enthusiasts, his name was floated more than most when it was learned that May, Clarkson and Hammond would need replacing.

• Prior and/or Additional Employments: Editor of U.K. car and consumer-tech site Recombu; spoken word artist of dubious talent, at least when reviewing Rolls-Royces.

• Why Was He Cast? Reid, easily the least recognizable of the presenter slate, passed through Top Gear’s open-audition process, which ironically may make him the most qualified to be onscreen. Funny, innit?

• Prior and/or Additional Employments: Erm…

• Why Was He Cast? Because this.