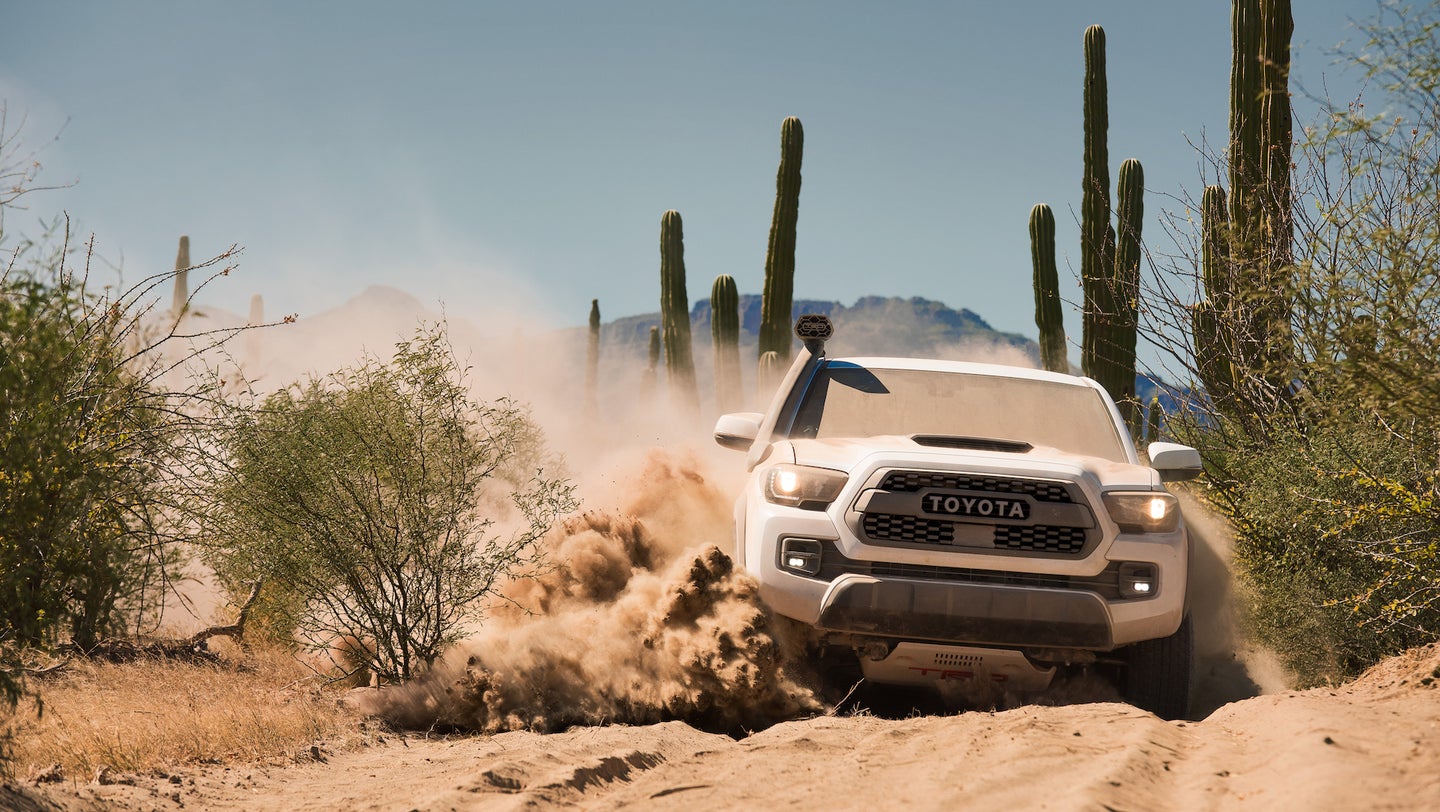 Toyota unveiled its new lineup of ultra-capable off-road vehicles at the 2018 Chicago Auto Show, and by doing so, it reaffirmed the brand’s commitment to the legions of like-minded fans that it has created since the trim line's debut in 2014. The next-generation TRD Pro 4Runner, Tacoma, and Tundra boast several new upgrades that are bound to make them even more capable than before.

The first of the trio to be unveiled was the Tacoma, and despite Toyota having teased us with an image of a snorkel-wearing truck ahead of the reveal, we couldn't help but fixate on the hardcore-looking duct-work mounted to the midsize truck's A-pillar once the wraps were pulled. Then, much to our surprise, Toyota suddenly referred to the "snorkel" as a "TRD Desert Air Intake" and not a, well, snorkel. "The TRD Desert Air Intake was designed to sustain consistent off-road performance no matter how dusty or dirty the terrain gets," said Jack Hollis, vice president and general manager of Toyota North America.

So, while water fording capabilities may have been improved by the new air intake, Toyota won't make an official claim because its only purpose is to allow the truck to breath cleaner air regardless of the terrain. The Drive is awaiting comment from Toyota on the performance of the new intake. Regardless of the disappointment, the Tacoma, Tundra, and 4Runner now ride on purpose-built 2.5-inch TRD Pro-exclusive Fox Internal Bypass shocks. If you think you've heard of them before, it's because you have—they also find their home on the uber-capable Ford F-150 Raptor.

The 4Runner was the last to get its 15-minutes of fame at the Chicago Auto Show, but the mighty SUV didn't disappoint. The new 2.5-inch shocks employ 46mm pistons and include seven bypass zones (four compression, three rebound) in addition to 11 bypass zones (seven compression, four rebound) in the rear, making it precise and manageable at high and low speeds. When it comes to rolling stock, 17-inch matte-black TRD wheels wrapped in Nitto Terra Grappler tires provide a one-inch wider track front and rear than the standard model. Other goodies include a standard JBL Audio premium sound system, a new roof rack, and a 1/4-inch-thick front skid plate.

2018 Chicago Auto Show: What to Expect