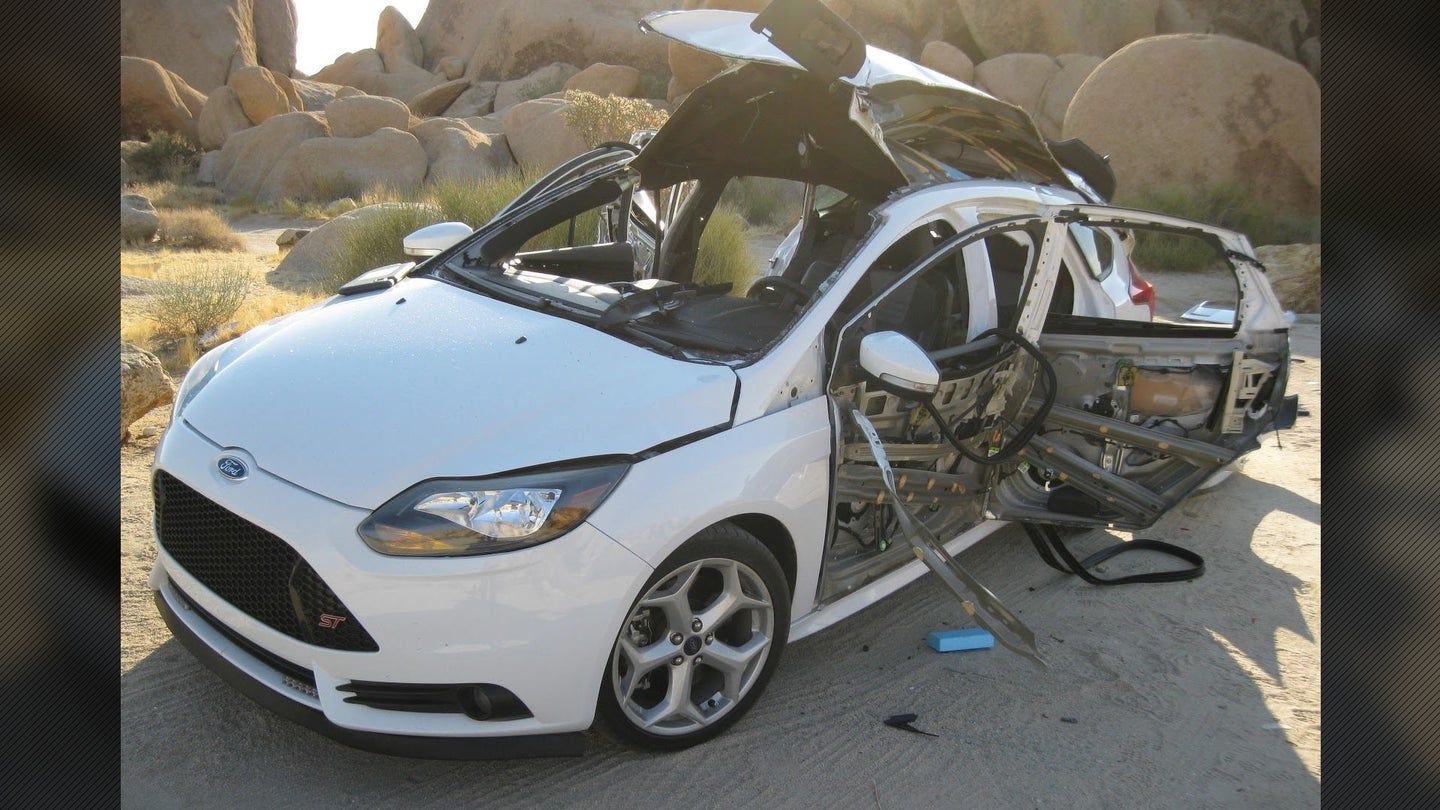 An exploding car can be a sight to see—but to be in one when it happens is... scary. It might seem like common sense not to carry around caustic or flammable materials in your vehicle, or maybe it's not a big deal to you. For one particular gentleman at Joshua Tree National Park in California, lighting a cigarette in a Ford Focus loaded with propane tanks did not seem like a bad idea.

The Joshua Tree National Park Association posted an interesting photo of a crumpled white Focus ST on their Facebook page last week. It's not immediately clear what happened to the vehicle, as there is no crash damage, burn marks, or other damage that one would typically find if a car was involved in a collision. Instead, panels are ripped to shreds and the vehicle is missing all of its glass - almost as if it had - quite literally - popped.

The post's comments were filled with people who attempted to guess how the car ended up in its current state, and after a little bit of guessing, poster revealed the actual cause of the damage. It turns out that the Focus was transporting a bottle of propane which had developed a leak. When the driver attempted to strike up a smoke, the flammable gas caused an explosion while he was still inside. All of the windows, with the exception of at least one rear-quarter, had blown out, and the roof ripped from its seams. Even the door skins themselves were somehow removed from the vehicle in the blast, and the door frames themselves pushed away from the jambs.

After the event, the driver reportedly called 911 to report his injuries. The park rangers found the man with burns on his face and had paramedics transport him to the hospital. Strangely enough, the operator who took the gentleman's emergency call chimed in on the Facebook post to ask if anyone knew the status of the young man in the explosion. No other information regarding the man's condition was made available at the time of writing.

This isn't even the first time something like this has happened in the past month. In mid-August, another couple in Florida had their Kia meet the same fate when transporting their grill. Though an expensive and dangerous lesson, this event reinforces the fact that traveling with any volatile materials can be very dangerous. Without taking proper precautions, like knowing the signs and smells of gaseous leaks, or simply not traveling with these materials in a closed car to begin with, you risk your life.