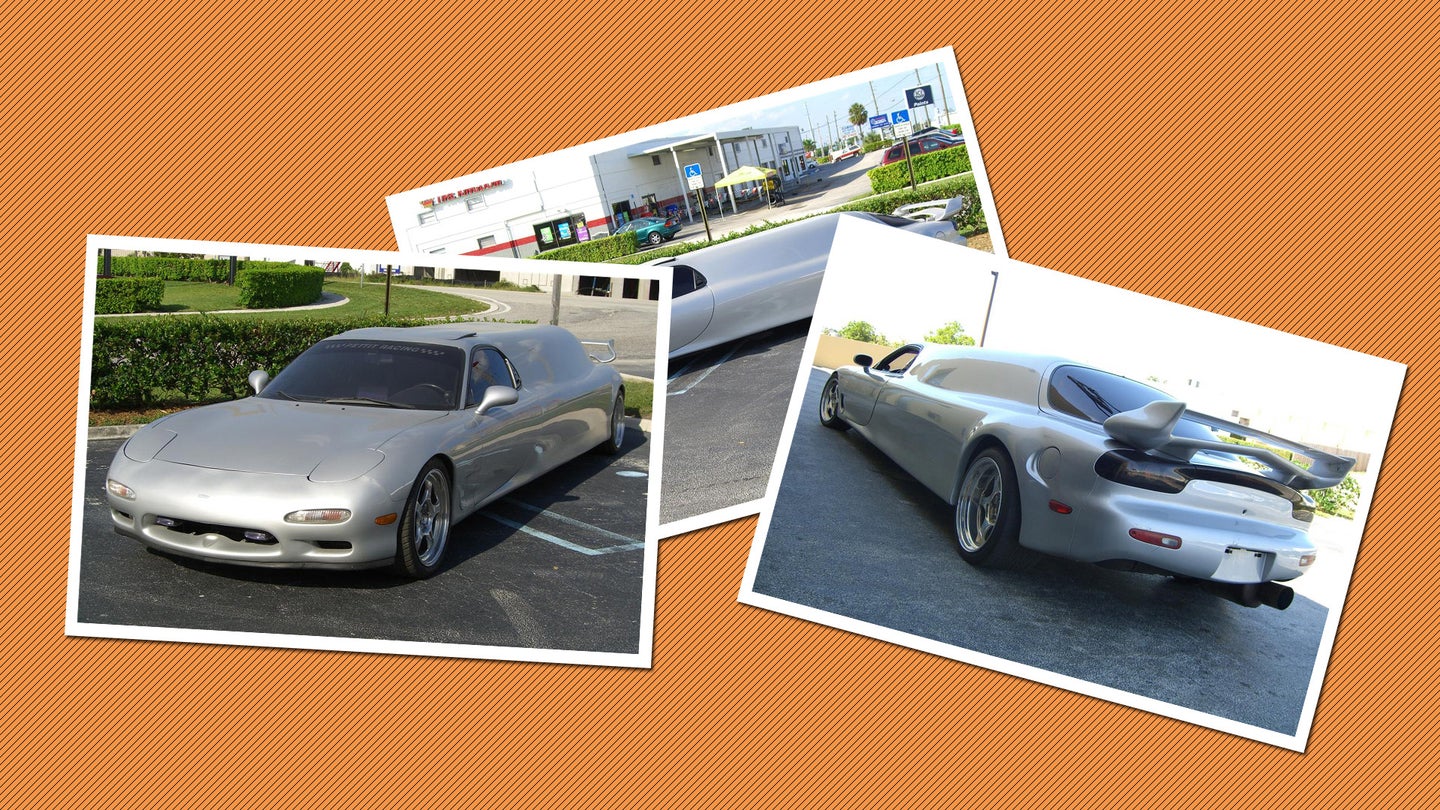 A blast from the past resurfaces as a one-of-a-kind limousine has begun to regain the spotlight on the internet after a decade of dormancy. This particular creation takes one of Mazda's most iconic creations, the FD RX-7, and blends it with something that might show up to a wedding.

1993 marked a huge year for Mazda's Rotary eXperiment division with the introduction of the FD-chassis RX-7. It's arguably the Mazda that is most well-known to auto enthusiasts aside from the Miata - after all, it was just plain hardcore in 1993. It was a true sportscar that derived from the Land of the Rising Sun. The car had a modern aerodynamic body that still holds its timeless design 24 years later, and a powerplant to back it up. The twin-turbo rotary engine pumped out 276 hoursepower in cars that were sold throughout Japan (though this number is greatly debated as being lower than the car actually made), however was limited to 255 horsepower in North American spec'd cars.

The car was built by a Florida-based company with a large footprint in the rotary scene, Pettit Racing. Rumors have it that Pettit built this car out of two wrecked - but salvageable - FD RX-7 cars. We reached out to them for more information about the build, but have yet to hear back. When sold, the chassis itself had a limited 62,000 miles, and the powertrain had less than 1,200 miles since it was completely revamped. The car still has a twin-turbo 13b rotary engine nested in the bay which has been built and street ported by Pettit for a few extra ponies at the top end. They've added a few aftermarket bits to the mix, including aftermarket engine management, exhaust, coilover suspension, and Forgeline wheels.

Originally, this car showed up on eBay for sale in February 2007 with a starting bid of $27,500. It didn't sell, and though the original auction page is no longer available, there is an archive of it available. Here is a brief transcript of the listing:

After failing to sell, it made its way to the Barret Jackson Collector Car Auction in Palm Beach, Florida. It finally sold for $21,450 (Less than Trump's Cadillac limo) on April 3rd, 2007 - a mere 13% of the $170,000 invested into the car. Today, a stock FD RX-7 will easily run a potential buyer north of $35,000 - still more than the limo sold for. The car was last spotted near Arecibo, Puerto Rico in March, 2008 - indicating that it left the U.S. mainland. Since then, it seems to have fallen off the map.

Work of art, or Frankenstein's Mazda? Regardless of how you may view the car, some serious work has gone into stretching it out. The stock handling has likely degraded and the car is probably about as quick as it was from the factory thanks to the added weight, but could you imagine the cool factor of leaving your big day in this?