It’s far from finished and not quite road-worthy, but it has successfully hauled its first payload—hopefully of many. 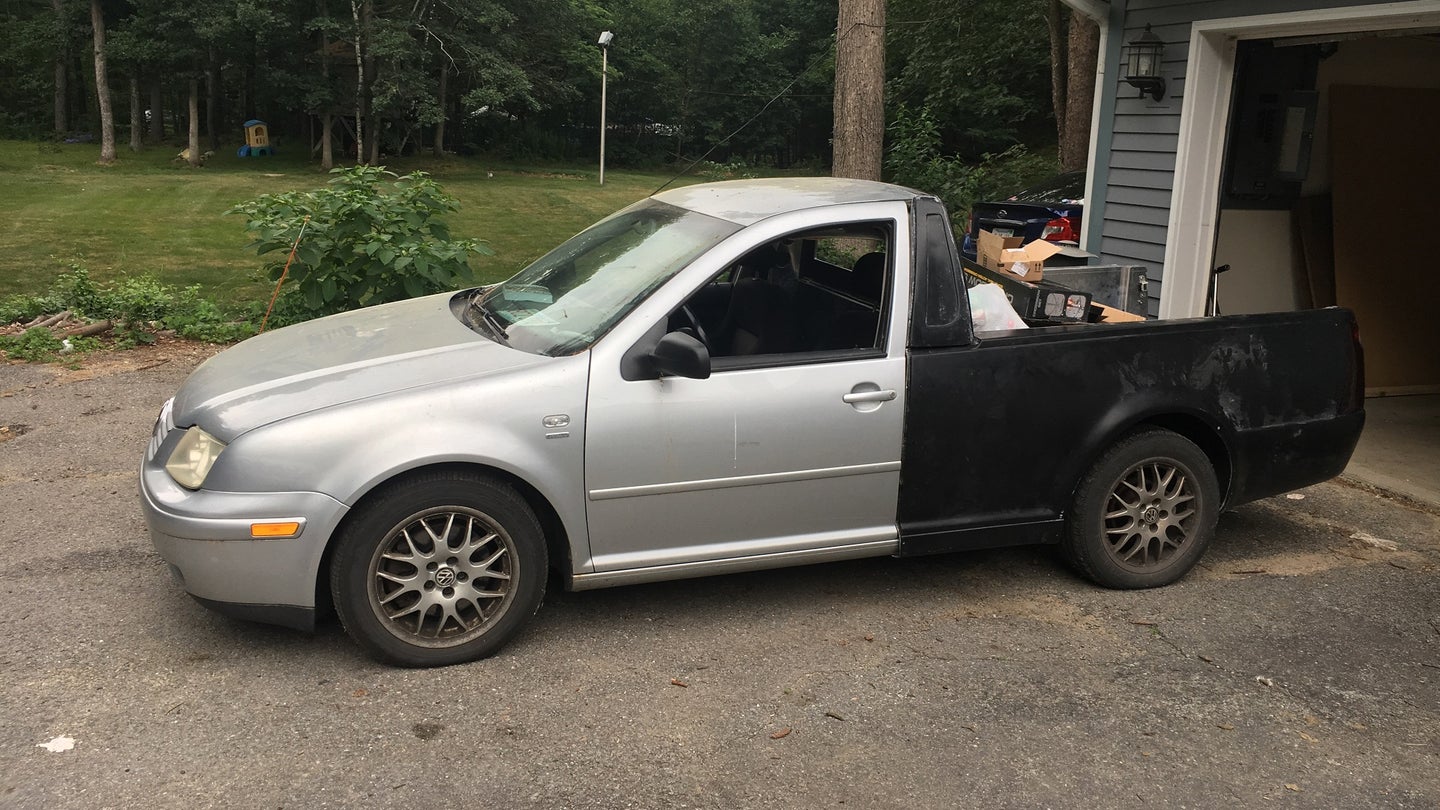 We've reached another major milestone in our VW Jetta Smyth Performance Ute project: hauling stuff around. Even though it's still not quite roadworthy, there's no law against taking it up and down our long private driveway to bring the trash and recycling to the curb. I'd already recharged the battery while wiring up the tail lights, and it had no trouble starting and leaving the garage under its own power for the first time since this build began.

It's not quite as finished as that first picture makes it look. I've attached the new left rear quarter panel, tail light and all, but I have yet to give the right side the same treatment. You can see the Monsoon amplifier bolted to the side of the bed in the rear door opening (this will be covered by the new quarter panel), as well as some wiring for the right tail light, which I taped into place for this quick excursion. There's also a little bit of fender rust to take care of before covering up this side of the car. Fortunately, the dents above the rear wheel will be completely covered by the quarter panel once it's installed.

After receiving the backordered hardware the tailgate is now fully operational, but I removed it for this trip. Another piece not yet attached is the roll pan, which sits below the tailgate and connects the rear of the quarter panels together. I already installed and wired up the license plate lights in the roll pan, but without the right quarter panel I can't install it yet, so I temporarily taped it into the bed.

I freely admit that it was totally unnecessary to pull the Jetta out of the garage for this simple task, but I felt like it. Besides, chucking the household trash and recycling into the bed was much easier than shoving it into my wife's Ford Flex, as well as easier to unload at the other end. The car didn't seem to bend or twist at all over our uneven driveway despite the extensive body modifications. That's a great sign, considering that all of the structural components of the Ute conversion are in place. There were numerous creaks and rattles from the new bodywork, but I'm nowhere near finished securing it into place, so that's to be expected at this stage.

The best part of the satisfaction was taking this car that I've rebuilt with my own hands over the past several weeks and driving it in its new form for the first time. It was only down the driveway and back, but that doesn't diminish the feeling of accomplishment I'm getting from this project. I can only imagine what it will be like once the car is roadworthy again and I'm driving it down the street. But first, I need to finish the bodywork. That will be this weekend's project.

Before the bodywork goes on, it’s time to wire up the new rear lighting.