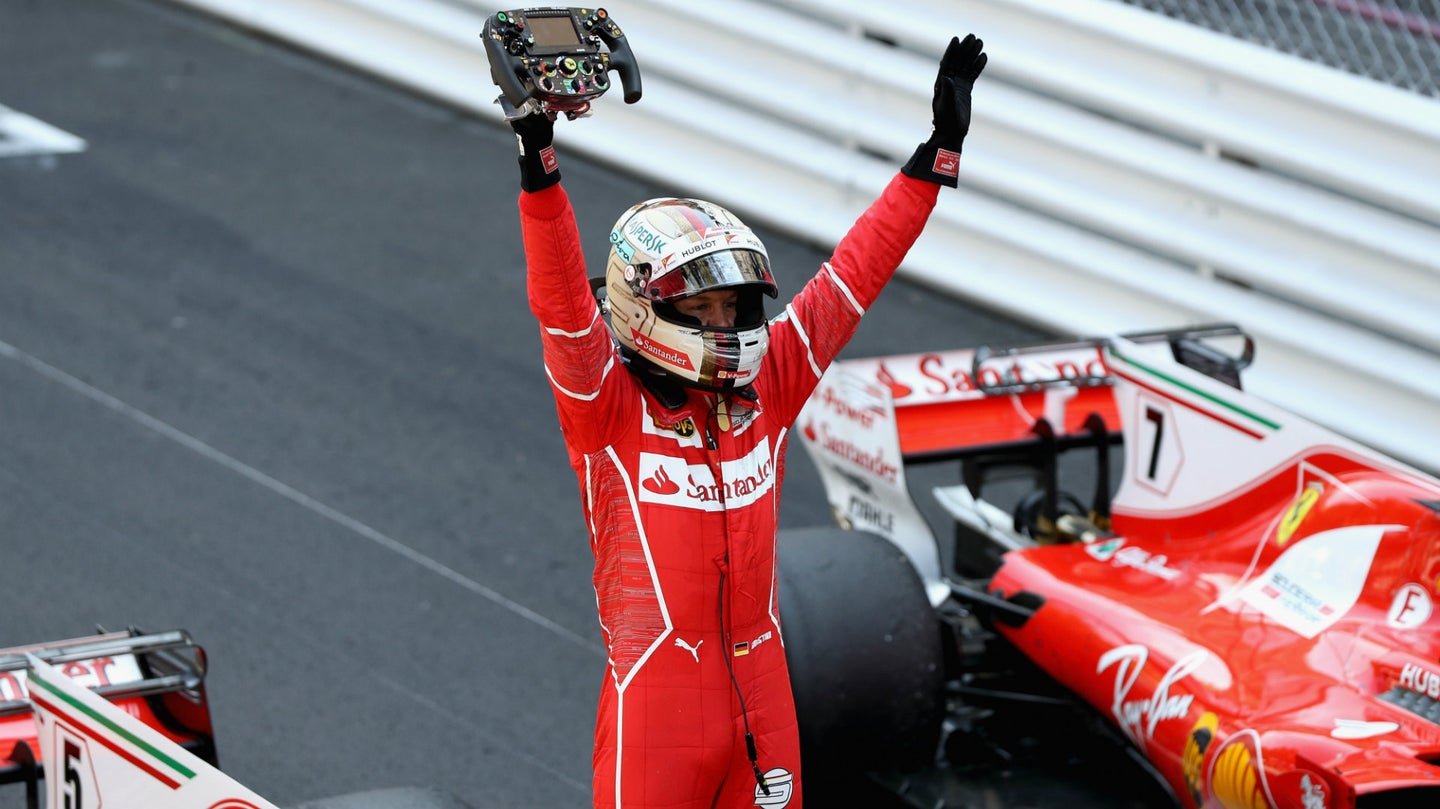 On Sunday, Scuderia Ferrari's Sebastian Vettel and Kimi Räikkönen brought home a 1-2 finish for the Italian team at the Monaco Grand Prix. The pair reversed their qualifying order; Kimi was ahead of Sebastian at the start of the race, and held a lead until both cars had pitted. With a combination of Räikkönen being held up by midfield traffic and Vettel having clean air in which to run, Vettel found himself ahead of Räikkönen—his 1:15 laps putting him at an advantage over his teammate. The podium was completed by Red Bull Racing driver Daniel Ricciardo, who would have won last year's event, had it not been for an infamous pit stop choke.

The race itself was drab, with moments of brief intrigue arising from the occasional accident and retirement—of which there were seven. Hopeful prospects for multiple mid and lower table teams were dashed, as both Saubers, both McLaren-Hondas, a Renault, a Williams, and a Toro Rosso retired. More on that here.

Some curious trivia about this race in particular remain. As mentioned, this was Ferrari's first time winning the Monaco Grand Prix since 2001, when Michael Schumacher won it, followed by teammate Rubens Barrichello—the one-two finishes at both the 2001 and 2017 events mirroring each other.

The fastest lap of the race was not set by any of the top three teams, which included Mercedes, Ferrari, and Red Bull. Instead, it was set by Sergio Perez of Force India on lap 76, when the Mexican driver put in a 1:14.82 lap, which not only was the fastest of the race, but also sets a new lap record for the Monaco Grand Prix circuit.

A funny side note: Jenson Button's failed overtake on Pascal Wehrlein which put the Sauber into the wall earned Button a three-place grid penalty at his next race...if he ever races again.

Driver of the Day was voted to be Sebastian Vettel. The official highlight reel of the race can be found below.

7 of 20 Drivers Retired from Today’s Monaco Grand Prix. Why?

35 percent of the drivers who started the race didn’t finish. Here’s what happened.