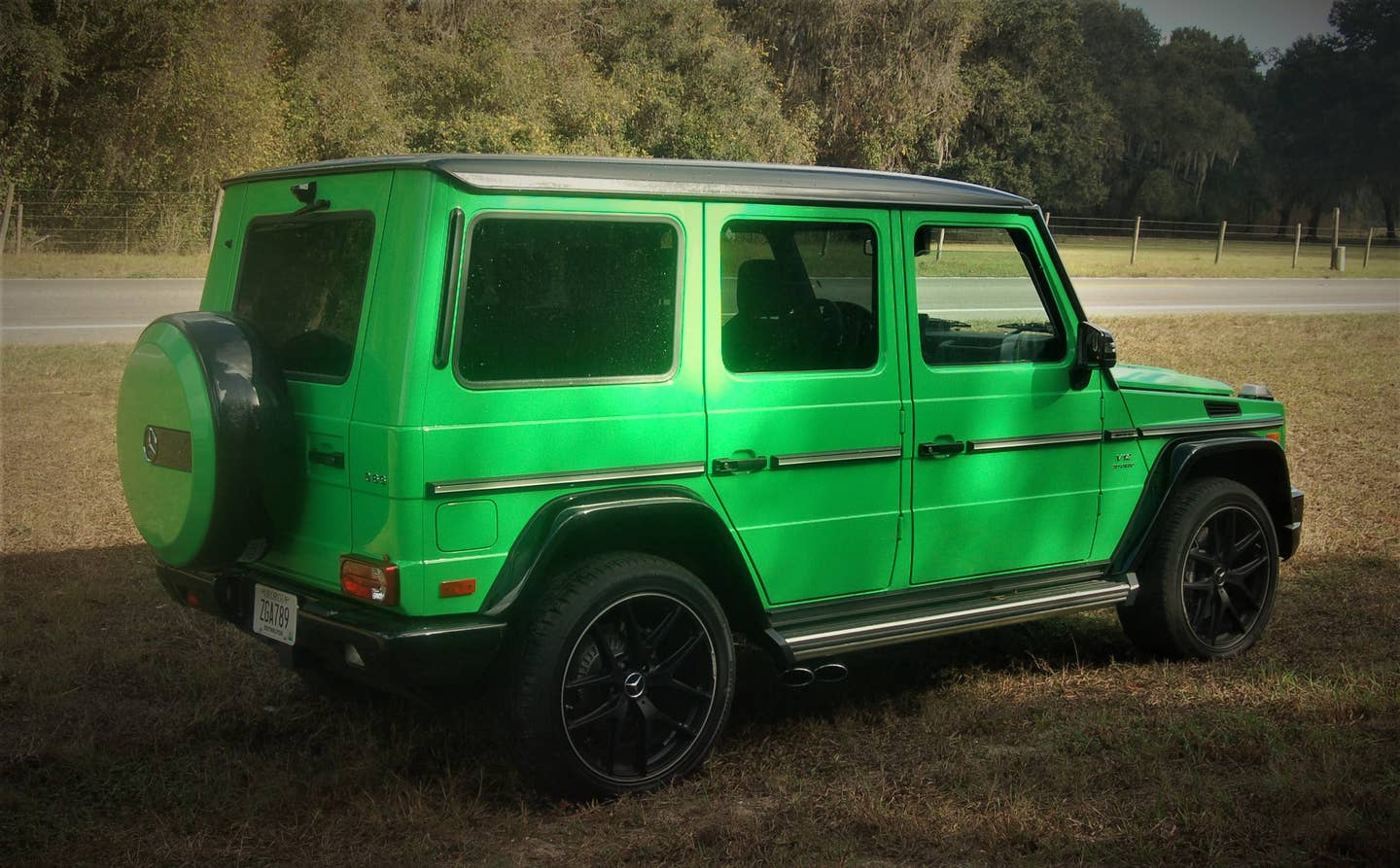 Years ago, decades actually, an editor at Car and Driver magazine, tasked with spending a week in a car that he found personally embarrassing – it may have been a Pontiac Trans Am with the full complement of bird decals – asked if it was OK if he had a couple of magnetic signs made up to sick on the doors that said, “This is NOT my car!”

Turned out, it was not OK, as the ad department claimed Pontiac’s checks always cleared. But more than once, I’ve thought it might be nice to have a couple of those signs. Not for a Trans Am – as owner of a 1977 model with the T/A 6.6 V8 and actual Hurst T-tops, I was fine with the birds. But maybe while driving one of the first Yugos to come to America. And a Zimmer. And a Laforza.

And, possibly, the 2017 Mercedes-Benz AMG G65, painted what Mercedes calls “Alien Green.” Within a day we were calling the color Soylent Green. (If you are under 25, look it up. And be aware that Soylent Green… is people!)

No Ferrari or Lamborghini has received more attention, especially from police officers, than this Soylent Green G-Wagen. Three officers, busy handcuffing a guy behind a maroon Mitsubishi Eclipse, stopped and stared. As did the alleged perp.

Parked at the Dollar General store on Christmas Eve next to every sagging ’96 Ford Explorer ever made, as I answered a craving for Fig Newtons, I could feel people thinking, “Look at that rich bastard doing his Christmas shopping at the dollar store!”

Every employee of Krispy’s Fried Chicken crowded around the drive-in window. Did I have it painted? No, that’s the factory color.

How much is it?

Pause, because I know what the reaction will be. “It’s $236,325.” And the reaction is as expected: Polite nods, followed by backing away slowly. I know the feeling: The property value of my house is roughly doubled by parking the G65 in the driveway.

The G-Wagen is well into its fourth decade, with minimal changes since it was designed as an ultra-heavy-duty off-roader that might, and did, appeal to various military types, as well as individuals and companies that thought the Land Rover or Toyota Land Cruiser might not be rugged enough.

Everything on the G is incredibly overbuilt, explaining why a vehicle only 188 inches long weighs in at three tons. AMG has done all it can to mask that mass, but try to stop it, or steer it through a tight 90-degree turn, and you are immediately reminded of the sheer bulk. This is, after all, a body-on-BIG-frame SUV with massive underpinnings; it’s as though everything Mercedes test drivers have ever broken was re-engineered on a locomotive scale.

Under the hood of the AMG G65 is a 6.0-liter twin-turbo V12 that pumps out an appropriate 621 horsepower and 738 pound-feet of torque. I’ve never had so little fun with so much power. Fuel mileage is EPA-rated at 11 mpg city, 13 highway, 12 overall. And I had trouble matching even those grim figures. Transmission was a seven-speed automatic appropriately matched to the engine’s strengths.

Up to now, though, I’m not complaining about any of this. Here’s what perplexed me: This hugely capable off-roader, with triple locking differentials, a two-speed transfer case, 4MATIC all-wheel-drive and a four-wheel electronic traction system, wore lightweight 10-spoke, 21-inch AMG wheels and 40-series Continental tires that were far more suited for track days than trek days.

Add to that the low-hanging chromed dual exhausts that exited beneath each rear door that would have been flattened by the first rock, and we would have loved to have told you how well this G65 works off-road, but we were nervous about taking it on anything more challenging than our sand driveway.

Clearly, though, I’m not the target demographic for the Soylent Green G-Wagen, because I’m not an NBA rookie with a signing bonus. That customer will enjoy the attention, the optional ($15,000) Performance Studio Package, which included stuff like carbon fiber trim, painted brake calipers and “obsidian black” exterior highlights. (Note that the added-on cup holder is just a little hoop, with a mini-basketball-style net hanging from it.)

That target customer will never get closer to the Rubicon Trail than when the team plane overflies it; he’ll be delighted with the G65, its very comfortable interior (except the rear seats, unless the NBA player’s friends are much shorter), its kick-ass Harmon-Kardon sound system and its stellar handcrafted engine which, as it was being built, had to wish it was going to be bolted into a slightly different AMG product.