Goodwood Is the Perfect Time Machine

Want to go back to a time that was great? Go here. 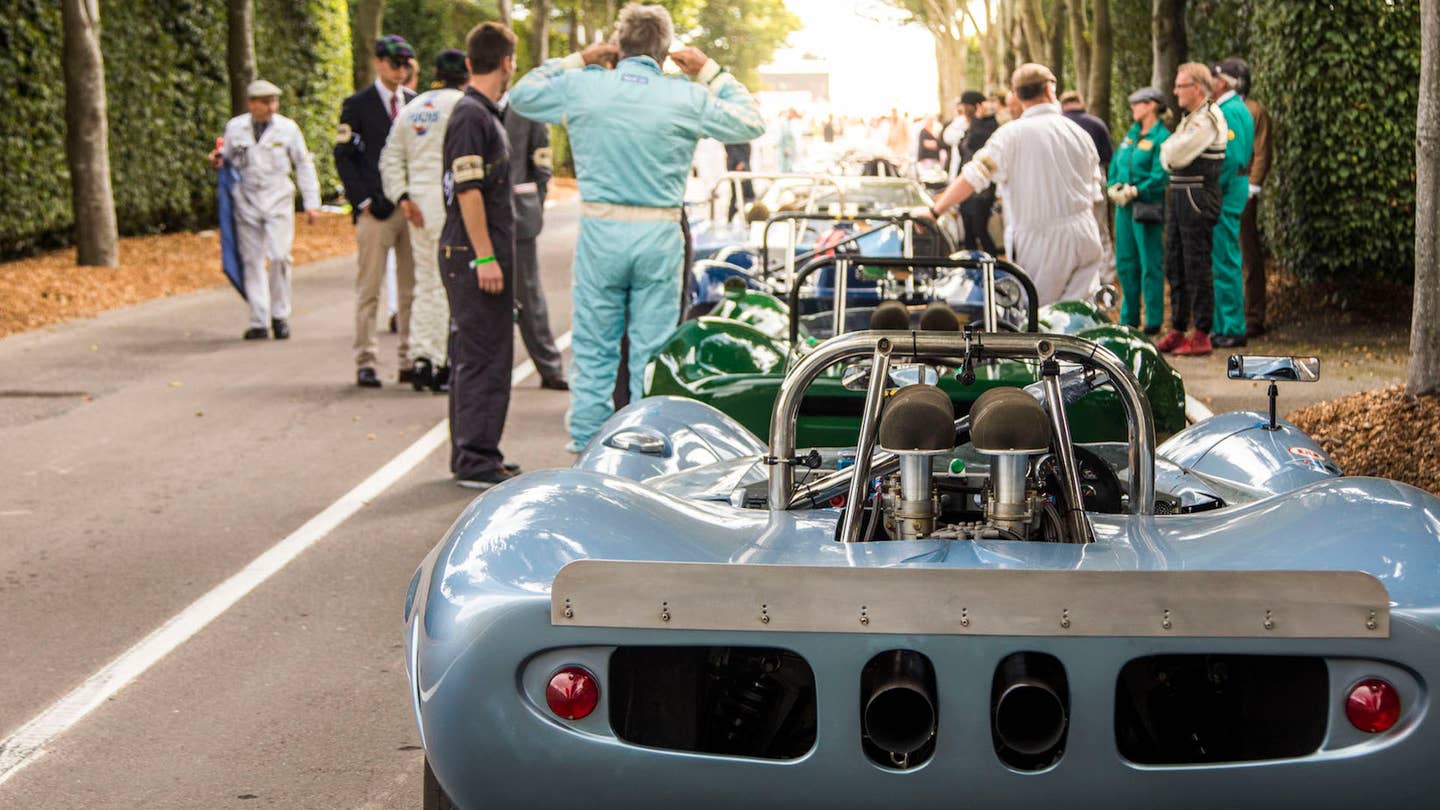 Before our helicopter even brushes the lawn at the Goodwood Revival, surrounded by gleaming Spitfire fighters and England’s only air-worthy Lancaster bomber, it’s clear that this is no ordinary car show.

A phalanx of pristine vintage Jeeps and Land Rovers rolls up to escort us, driven by Brits in World War II uniforms. We stride into a brilliant recreation of an RAF officer’s mess hall—traditional English breakfast being served, Veuve Cliquot about to flow—and past a typing pool of pretty secretaries in Forties-style pin-curls, as an onstage band and actors perform a live old-time radio show.

I’ve already toured Winston Churchill’s war rooms in London, the barely-below-ground basement where the prime minister and his cabinet plotted the war during the Blitz. The tour included the closet that Churchill let everyone assume was his private toilet—but actually held his secret hotline to FDR, with the world’s first digital scrambling device to avoid Nazi wiretapping. Now, in my first awestruck glimpse of the Goodwood Revival, the re-creation is so spot-on that I’m tempted to flash a salute, palm-up in British style.

It was all war back then, including on racing circuits where men were men. Meaning drivers died as routinely as soldiers in trenches. Like some other storied British tracks, including Silverstone, Goodwood started as an RAF wartime airfield, where testosterone-fueled military men raced Jeeps around perimeter roads. In 1948, the royal owner of the Goodwood House and its 11,500-acre estate, Freddie March—an accomplished racer, engineer, RAF pilot and the 9th Duke of Richmond—turned those West Sussex roads into Goodwood Circuit and organized the nation’s first post-war professional race. (The family Dukedom traces to 1675, when King Charles II granted it to Charles Lennox, the illegitimate son of his union with a royal French mistress). And the picturesque 2.4-mile circuit, among the chalk hills and nearby seaside resorts of England’s South Downs, was soon the site of historic battles between drivers like Fangio, Moss and Gurney, driving everything from 500cc Coopers to Grand Prix cars. Bruce McLaren died here in 1970 at just 32 years of age, when the Can-Am car he was testing, powered by a 670-horsepower Chevy big-block, shot off the Levant straight at nearly 170 mph and threw the New Zealander from the wreckage.

Goodwood had closed to competitive racing four years earlier, not long after Formula One cars doubled engine displacement to 3.0 liters, creating speeds that threatened to outpace the circuit. The 50th anniversary of that “Return to Power” is highlighted here, with a re-creation of the pits at Reims in ’66. These classic and evocative F1 warriors that took wildly varying approaches to 3-liter power: Brabham’s old-school, durable, championship-winning General Motors-based Repco, with other V8's from Alfa Romeo and Cosworth; A flat-12 Ferrari and V12 Maserati; and BRM’s daring-yet-troublesome H16, with two flat V8s stacked atop each other.

It took Freddie March’s visionary grandson, Charles Gordon-Lennox, Earl of March, to recreate this circuit in sparkling detail, even down to the hydrangea bushes along the front straight. The dapper Lord March, who I’ll soon meet atop a former air control tower to watch nostalgic beauties storm the track, held his first Revival in September 1998, 50 years to the day that his grandfather hosted the first race here. Like an anxious party host, Lord March expected perhaps a few hundred neighbors. 20,000 visitors showed up. This three-day Revival finds 210,000 enthusiasts tramping his lawns, most in period dress: Vintage garage coveralls, wasp waists and pencil skirts, mods and rockers, and acres upon acres of Harris Tweed. Another 150,000 now attend the annual Festival of Speed. In other words, one hell of a backyard party, with legendary drivers duking it out in vintage racers; a historic airshow, car auctions and smart shops; live bands, ballroom dancing, roller skating and a carnival; and enough pints and champagne to lubricate this automotive army.

For people who grow tired of slovenly, frat-house American attire, Goodwood is a refreshing change from a typical homegrown race: There’s nary a confederate flag, overloaded halter top or cargo-shorted slob in sight. The odd costumed hippie, rockabilly type or Austin Powers-style mod is about as rebellious as it gets. I do spot an aging British motorcycle club, resplendent in leather, skull rings, biker caps and vintage Triumphs and Nortons. A few showgoers don’t seem to be playing dress-up, looking only too comfortable in tweed, derbys and ascots, perhaps laid out and brushed by a butler. Stepping down a few social classes, I score a pair of black Chelsea boots, my first since my own Detroit garage-rock days, and watch leather-clad riders sprint to their bikes for a thrilling LeMans-style start in the Barry Sheene Memorial Trophy.

This 2016 Revival honors Sir Jack Brabham, the recently departed Aussie motorsports hero who remains the only F1 driver to win a championship with a car bearing his own name. But Goodwood also spotlights more-oddball events, including this year’s remembrance of England’s last World Cup soccer winner in 1966, complete with strolling, chanting fans and a Field of Dreams style re-creation. A celebration of the 70th anniversary of the bikini is marked with a parade float of the then-scandalously clad.

Swimsuits turn out to be appropriate for Saturday. The notoriously fickle English weather douses Goodwood for the entire day, turning its grounds and track sodden. But nothing dampens the spirit. Racing action continues unabated, including in brawny open-cockpit, skinny-tired Alfas Romeos, BRMs and other post-war beauties. The St. Mary’s Trophy is a soggy highlight. It features mechanically identical Austin 30’s and 35’s, fifties saloons whose clown-car shapes, taller than they are wide, seem almost comical on track. That is, until ace drivers – including record nine-time LeMans winner Tom Kristensen, five-time LeMans Corvette class winner Oliver Gavin and former British F1 star David Coulthard – begin duking it out like a Grand Prix title is on the line, rather than a trophy handed over by Lord March. The Austins highlight yet again how lightly powered cars can make for great racing, rewarding and revealing true driving talent.

And how talented and fiercely competitive is this field, slip-sliding like mad in the rain? Andrew Jordan, the 2013 British Touring Car champion, takes first place. Kristensen, Gavin and Coulthard finish far off the podium. Coulthard crosses the line to take an amusing 22nd place.

Kristensen has already shown his more-stylish stuff in the inaugural Kinrara Trophy. The Audi star takes his first-ever practice in a glorious 1961 Ferrari 250 GT SWB just that morning. Yet he slices through the field like butter in the silver V12 Ferrari, his brake rotors glowing red, headlights slicing the faltering daylight.

Lord March arrives for our interview at the tower wearing a tasteful double-breasted wool suit and horn-rimmed spectacles. The Earl of March and Kinrara has the requisite aristocratic bearing and manners to match. Yet he’s warm and gracious, a huge rock fan who invited ZZ Top’s Billy Gibbons to play his Festival. He owns a Lancia Aurelia, which he calls “probably the best car in the world in the fifties.” But his personal cars include a 1929 Ford Model A hot-rod truck that he bought after watching it run on the Bonneville Salt Flats, his son and daughter equally smitten.

Lord March enthuses over Kristensen’s epic drive in Ferrari, and recalls the humble beginnings of the Festival and Revival, now two of the world’s bucket-list car events.

“We had no idea what we wanted to do with it,” he says. “We set up the first Festival in front of the house to see if anyone remembered Goodwood and these cars. And when we first raced here in 1998, we raced on the original tarmac.”

What’s exciting to me is that we’ve created this backdrop, really.”

As Ferraris, Fords and Astons shriek down the track, forcing us to raise our voices, I ask Lord March about cars and music alike. He notes that Charlie Watts has been spotted on the grounds today, then finds an elegant, apropos link between the soundtracks of our lives.

“When we put these drivers back in their original cars, like an Emerson Fittipaldi in a Lotus, it’s like putting on a perfect old album. Cars evoke the same kind of memories as music, the ones you want to pass on to your grandchildren. You're trying to evoke a time and place, and that's a very powerful thing."

“It’s the noise people fall in love with, isn’t it?” he says over the din of internal combustion. “I’ve seen men cry over it.”

When it gets slippy on the tarmac, every adjustment matters.