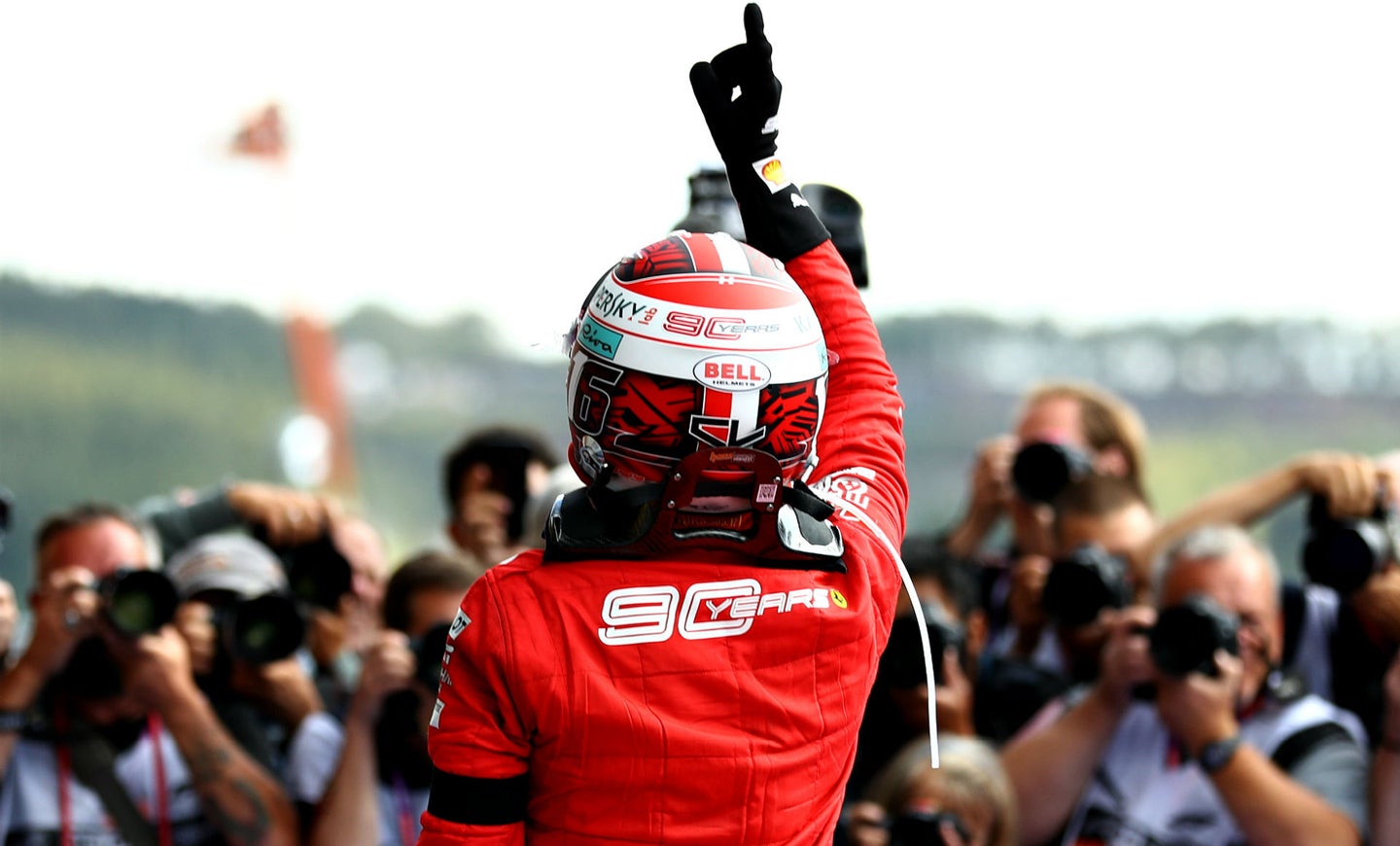 Charles Leclerc proved that the third time really is the charm as he converted career pole position number three into his first Formula 1 victory at the historic Spa Francorchamps circuit. The 21-year-old Monegasque driver commanded the 44-lap race from start to finish, besting the ever-pressing Mercedes of Lewis Hamilton who was joined by teammate Valtteri Bottas on the podium, the Silver Arrows earning P2 and P3 at day's end.

Leclerc's immediate competition at the start was Ferrari teammate Sebastian Vettel, who started alongside him on the front row and was hungry to gain his first victory since last year's Spa race. Maneuvering cleanly out of the famous La Source hairpin on lap one, Leclerc plunged on to the Raidillon/Eau Rouge complex that led to the Kemmel Straight, completing a sector of the track that would benefit Ferrari's SF90 race car throughout the day.

Max Verstappen of Red Bull Racing didn't have the same luck when the lights went out as he braked too late and crashed into Kimi Raikkonen, damaging his track bar and disabling his RB14's steering as he went uphill into Eau Rouge. Verstappen would retire on lap one after running into a barrier due to his lack of control, ending a streak of 21 consecutive races finishing in the top five.

Meanwhile, Leclerc held the lead as Vettel ran a different strategy, the German becoming the first of the frontrunners to pit for medium-compound tires. Leclerc would follow a handful of laps later, then being covered off by both Mercedes. However, while he was in the pits, Vettel was assaulting the 4.352-mile circuit and managed to build a gap that would place Leclerc in second place once he rejoined the track.

This did not last long, however, as Ferrari's pit wall ordered for Vettel to let Leclerc by on lap 27. Instead of controversy surrounding the call, this was certainly the right decision as Leclerc had been gaining in laps prior and had fresher tires to last him until the end of the race. Paired with his advantage over Vettel in qualifying, Leclerc had earned the team's favor who was looking to end its race-win dry spell.

It looked as if Ferrari was on its way to a one-two finish, collecting its first win of 2019 in the process, but championship leader Hamilton was in hot pursuit of Vettel. The two fought for position in the second half of the race, playing to Leclerc's benefit as his teammate staved off Hamilton, making room for him at the front of the pack.

Hamilton would eventually pass Vettel, both going into survival mode due to their degrading tires. Instead of staying out and risking a blowout or race-ending crash, Vettel pitted a second time for soft tires and went on to set the race's fastest lap, albeit a place behind Bottas and therefore stretching the gap to both Mercedes men in the Drivers' Championship.

Leclerc survived a late-race charge from Hamilton, although it was a bit worrying for the Tifosi as the gap narrowed to under two seconds on the afternoon's final lap. No one could outdo young Leclerc, though, as he was motivated to win in honor of his childhood friend and racing compatriot Anthoine Hubert who was killed in a horrific Formula 2 crash on Saturday.

“On one hand… a dream since being a child that has been realized,” Leclerc told David Coulthard after the race. “On the other hand, it has been a very difficult weekend since yesterday. We have lost a friend first of all. It’s very difficult in these situations so I would like to dedicate my first win to him."

“We have grown up together," Leclerc continued. "My first ever race, I have done it with Anthoine when we were younger, there was Esteban [Ocon], Pierre [Gasly]. It’s just a shame what happened yesterday, so I can’t enjoy fully my first victory, but it will definitely be a memory I will keep forever.”