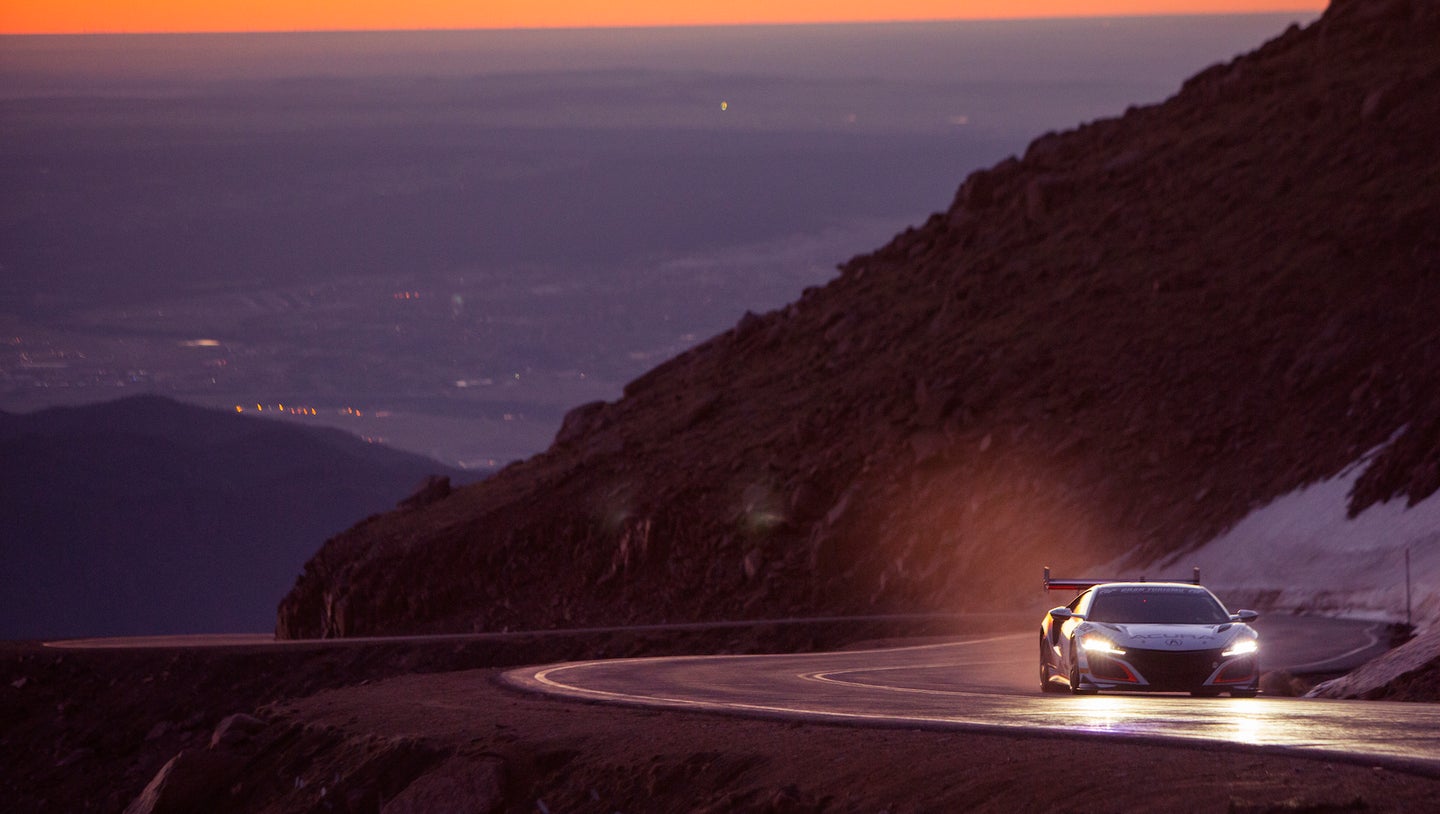 I consider myself to be a hardcore racing fan. I've attended lots of races in my life and witnessed my fair share of nail-biting moments, inch-perfect passes, and tear-jerking victories. I've also witnessed more crashes than I've wanted to, including some that claimed driver and spectator lives. However, until last week, there was one race that I hadn't checked off my motor racing bucket list: the Pikes Peak International Hill Climb. And now, after witnessing its savagery from up close, I can confidently say that the race to the 14,115-foot summit is the wildest and most dangerous in America.

I had an idea of what Pikes Peak was all about; how the dirt road was now paved and how last names like Unser, Millen, Dunne and most recently Dumas had earned the title of "King of the Mountain." What I didn't know, however, was the cojones it took to stare at a violent-looking, snow-capped mountain and say: "Yeah, I want to drive a race car (or motorcycle) on you at 150 miles per hour." Of course, I still don't know what that's like, but I did get to hang out with folks who do.

Acura invited me to Colorado Springs, Colorado to hang out with its team of racing drivers and engineers as they prepared to compete in the 97th edition of the International Hill Climb. Interestingly enough, Acura didn't just have racers and engineers, but actual engineers racing the creations they helped develop and, er, engineer. Think of it as your company's employee softball league, but much, much cooler.

24 Hours Before the Race

It was 9 a.m. the day before the race, and I found myself at the entrance of Pike National Forest sitting behind the wheel of a 2019 Acura RDX. Directly in front of me was the official Acura NSX pace car driven that day by Peter Cunningham, one of the biggest names in sports car racing and the owner of RealTime Racing. Behind me—and I mean literally behind me, as in my backseat—were Steven Olona and Jordan Guitar, two Acura engineers who had been hand-picked to race in 2019. Olona and Guitar were going to be my backseat drivers as I made my way through the 12.42-mile race course.

"Oh crap!" I shouted after a massive buck ran across the road not even 20 seconds after crossing the starting line. "Welcome to Pikes Peak," said a voice from the backseat. I don't know who had said it, but I do know that I didn't care at the time because I was internally crapping my pants. As we progressed through the course, the semi-professional racers explained how the RDX I was driving differed from the race-prepped RDX and MDX SUVs they were piloting during the race, while also sharing advice from their own experiences behind the wheel.

Trees eventually disappeared and car-sized boulders and heavy snow began to line the road. And to the right, never-ending precipices. The temperature, along with wind speed and direction changed immediately. To make matters even worse, someone figured guardrails simply weren't necessary.

After stopping at a few spots along the way to hear Cunningham and company's footnotes, we reached the summit and posed for photos at the 14,115-foot elevation marker. Despite the coffee and donut availability at the summit, I opted for a few good puffs of an oxygen canister instead. To say that my body was feeling the effects of the high altitude and lower oxygen levels was an understatement.

It was 5:30 a.m. and I found myself driving an Acura RDX into Pike National Forest once again. This time, however, I didn't have any special guests in the back. Those guys had arrived at the track hours prior and were already reviewing weather conditions and going over performance reports. An hour later I attended the world's shortest driver's meeting, which basically consisted of the race director telling everyone to be safe and keep the program moving, followed by the singing of the national anthem and a brief prayer. Just minutes after everyone said "Amen," the first motorcycle blasted through the starting line and up the mountain.

The next bike was supposed to follow three minutes later, but that didn't happen. It turns out this year's inaugural competitor was involved in a severe crash and had to be airlifted to a nearby hospital, causing a one-hour delay. I didn't know it at the time, but this would be the first of three crashes that would make me realize that Pikes Peak is the most dangerous race held on American soil.

I hiked a quarter-mile up the mountain during the delay and settled on a spot near a dangerous double-apex right-hander. Shortly thereafter I heard a loud and disturbing grinding coming from the left. I quickly moved toward the makeshift fence and realized a motorcycle and its fellow rider were sliding on the road, leaving a trail of debris and sparks behind. Both flew off the road and into the woods, with the rider avoiding several trees and catastrophic injuries. The motorcycle didn't enjoy the same luck, ricocheting off trees before coming to a complete stop. All I could see was a cloud of dirt, and all one-hundred or so spectators near me had gone silent. The only thing that could be heard was the motorcycle's safety siren, which had been triggered during the crash to help rescuers navigate the vast wilderness. I was on my feet and my stomach hurt, but all I could do was hope the rider was ok. After 30 minutes, he emerged fully conscious and wearing a neck brace. He was assisted to a safety vehicle and was hauled away. Everyone clapped. "Only a few more bikes to go," I thought. "Then the cars will run."

Eventually, the track was cleared and the motorcycles began running interrupted. Unlike the cars, motorcycles started from slowest to fastest, so the slowest qualifying bike ran first, and the fastest last. This meant that the 27th and final motorcycle was actually the fastest, and that honor belonged to veteran Carlin Dunne and his 2019 Ducati Streetfighter V4 Prototype.

I had spotted Dunne at the pits earlier that morning as he looked over a few details on his bike. I'd never met him but I had heard of him before. I knew he was one of the big names at Pikes Peak and that he was going for the all-out motorcycle record in 2019—a feat he had already accomplished in 2012 when he became the first motorcycle to deliver a sub-10-minute time.

Later on, I saw Dunne blast past the double-apex corner on his way to the summit. "Finally," I thought. I was anxious to see Dunne's time, but I was even more excited for the first car to run.

Suddenly, silence. "Crap, not again," I said to myself. What should've been a five, maybe 10-minute gap turned into an hour, then two, and finally word came down from the mountain—literally.  Dunne had suffered a big crash, not sure where, but it was bad. He had to be airlifted. The delay was prolonged because organizers had to wait on the helicopter to return from the hospital in case another racer needed its services.

Eventually, the first car took off, and then the second, and then Cunningham's Acura TLX GT rocketed by me, followed by two Acura NSXs—one stock and one modified. But then, Mother Nature had a change of heart and rain started coming down hard. Sadly, further up the mountain, that rain turned into hail and the race distance had to be shortened, which meant that my trusty backseat drivers Olona and Guitar were forced to run a shortened race in their respective Acuras. At the end of the day, Cunningham ran an impressive 9:24.433 and finished first in class and third overall. Olona and Guitar scored a fourth and sixth overall—a great result by all means but not exactly what they wanted.

Sadly, Dunne died a result of his crash, which reports claim happened just 20 yards away from the finish line. When I heard that, my mind immediately went back to the final corner, where a bumpy and patchy track surface rocked the RDX’s suspension the day before. I remembered one of the guys saying that spot had caused some open-wheelers to bottom out. I was shocked but not surprised.

My first trip to Pikes Peak was eye-opening and enlightening. It was a reminder that motor racing is still dangerous—and let me tell you—I live four miles away from the Indianapolis Motor Speedway, where 225-mph crashes are the norm.

Pikes Peak is in a league of its own in terms of skill level and danger. I'm fully convinced that Pikes Peak is America's Isle of Man—and that it's the most dangerous race on American soil.

Dunne was referred to as “King of the Mountain” after becoming the first motorcycle rider to dip below the 10-minute mark in 2012.

From pre-war racers to rally racing legends and even modified cargo vans, Pikes Peak is where it’s at if you dig vehicular variety.

One of the most loved racing tracks in the country was invaded by hundreds of race cars.