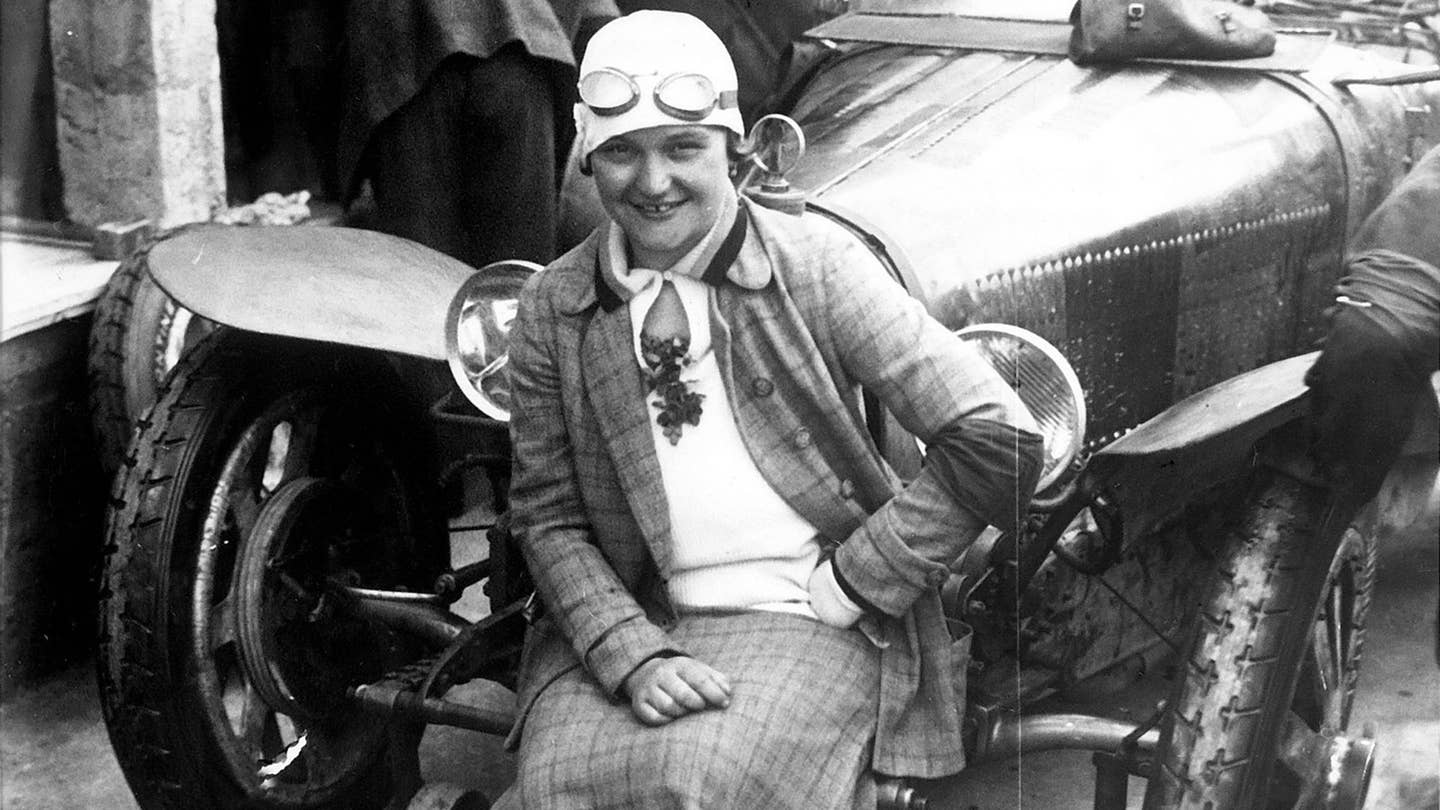 Don’t know the name Eliška Junková? Imagine Marie Curie, but with driving skill and a taste for racecars. Picture a diminutive woman arriving at the Bugatti factory in a 1922 Type 35B following a rainy, 378-mile drive from Prague and announcing to a line of astounded engineers that her car needed service. Know that once, at the 1928 Targa Florio, she finished fifth, beating famous drivers like Luigi Fagioli, Ernesto Maserati and Tazio Nuvolari despite major engine troubles. For a couple of laps, she had the lead, showing the rear of her Bugatti to even Bugatti’s own factory driver, Louis Chiron.

Though Eliška Junková, better known as Elizabeth Junek, gained fame as a jet-setting Grand Prix driver with a closet full of furs, but began life as the daughter of a blacksmith, one of eight. After WWI, she took a job as a bank teller at the Prague Credit Bank, where she wowed her employer with fluency in three languages. There, she met her husband, Vincenc “Cenec” Junek, a young banker with a taste for petrol-based shenanigans. In 1922, Eliška and Cenec married in Paris; within a few months, having earned enough to pursue racing, the pair won the Zbraslav-Jíloviště hillclimb, their first race. He drove, she served as a riding mechanic—racecars in those days, even the good ones, were so unreliable as to require constant repairs.

Bitten by the racing bug, and having turned her formidable intellect to the intricacies of auto repair, Eliška was primed to take to the track. After an old war injury of Cenec’s began to inhibit his ability to quickly shift gears, his wife took over the driving. In 1923, she completed her first professional race and, in 1924, won the touring car division of Switzerland’s Lochotín-Třemošná, after which she became a racing circuit celebrity. While male competitors made the expected cracks at her expense, implying she might not have the strength or the grit to compete, Eliška quietly deployed her immense technical prowess and rigorous preparation to become an ace driver. Before competing in the 1927 Targa Florio, Eliška initiated the now-standard practice of walking the race course, checking for roadway imperfections and plotting the perfect line.

Eliška’s glory years would be few: In 1928, just after trading driving duties with her husband during the German Grand Prix, he crashed and was killed. Overwhelmed by his death, the winningest female driver of the day sold her two Bugattis and Mercedes and retired from racing. She never again took the wheel, despite living to a healthy 93-years old. Celebrate her success, and remember her lasting influence on racing, with a print. You don’t need a lumberjack’s forearms to win the day; sometimes, wit and analysis, plus a rorty, sun yellow Bugatti, are enough.

A DUI, a 100-mph arrest… the second sex had a holiday weekend to forget.