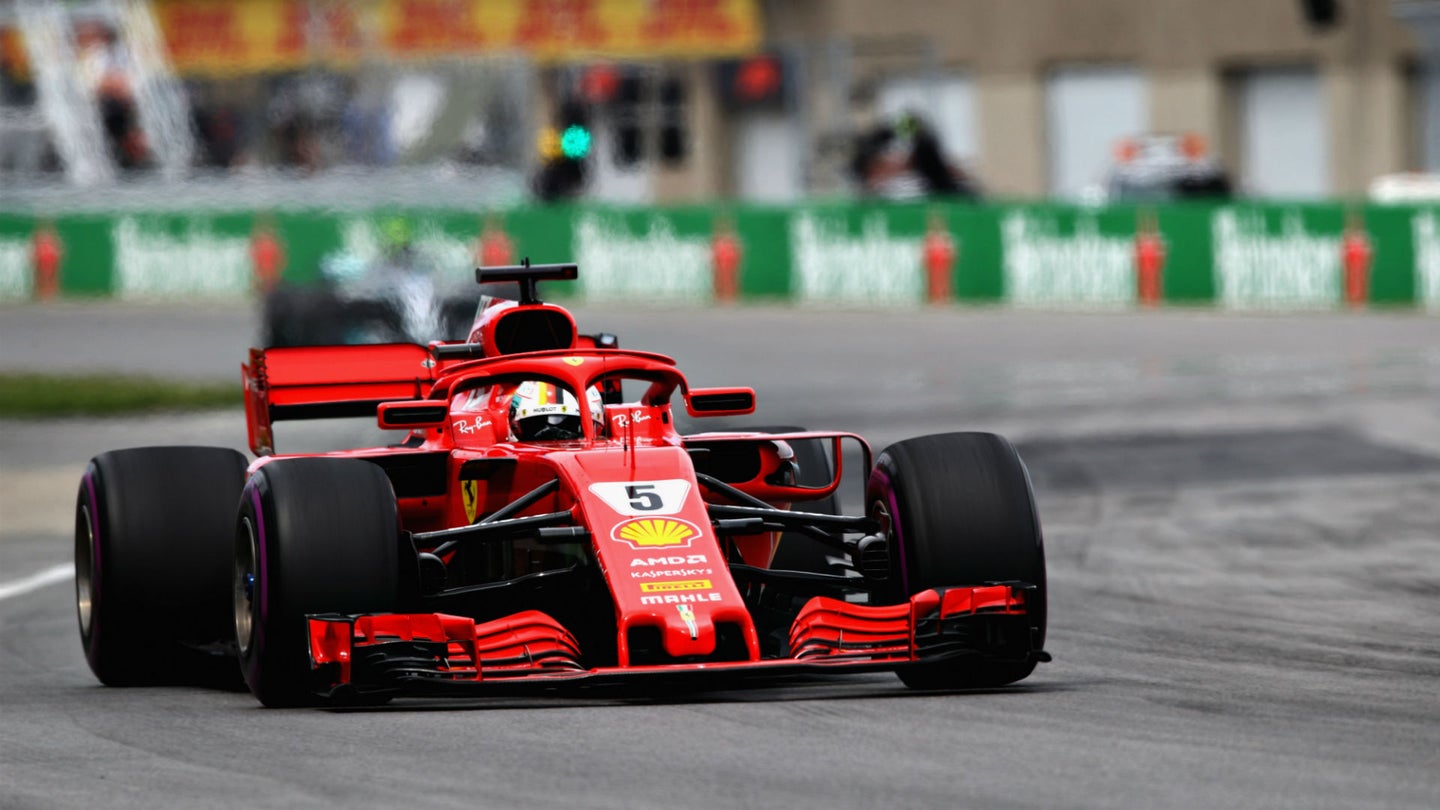 Sebastian Vettel claimed victory for Ferrari at Sunday's Canadian Grand Prix for the first time since the great Michael Schumacher did so in 2004. Starting from pole, the German led all 70 laps of the race in Montreal, fending off efforts from Mercedes' Valtteri Bottas for the 50th GP win of his career.

Upon race start, the field of 20 defended their position into Turn 1, remaining crash-free up to Turn 6 where Toro Rosso's Brendon Hartley collided with Lance Stroll of Williams. Hearsay claims that Stroll suffered a puncture shortly before the incident which could have had something to do with Hartley being squeezed in; regardless, the two retired without completing the first lap. No other cars were damaged as a result, but the delay in action brought tensions to a rise under the safety car.

The green flag waved on Lap 4 as Vettel began to construct a gap between himself and Bottas. A minor incident with Renault's Carlos Sainz and Force India's Sergio Perez forced the latter off-track but was deemed accidental, and going on, the field started to separate itself. The running order of Vettel, Bottas, Kimi Raikkonen, and Max Verstappen was maintained while the midfield was trading places in the shadows.

Teams showed their hand in terms of race strategy early on with several drivers pitting for the lowest grip and wear tire option available, Pirelli's supersoft, on Lap 10. Meanwhile, on track, Fernando Alonso stalked Alfa Romeo Sauber rookie Charles Leclerc for P10, the Spaniard showing his experience in the braking zones while shuffling behind the Ferrari junior.

At the front of the field, Vettel had lengthened his lead over Bottas to four seconds.

Daniel Ricciardo, who started on hypersoft tires along with Red Bull teammate Verstappen, pitted to swap out for supersofts on Lap 18. The Monaco GP-winner was able to exit pitlane in front of Hamilton thanks to a healthy gap over the four-time champion beforehand, pleasing Team Principal Christian Horner in the booth.

By Lap 30, nearly everyone on the circuit aside from the top three had stopped for fresh Pirellis. This initially changed with Raikkonen entering the pits on Lap 33, followed by both Bottas and Vettel four laps later. The rivals maintained their battle at the front of the field, though the Ferrari driver was able to display his advantage on the supersoft compound.

Varying track temperatures began to factor in as they registered at 105 degrees Fahrenheit before the start, dropping by 10 degrees at the halfway point. Still, drivers had to manage their brakes as Montreal upheld its reputation as the most demanding braking circuit on the schedule.

Fernando Alonso had been piloting his McLaren-Renault exceptionally well to Lap 42 where, despite his perseverance, he retired due to an exhaust failure. Unfortunately for Fernando, his 300th Grand Prix weekend was capped off with an all too familiar retirement at the Circuit Gilles Villeneuve.

Panning back to the No. 5 entry from Maranello, Vettel was being outpaced by Bottas although he held the lead through a tough three-lap stretch where his Mercedes competitor was lapping three seconds quicker around the demanding course. Just as Bottas' chances at a P1 spot began to show, he ran off-track and lost the time he had gained in the last handful of laps and sank down to a surely-unsatisfying second place.

Vettel, in turn, was gifted a cushion to cruise towards victory as he commandeered the championship lead from Lewis Hamilton. His third victory of the 2018 season provided him the 25 points needed to nab the top spot as he and Hamilton both pursue their fifth-career Drivers' Title.

A small tweak made all the difference for the Ferrari driver in a tense battle for pole with Mercedes and Red Bull.

One-tenth of a second separated the top four finishers in FP3.