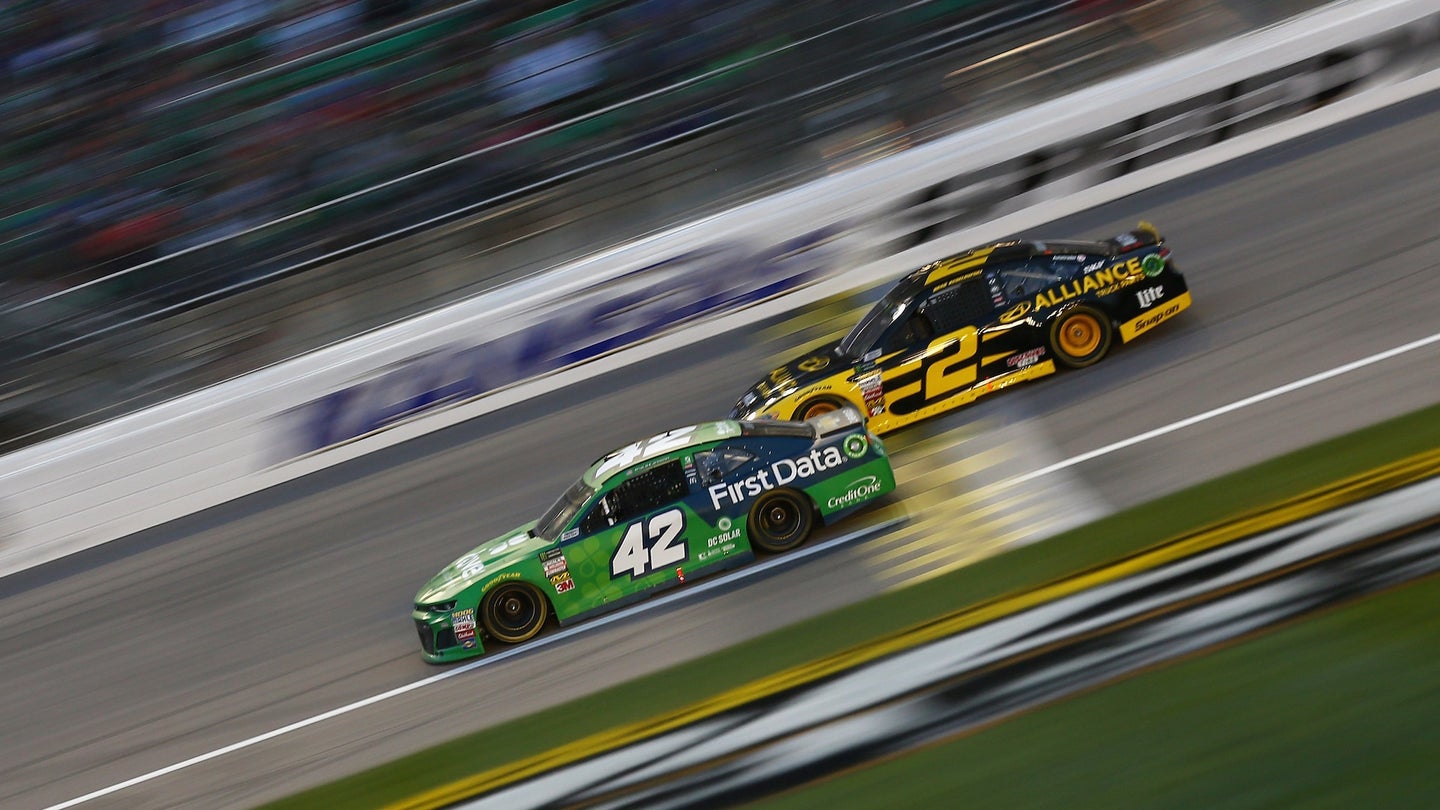 Kyle Larson and his No. 42 Chip Ganassi Racing team were penalized by NASCAR as a result of a rear-window dent in their car in the KC Masterpiece 400 at Kansas Speedway on Saturday night. NASCAR announced fines, a suspension, and points deduction Tuesday afternoon after the car underwent a thorough post-race inspection at the sanctioning body's Research & Development Center in Concord, N.C.

Car chief David Bryant was suspended from the next two Cup Series points-paying race, beginning with the Coca-Cola 600 at Charlotte Motor Speedway on May 27. Also, crew chief Chad Johnston was fined $50,000 while Larson and the race team were docked 20 driver and car owner points.

Section 20.4.8.1.b&c of the 2018 NASCAR rule book calls for window support braces that "keep the rear window of a race car rigid in all directions at all times.” Larson’s team isn’t the first to be penalized for an infraction of the same rule. The No. 4 Stewart-Haas Racing car of Kevin Harvick was found in violation of the rule after Harvick won at Las Vegas Motor Speedway in March. The No. 14 SHR entry of Clint Bowyer and the No. 9 Hendrick Motorsports car of Chase Elliott also have been in violation of the rule at different points in the season. Larson’s penalty mirrors those of previous violators of the rule, but NASCAR Senior Vice President of Competition Scott Miller told Dave Moody on SiriusXM NASCAR Radios “SiriusXM Speedway” show Tuesday that NASCAR would issue harsher penalties for rear-window fractions from now on.

The violation is classified as L1 on NASCAR penalty structure, modified ahead of the 2017 race season. The maximum penalties for an L1 rules infractions include three-race suspensions, $75,000 in fines, and 40-point deductions.

After the race, Larson attributed the rear-window issue to damage sustained in a late-race on-track incident with Ryan Blaney.

Larson finished fourth and led 101 of the 267 laps that made up the KC Masterpiece 400 after starting the race in the back.

One other NASCAR penalty was announced after the Kansas race. Todd Gordon, crew chief on the No. 2 Team Penske team of Brad Keselowski was fined $10,000 because not all lug nuts were properly installed on the car late in the race.