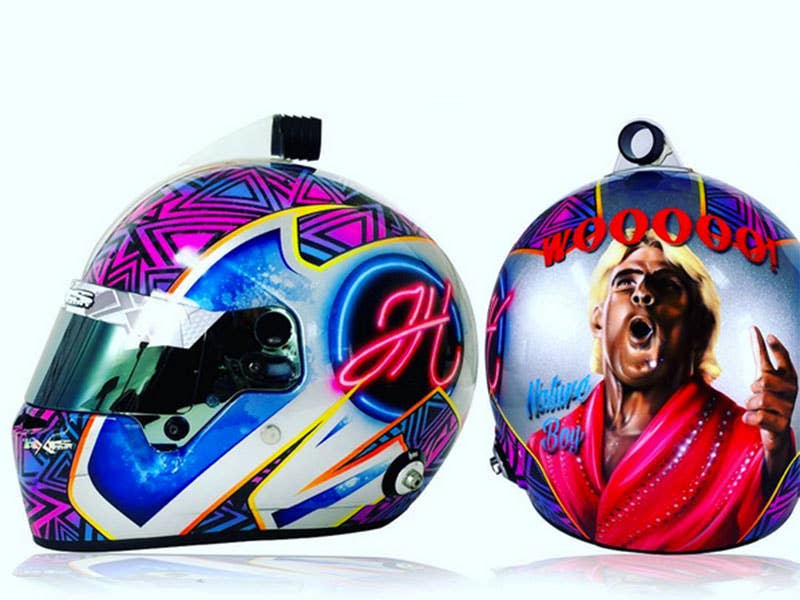 When NASCAR Camping World Truck Series driver John Hunter Nemechek was born, “Nature Boy” Ric Flair’s professional wrestling career was winding down. But that didn’t stop the 18-year-old driver, who snagged his first top podium spot last year at Chicagoland Speedway, from emblazoning his helmet with a heap of Eighties neon and a custom image of the WWF superstar. Does the design look like it’s from that ramshackle airbrush store that’s constantly moving locations at your local mall? Damn right it does. Does that make it more awesome? Indeed.

Nemechek’s never met Flair. He’s only heard his father idolize the 16-time world heavyweight champion. “Pretty much everyone [in their shop] is a big Ric Flair fan,” he tells NBC Sports NASCAR Talk. Nemechek’s hoping that an homage to Flair, a strutting, striding, ass kickin’, pile drivin’, 64-year-old bag of bleached hair and loose skin, will impart some luck during his 2016 season, which kicks off later this month at Daytona. “We’re hoping to get [Flair] out to a race at one point,” Nemechek added.

Best of luck, John Hunter Nemechek, and godspeed. Just remember: To be the man, you gotta beat the man. WOOOOOOO!

My, how you’ve grown.

The Motorcycle Helmet Gadget to Replace All Others

Drive Wire: The Forcite Helmet Is a Must for Extreme Sports