Kevin Harvick set an official track record at Fontana recording a 189.066 mph lap on Friday, but can he win his fourth consecutive race this season? 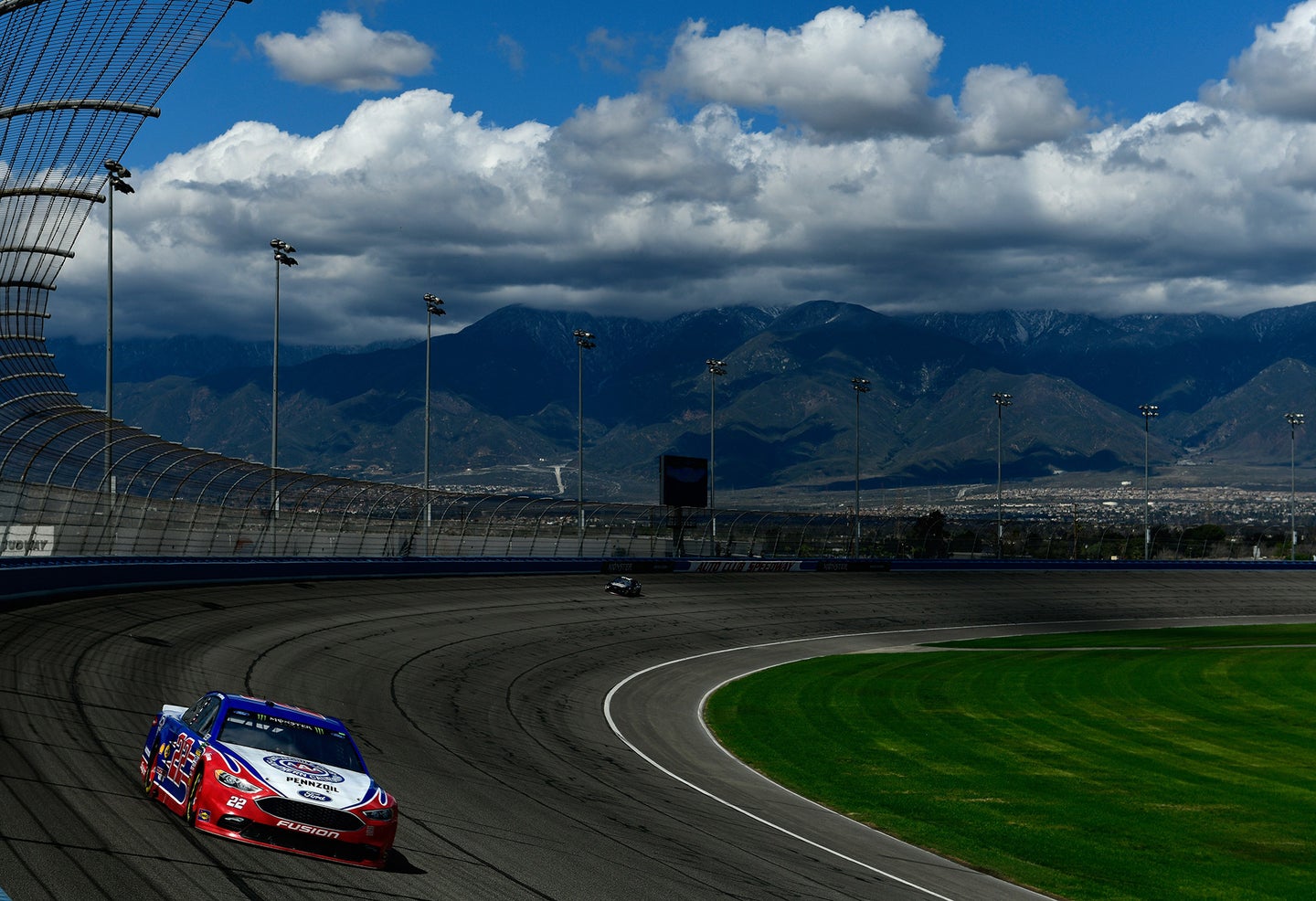 Stock car racing is still out West and the next stop is Hollywood—sort of. NASCAR is preparing for the final stop on its NASCAR Goes West tour by rolling into the Auto Club Speedway for a fast 400 miles in Fontana, just outside the glitz and glam of Los Angeles, California. The weather hasn’t exactly been ideal for NASCAR’s West Coast swing with frigid temperatures in Las Vegas and rain in Phoenix, but things are heating up in Fontana thanks to Kevin Harvick.

Harvick won his third consecutive Monster Energy NASCAR Cup race of the season last week at ISM Raceway. Showing no signs that he is ready to slow down, Harvick set an official track record at the Auto Club Speedway on Friday during practice recording a 189.066 mile per hour lap. He broke the previous record of 188.511 mph set in a qualifying session by Denny Hamlin in 2016.

While many are asking if Harvick can win his fourth consecutive race, NASCAR fans and analysts are wondering why so many drivers failed to clear tech inspection during Saturday’s Cup qualifying. Martin Truex Jr. went out and captured the Auto Club 400 pole for the second consecutive week, but all talk was on the thirteen cup teams that didn’t make it out on the track to run a lap to qualify.

Below are all the details on who qualified, who didn’t run a lap in qualifying, the starting line-up, and some other notable information you need to know about the Cup race at the Auto Club Speedway.

Past 10 Winners at the Auto Club Speedway

Getting through tech inspection proved to be harder than crossing the finish line in first place over the weekend. The thirteen drivers that did not pass inspection before qualifying include Kasey Kahne, Timmy Hill, Cole Whitt, Ross Chastain, AJ Allmendinger, Daniel Suarez, Denny Hamlin, Clint Bowyer, Aric Almirola, Alex Bowman, William Byron, Chase Elliott, and Jimmie Johnson. Worth noting, the entire Hendrick Motorsports team did not qualify, while two team members from both Joe Gibbs Racing and the Stewart-Hass team also had to sit out of qualifying due to failing inspection. If NASCAR can get by without making changes to the current way inspection are done remains to be seen. Kyle Busch, who will start second from the first row was quoted as saying, "This is a whole new system…You've got to give them a little more time." Although 13 cars failed tech, all 37 car entries for the race at the Auto Club Speedway will line up and take the green flag on Sunday.

Martin Truex Jr., driver of the No. 78 Furniture Row Racing Toyota, sits on the newly named “Busch Pole Award,” but can he get his first win at the Auto Club Speedway on Sunday? Names floating around for the win in Fontana include California native Kyle Larson, Joe Gibbs Racing driver Kyle Busch, and, of course, the man in the No. 4, Kevin Harvick.

Larson is no stranger to winning at the Auto Club Speedway. In 2017, he swept the weekend by winning both the Xfinity and Cup races. He will start from the second row in the third position on Sunday.

Kyle Busch is a three-time Cup winner and a six-time Xfinity Series winner at the Auto Club Speedway. He also won the last two Camping World Truck Series races at the Speedway in 2008 and 2009. His last Cup win at the track was in 2014.

We know Harvick, who is starting 10th, will be going for his 4th straight victory. We have also witnessed that whenever he has a grouse with the governing body that is NASCAR or is disgruntled in any way, he tends to let his performance on the track speak for itself. Similarly, after receiving the penalty before going out and winning in Phoenix last week, will he step up again this week? The Stewart-Haas Racing driver voiced his concerns about the way failed inspections were handled this week. Harvick said, "It’ll be interesting to start the race." He also went on to add: "You’ve got all the cars with penalties all on brand-new tires, so you’re penalized because you’re out here and went through tech and qualified good at the start of the race, so we’ll have to manage through that."

What About Jimmie Johnson?

One driver that is seemingly being overlooked is Jimmie Johnson. It was recently announced that his long-time sponsor Lowe’s will not be back as the primary sponsor for the No. 48 Chevrolet, but nonetheless, Johnson remains optimistic stating that “the desire to keep racing is absolutely there.” He did not run a qualifying lap due to failing inspection on Saturday, but we shouldn’t count the oldest driver at Hendrick Motorsports out. At 42 years old with 7 championships under his belt, at some point he should return to his winning ways—and let’s not forget that Johnson is a six-time winner at the Auto Club Speedway.

Scenes From The NASCAR TicketGuardian 500 In Phoenix

NASCAR ran their Spring Phoenix race at ISM Raceway last weekend, and we were there, cameras in hand.