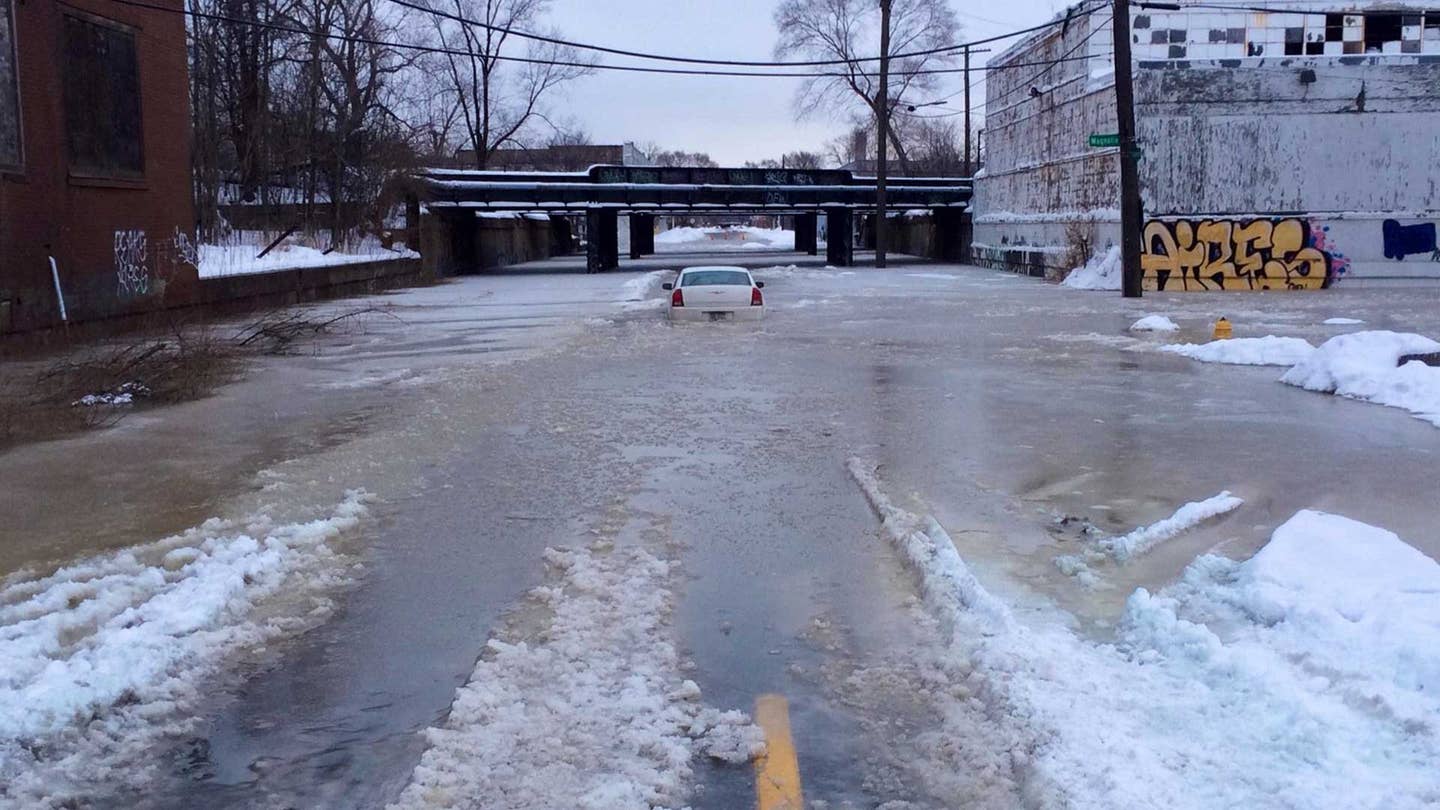 There’s no real suspense in this pageant, and no Steve Harvey to screw it up, so let’s open the envelope: The award for America’s Worst Winter Driving City goes to… Detroit!

Bitter temperatures. Grim surroundings. Potholes upon potholes, another testament to the urban indifference of Republican Governor Rick Snyder, whose skinflint policies helped poison Flint’s water system. And, of course, snow and slush and that nasty stuff in between, like a dentist’s sandblaster aimed at your eyeballs. Forget your Pittsburghs, your Chicagos, even a Buffalo whose 94.7 inches of average snowfall doubles the annual dump on Motown. Detroit is the worst place you’ll ever run your defroster, from the antiquated, wagon-wheel layout of downtown streets to ravaged neighborhoods locked in the snow globe of your nightmares.

I spent years wandering the industrial Narnia of Detroit, locked in what seemed a 100-year-winter. And not in some awesome White Witch sleigh, but instead shit cars that froze and rusted, broke and crashed. I probably should’ve died when my AMC Gremlin succumbed to the cold, forcing me to walk miles with no coat to find help. But Detroiters are tough, proud of their imperviousness to winter, and we made the best of it.

Ever seen New Yorkers in January? Watched them confounded at the first snowflake, bunching up like subway cars and refusing to top 15 mph. One big storm a year gets people moaning like they’re prisoners in the Siberian gulag. They’ll get no pity from this Brooklynite: We live in New York, people. There’s a subway to fall back on, great restaurants and bars on every block to duck into, and bicycle men who’ll brave any storm to deliver takeout, groceries, dry cleaning, even liquor. Liquor!

Boston does nip Detroit for annual snowfall, and set a new high—or low—with 108.6 inches last winter. (Detroit broke its own 133-year-old mark with 94.9 inches in the winter of 2013-2014). But again, please: Boston is a relative Christmas storybook, the place where Ali MacGraw and Ryan O’Neal made snow angels, for chrissakes. If those two lovebirds built a snowman in Detroit, it’d come to life and steal their wallets. Plus, Boston has the Patriots, always good for a wintertime pick-me-up. Detroit has the Lions, which are only good for a nip from the flask.

Boston is a Christmas storybook, the place Ali MacGraw and Ryan O’Neal made snow angels. If those two lovebirds built a snowman in Detroit, it’d come to life and steal their wallets.

The daily Beltway jams that choke Washington D.C. make Detroit seem as wide-open as the prairie. But, last week’s blizzard notwithstanding, Washington, D.C. usually avoids going all Ice Station Zebra, so no dice. And that goes double for traffic-choked Atlanta. Just because a light dusting turns an entire populace into Weebles, sending scores of cars wobbling into the nearest ditch, doesn’t grant them a white-knuckle trophy.

As for mountain towns from Utah to Montana… are you kidding me? For one, the powdered-sugar drifts and Rocky Mountain High roads are way too beautiful to complain about, not least for hunky ski bums and snow bunnies. Detroit is flatter than roadkill. It has more unrelieved gray than a Ft. Myers barber shop. The dingy blanket of clouds roll in off the Great Lakes by Thanksgiving, a veritable Snuggie of seasonal depression that often extends into April.

And in those Rockies, winter road preparedness rises to arctic warfare levels, as I realized on my first-ever morning in Vail years ago. Assuming the 18 inches of overnight snow had paralyzed the region, I jumped into a Jeep Wrangler to discover pavement so spiffy, so bone-dry, the road crews could’ve been armed with Shop Vacs. In sad contrast, side streets in many Motown neighborhoods go entire seasons without seeing a plow. Not that they were easy to spot: Until a recent $185 million, post-bankruptcy infusion of LED lighting, Detroit resembled a horror scene from 30 Days of Night. Up to 40 percent of streetlights were out of commission on any given evening, plunging neighborhoods into darkness.

Instead of plows, Detroit prefers to spew sodium chloride on its streets. Not surprising given its location atop a subterranean city of salt, a now-shuttered mine 1,200 feet below the city—including Dearborn, Henry Ford’s birthplace and the company’s headquarters—with 100 miles of underground roads. Which I can only imagine are superior to the above-ground variety.

If a tiebreaker is required, try this: Detroit’s more-foresaken nabes resemble the Wild West, or perhaps the Middle East. It’s mayhem. As kids, we’d bumper hitch, sneak behind unsuspecting cars at stop signs and grab on, then ski behind for as long as we could dare. Or pelt passing cars with snowballs. Stop signs and red lights are mere suggestions in Detroit. Cars sail through intersections year-round, but especially during winter, when slowing down could mean getting stuck. Or worse.

Really, in this winter pageant, it’s no contest. Uncongenial, shabbily dressed, tottering on ice in streetwalker heels, Detroit is America’s worst winter driving town. Take a victory walk, Miss Motown, raise your diamond-crusted scraper high. And hang in there, Detroiters. Spring is only a few months away.