An Austrian teen crashed a Tesla, causing it to burst into flames. 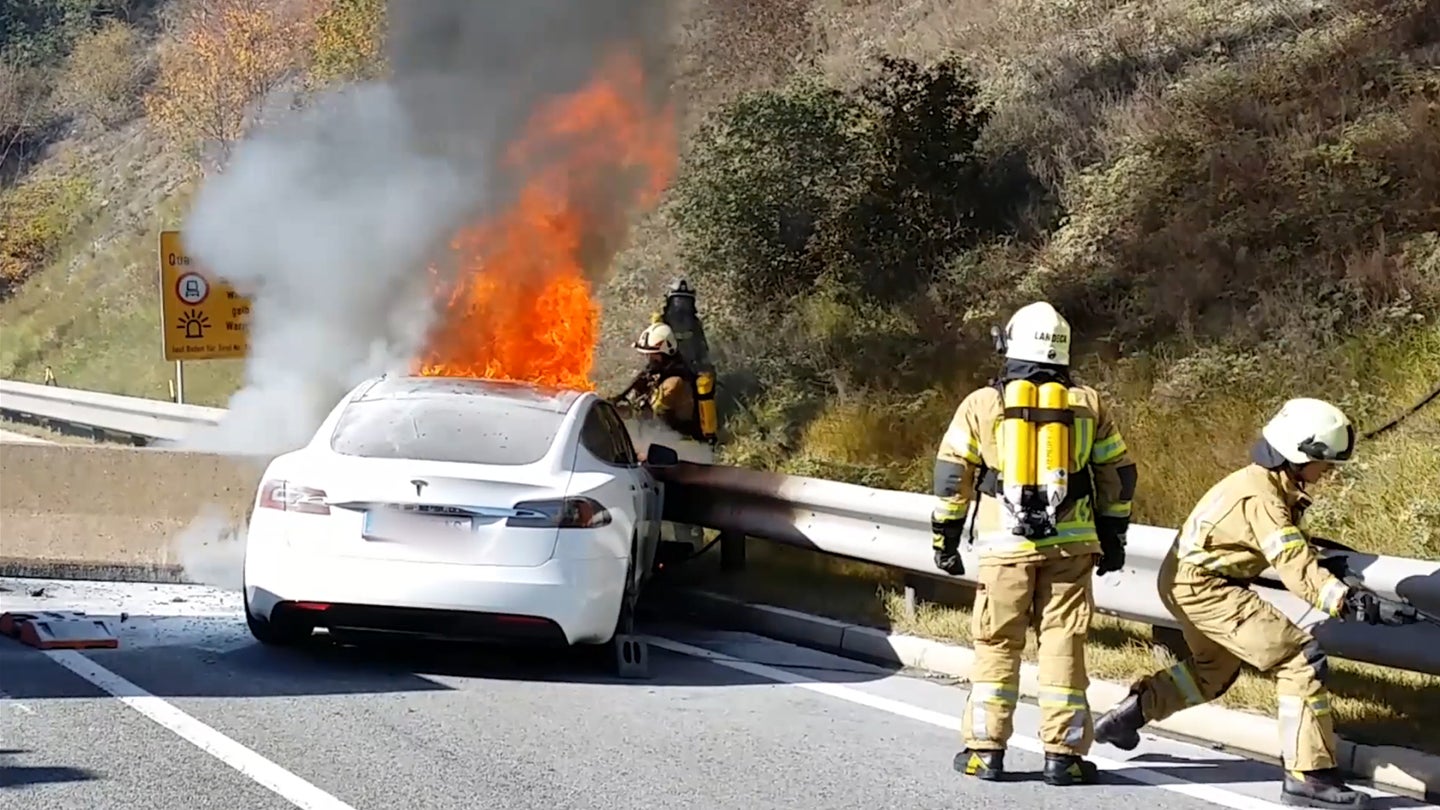 More than 35 firefighters responded to a Tesla Model S catching fire earlier this week, according to an Austrian news site. The accident, which occurred in Pains, Austria on the S16 highway, was caused by a 19-year-old driver who lost control of her car in a construction zone. As a result of the impact with a concrete barrier, the Model S caught fire.

This isn't the first time an electric vehicle has caught fire and in a world where electric cars are becoming more popular than ever, and it won't be the last—no matter the manufacturer. Though the cause of this particular fire is unknown, the culprit in many scenarios is, surprisingly, the batteries themselves. We asked Tesla to confirm whether it has any knowledge regarding the cause of the fire in this particular scenario, but have not yet received a return comment.

Lithium-ion batteries are a fairly stable way to store energy and are utilized in everyday applications around the world, from cell phones to cars. However, when a Lithium-Ion battery becomes compromised, all hell can break loose. Things get very hot, very quickly, eventually catching fire if the situation is unable to be remedied.

In this case, there seems to be no official word from Tesla on whether the battery was the cause of the fire.

That said, automakers and battery manufacturers are aware of the inherent risks of lithium-based storage. In fact, it's far less likely for a fire to occur in a battery-powered car than a traditional car which runs on gasoline. The caveat still remains that, although dangerous when things go wrong, these batteries store tons of energy. Manufacturers like Samsung have achieved such dense energy storage plans to mass-produce batteries for the influx of electric cars that are becoming a key role in everyday business. Until solid-state batteries become viable, lithium will likely reign supreme.

If a crash involving electric car batteries were to occur, how can one be sure that emergency workers know how to handle such a situation?

Tesla has published guides for first responders to educate them on how to handle threats caused by batteries. The literature includes information regarding vehicle identification, disabling the high-voltage system, and even a guide on how to cut into the vehicle if a condition warrants emergency passenger removal. Thanks to specific knowledge from the fire department, the responders were able to sever the connection to the high voltage batteries and extinguish the fire. They have since placed the vehicle under "quarantine" for 48 hours, per Tesla's recommendation, to monitor the stability of the batteries.

Fortunately for the driver, emergency workers were prepared to handle the blaze, quickly bringing 35 individuals in five separate trucks to the scene to remedy the situation. Although the car was a total loss, the driver was able to be transported to the hospital and have her injuries examined.