Troubling signs for Tesla's quality control ahead of the Model 3 launch. 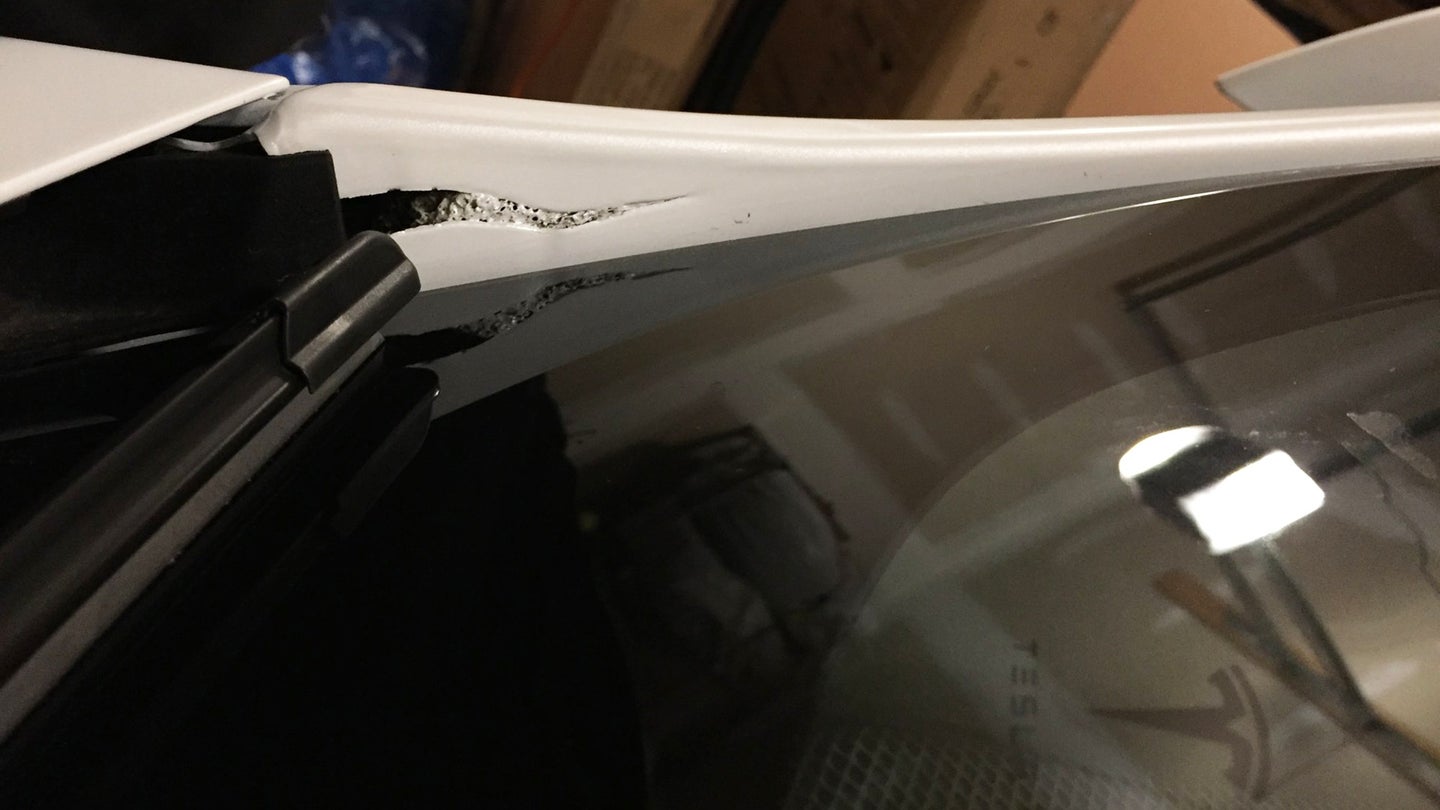 Tesla's stock may be flying high, but back down here on Earth it's clear the company is still dealing with some growing pains as it prepares for its biggest car launch yet in the Model 3. A Canadian man who took delivery of a brand new Model S 90D last Friday got a nasty surprise when he realized the car's A-pillar was structurally compromised by a huge crack that appears to have been painted over at the factory and passed through several quality checks on its way out the door. (UPDATE BELOW)

Matthew Cheung was understandably frustrated when his brother-in-law pointed out the defect a few days after delivery. The crack starts near the point where the passenger-side A-pillar meets the hood and widens as it extends 2.6 inches down out of sight. Distressingly, the exposed foam material inside is painted over, indicating the problem occurred somewhere early along in the manufacturing process, possibly during the stamping stage.

Cheung told The Drive that this was his first Tesla after following their progress for years, and though he remains supportive of the company, he's upset that he can't drive the brand new car he's been waiting for since last November.

"I can tolerate and to some extent expect some minor fit and finish issues with a new car company building innovative products as long as they'll fix it soon enough, but this is much more serious than what I've ever seen or read. I do genuinely hope it is a rare one-off, but it really requires some internal retrospective [from Tesla] on how it actually happened," he said.

What makes this issue so concerning is that the A-pillar on the Model S is actually part of a huge single-piece side panel, meaning the car would have to be half-disassembled to fix the problem. Other forum members debate over getting the damage repaired versus junking the car completely, but Cheung told us that driving a potentially defective vehicle "won't sit well" and he hopes the company will replace it. There's also the fact that the car would have to be serviced at a body shop certified by Tesla, of which there are only two in the Toronto area where Cheung lives - potentially adding more time to the whole process.

To Tesla's credit, they appear to be addressing the situation. Cheung told us that while the delivery employee was a little defensive about not spotting the defect and suggested they might not be able to offer him a loaner for "body work," the local and regional service managers have both been extremely communicative and are providing whatever updates they can. We reached out to Tesla, who gave us the following statement:

"We are committed to quality and to providing our customers with an outstanding experience. What happened in this situation is not how our vehicles are normally delivered. A mistake was made and we are working with our customer to ensure they are satisfied."

They're also very lucky to have a customer like Cheung on the receiving end of this issue. He says he "remain[s] supportive of their overall mission" and is thankful for all they've done to promote electric vehicles, and the Model S is still the only car he wants. But he adds that he'll be inspecting his replacement with a much closer eye, and he hopes they can sort out whatever manufacturing problem led to this in the first place before they plunge headfirst into production of the Model 3.

Individual Teslas have always been known for their... let's call them quirks, but this is a far more serious problem that they'll need to address before hitting their ambitious production goals in the next couple years. Niche markets can tolerate a few quality control issues, but the masses are far less forgiving.

UPDATE (5/21/2017): After more than a month and a half of negotiations, Cheung will be taking delivery of a brand new Model S in early July. Despite weighing a rebuild, Tesla decided to refund the price of the defective car and worked to offset the recent changes to their pricing structure so he could purchase a new one with a crack-free A-pillar. He also took the opportunity to upgrade to a 100D.

Overall, Cheung says he's "very pleased" with how the process played out and appreciates the responsiveness of Tesla's service team. It also doesn't hurt that he's been driving around in a P90DL loaner since early April.

"I am confident at this point that it will all work out," he told The Drive. "The only thing which could spoil my mood would be the release of the [next-generation] Model S with the Model 3 launch the day after I pick it up."