The hydrogen future might not be happening for automotive but this isn't the worst idea. 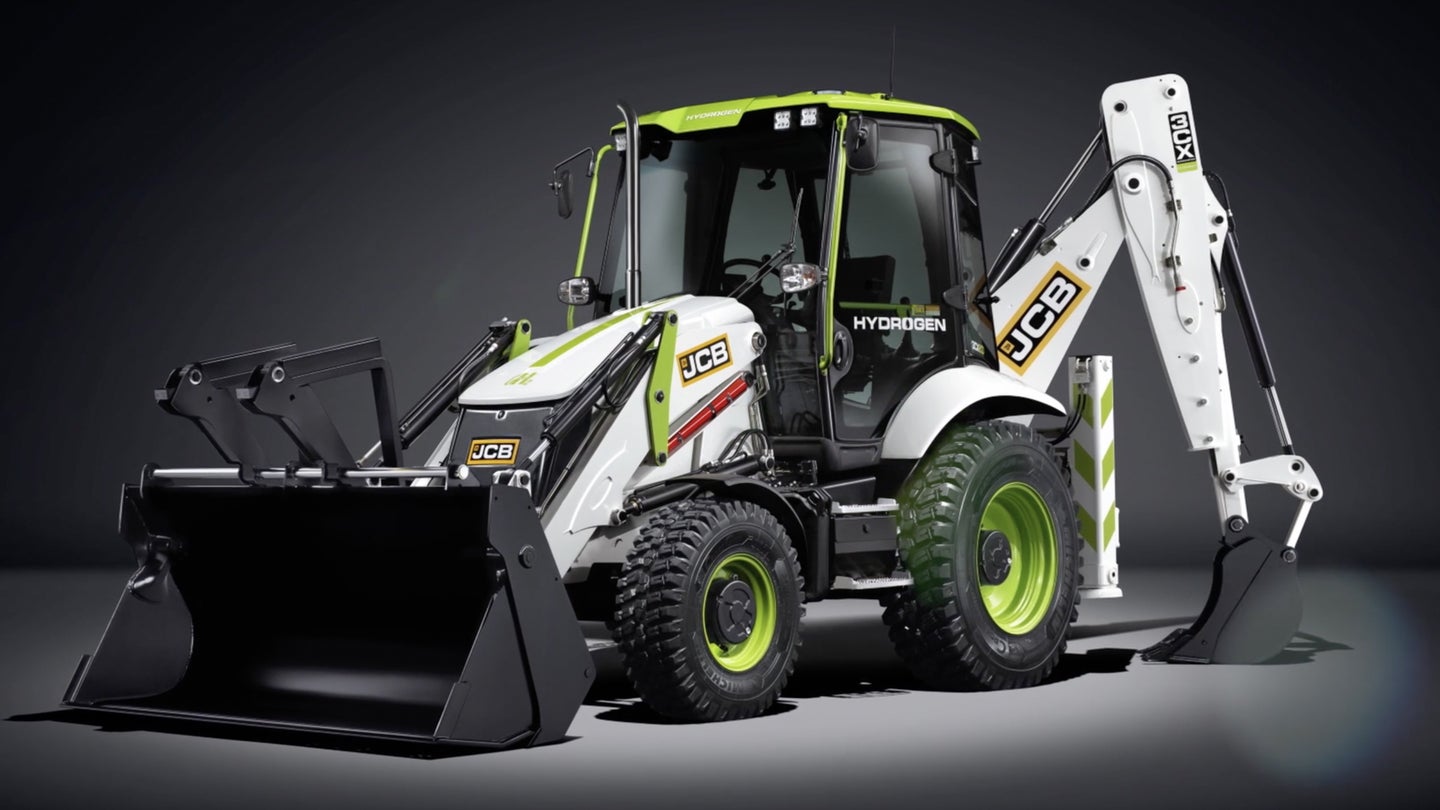 JCB makes, for the most part, extremely non-recreational equipment. Ok, sure, you can beat the crap out of a four-door at Diggerland if that's what you need to do but for the most part, these telehandlers and excavators are getting down to serious work in industries that have serious carbon cost issues. It might surprise you to know, then, that I ran into a couple in the parking lot of the Glasgow Science Centre on my way out of COP26, the United Nations' climate change conference.

Ambling over, I enquired what all this was. I'd assumed they were using fuel cells until closer inspection showed there were very definitely combustion engines in there. The adapted 542 and 532 lifters are switched up to have the capacity for carrying hydrogen tanks and have some changes made to their engines. Otherwise, they're pretty much the same as their traditionally field counterparts with no major chassis adaptations and no loss in lifting or shifting capacity.

Now, I gotta say, when I was chatting to the dudes from JCB about these things, I didn't know this was some sort of Tory-backed project. I probably should have since JCB is—unfortunately, in my opinion—a really big Tory party donor. It's the U.K. equivalent of throwing cash at the GOP—again, not the most COP26-friendly act but you know what, I don't think you need to let that spoil your enjoyment of some good diggers on this difficult-as-ever Monday.

I had a check of the 542 first since the engine was pretty much exposed. As you can see, it's not got anything wildly funky in there. The pistons in the combustion chambers, of course, had to be replaced to reflect the difference in hydrogen versus diesel combustion. But as with other hydrogen combustion conversions, it doesn't take a huge amount of radical work.

The other main difference is the fuel tanks, which do have to be accommodated in and around the chassis. For a vehicle very unlikely to have, say, a high-speed road collision, that's a bit less of a challenge than in a passenger car. The ultra-rigid tanks can be fixed externally to give extra capacity, as they were on the 542 I saw, or put safely into the chassis like on the 532.

One of the problems with hydrogen combustion is while its only chemical product is steam, if it burns hot enough, then it's just as subject to particulate emissions as any other engine. So you can eliminate CO2 as a byproduct of the engine function but not NOx—except that on a digger, the engine doesn't have to get ridiculously hot. It's never gonna work for a performance car but site vehicles were already having to look at keeping temperatures low for construction in urban areas, so if we're gonna use hydrogen as a combustion fuel, then they're a pretty good target.

The two I was shown produce only steam, I was assured—that's probably not quite true all the time but it'll be at least as clean as the absolute cleanest fossil fuel-powered diggers.

Anyway, who knows if it'll really ever be practical to get H2 to remote sites given the issues with transporting and storing it. JCB actually signed a multi-billion-dollar deal on Monday to import green hydrogen into the U.K. from Australia, which could help solve the problem. Producing it via electrolysis on location is likely the best solution as that would enable off-grid or difficult-to-access site work.

Got a beloved digger? Show me on hazel@thedrive.com