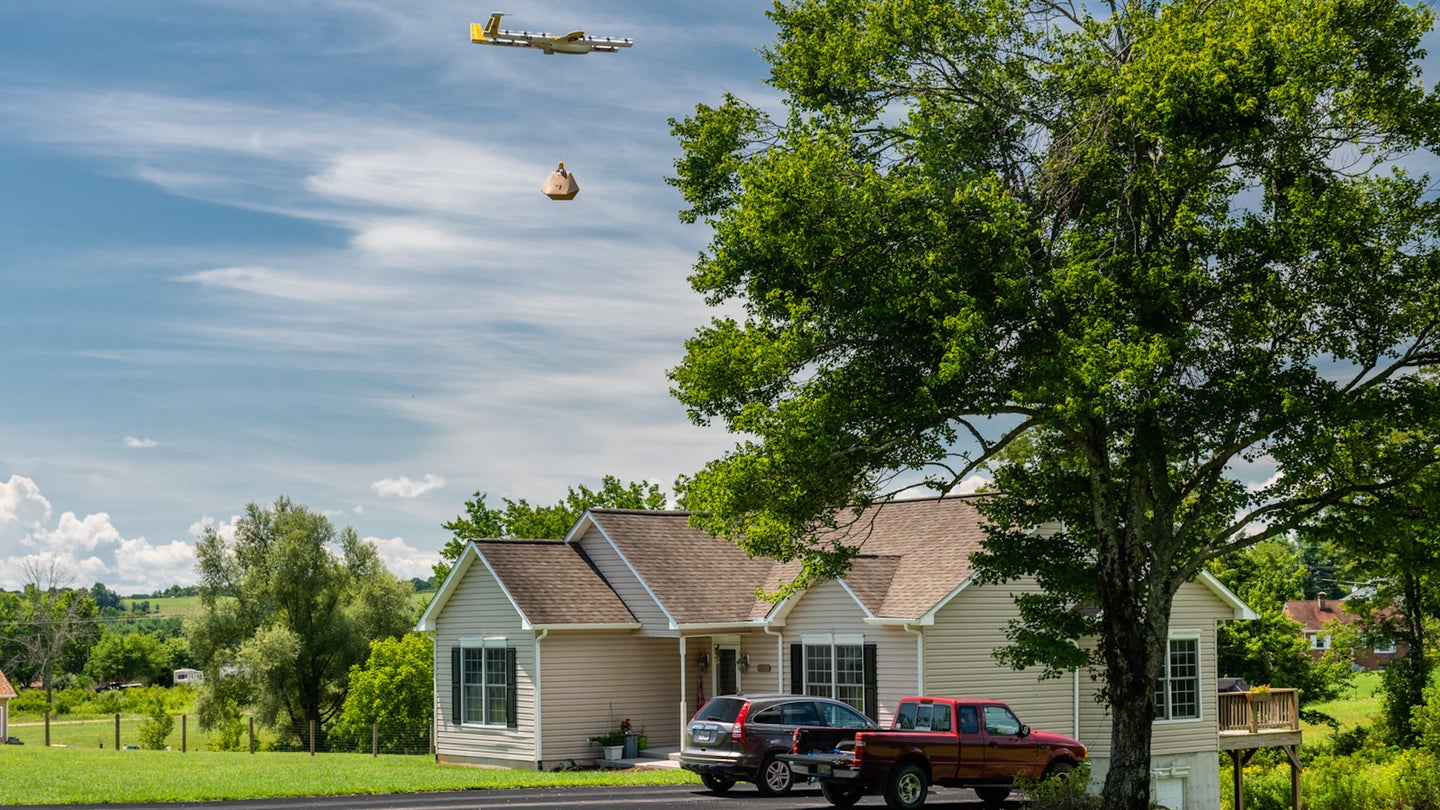 Google’s parent company, Alphabet Inc., recently deemed its Project Wing substantially advanced enough to graduate into its own, separate company. Wing has been testing aerial food delivery in the Australian suburbs for quite some time now, and according to Bloomberg, completed the first long-distance, residential drone delivery in the United States Tuesday. The payload? Ice cream.

In this historical first, Brianna Smith’s two-year-old son Jack received an aerial delivery of ice cream and a Popsicle, a mere six minutes after a Wing technician confirmed the order through the company’s smartphone app.

The United States is currently undergoing a substantial transition in managing a select group of drone companies to thoroughly test their operations in several states across the country. The loosened regulations of this UAS Integration Pilot Program allow for corporations like Microsoft, Flytrex, and Wing to conduct nighttime, above-crowd, and beyond visual line-of-sight (BVLOS) test flights to collect invaluable data regarding the state of secure unmanned aerial activities.

Wing’s BVLOS delivery in Blacksburg, Virginia marked the first long-distance, aerial mission in the United States. “Today we’re going to see what I’ve been preaching, how drones are going to change your daily experience,” said Mark Blanks, director of the Virginia Tech Mid-Atlantic Aviation Partnership, and a sponsor of Wing’s test program. “It works. I’m just excited to see deliveries in my neighborhood.”

While autonomous, nationwide drone deliveries have a long way to go before becoming ubiquitous, Wing’s successful mission is undoubtedly a landmark in the efforts to get there. The winding road toward standardization, of course, will require further, extensive testing, and the creation of thorough unmanned traffic management (UTM) systems to safely secure these proposed drone fleets simultaneously whirring across national airspace. Currently, however, we should cherish the technological and cultural achievement flawlessly achieved on Tuesday.

Wing’s Chief Executive Officer James Ryan Burgess said that the aerial delivery was novel for capably managing a lot of moving parts at once, such as the autonomous guidance system, a radio-identification beacon, and utilizing existing cellular networks for reliable tracking and communication between the unmanned aerial vehicle and the central command. The app used to place an order, too, is an in-house product that Wing intends to standardize for the public as soon as drone deliveries get the federal go-ahead. “It’s an exciting opportunity to build a whole ecosystem,” said Burgess.

As for public concerns regarding the potential invasion of privacy, or the safety of residents going about their daily routines as flying packages buzz above their heads, Blanks said the local community has been nothing but supportive, or at least indifferent. “I’ve gotten literally zero negative feedback,” he said. As chairman of the local Montgomery County Board of Supervisors, Chris Tuck largely echoed that sentiment, adding that while a few residents have certainly vocalized their concerns about this entirely new aerial delivery program, both the local government and the citizens arguably being affected by these tests are enthusiastic that their territory has become a hotspot for technological advancements.

The drone itself is a 12-rotor, vertical takeoff and landing (VTOL) drone that resembles the military’s Osprey drone, albeit much smaller. It’s essentially a fusion between your standard fixed-wing airplane and a mini helicopter, which is capable of flying long distances, and easily transitions into horizontal flight upon takeoff. Wing’s delivery drone reaches speeds of up to 85 mph, which allowed Tuesday’s delivery to conclude in one single minute. As for handing off the payload, the drone lowers its package on a tether, in order to most effectively avoid colliding with people or objects below.

Ultimately, Project Wing has come a long way, and it’s impressive to see the company reach this aerial delivery milestone so soon after graduating from Alphabet Inc. From delivering burritos to Australian suburbanites and successfully shooting off from its parent company, to completing the first long-distance, residential drone delivery in the U.S., Wing has certainly proven itself as a capable, independent entity. It’s only a matter of time before it sets yet another benchmark in the UAS industry, and we’re certainly excited to watch it get there.