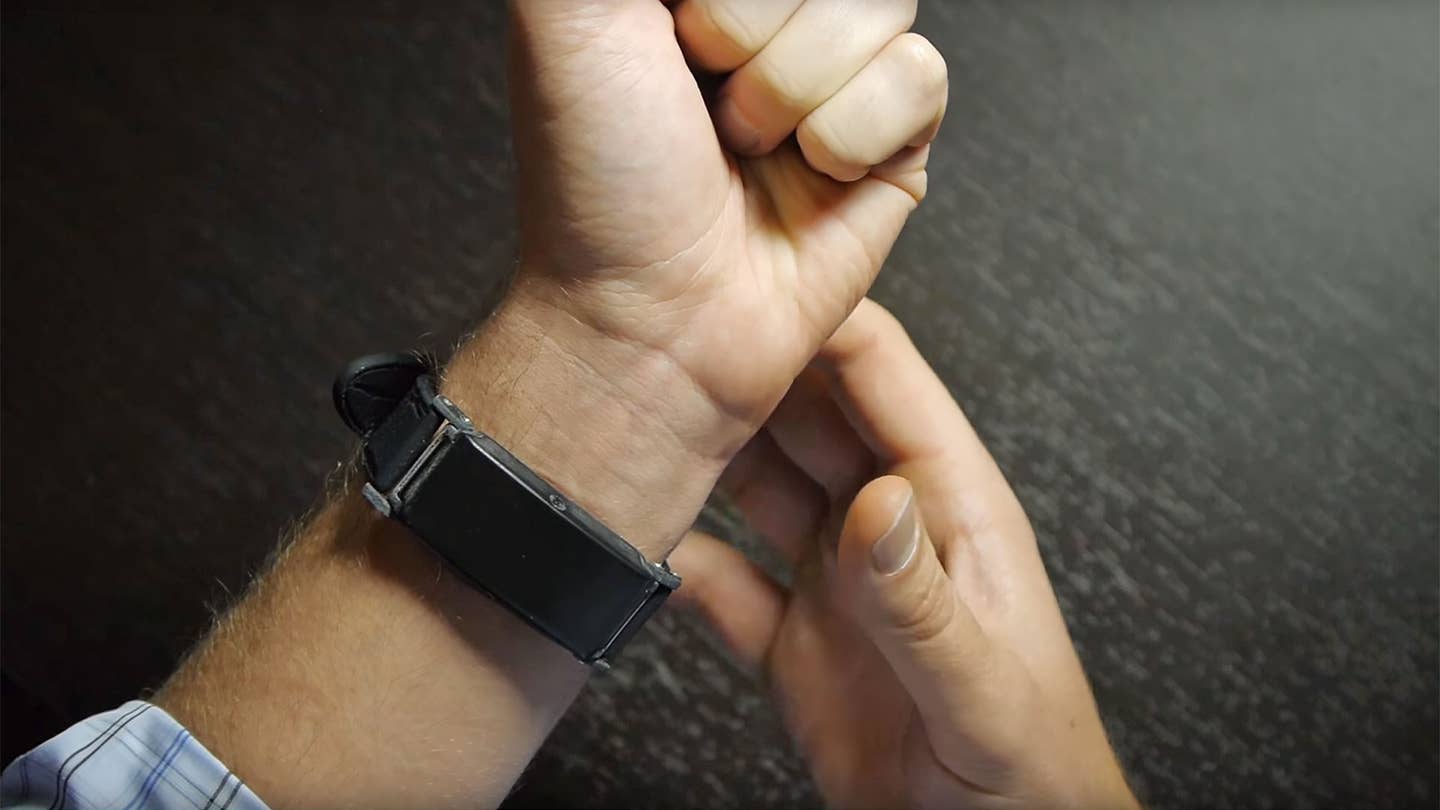 Kathy Jung, a program director at the National Institute on Alcohol Abuse and Alcoholism (NIAAA), said, “The field of alcohol biosensors has been plateaued for at least ten years. We wanted to attract new people to the field.” So last March the NIAAA kicked off its Wearable Biosensor Challenge, looking for a discreet, marketable device that could measure blood alcohol levels in near real-time. The contest attracted eight entries, with a bracelet called Skyn from breathalyzer maker BACtrack taking the $200,000 top prize.

The USB-rechargeable Skyn, which looks like a bulked-up Fitbit, hides an electrochemical sensor that measures the amount of ethanol emanating through the skin. Using a BACtrack algorithm, the sensor converts the transdermal ethanol molecule data into an estimate of the wearer’s blood alcohol concentration (BAC), and sends that numerical figure to an iOS app. We need to qualify the “real-time” component, though, because ethanol doesn’t begin emerging through the pores until 30 to 45 minutes after a person starts drinking. The BACtrack algorithm is the secret sauce that converts a snapshot from 45 minutes ago into a plausible estimate of a drinker’s current BAC. To test it, the NIAAA contest protocol used volunteers hooked up to an IV that fed alcohol directly into the bloodstream when the volunteer pressed a button. Institute scientists measured BAC with their own algorithms and administered breathalyzer tests for two hours, then compared the graphs of their in-house findings with the findings from the contestants’ devices. Said Jung, “What we liked about BACtrack was how nicely their data paralleled the breathalyzer data.”

That’s not exactly surprising seeing that the private, San Francisco-based company is a master of the BAC game. In business since 2001, it’s the top selling breathalyzer maker in the country, it sells breathalyzers to governments and consumers – including devices wirelessly integrated with smartphones, and its products have won awards everywhere from Popular Science to Car and Driver.

Because of the potential 45-minute delay, the Skyn won’t replace a traditional breathalyzer. However, by being able to track ethanol levels from once a second to every ten seconds, it does have other medical uses such as creating a savable, long-term record of alcohol usage. Anyone seeking treatment can give the doctor a scientific accounting of how much they’ve had to drink instead of self-reporting. The Skyn can also send alerts to the smartphone app to let a drinker know when he’s close to the legal limit or at a set BAC number, and it can send alerts to family and friends or call an Uber.

The NIAAA said the Skyn algorithm needs some tweaking, an engineering assignment BACtrack must already be working on since the company plans to offer a retail version by the end of the year. At some point that’s going to involve getting FDA marketing approval, but BACtrack is taking registrations now for a limited release. And based on the success of this first effort the NIAAA said it’s going to sponsor more alcohol biosensor projects, hoping to spur the creation of an inoffensive wearable that can provide genuine real-time BAC levels.