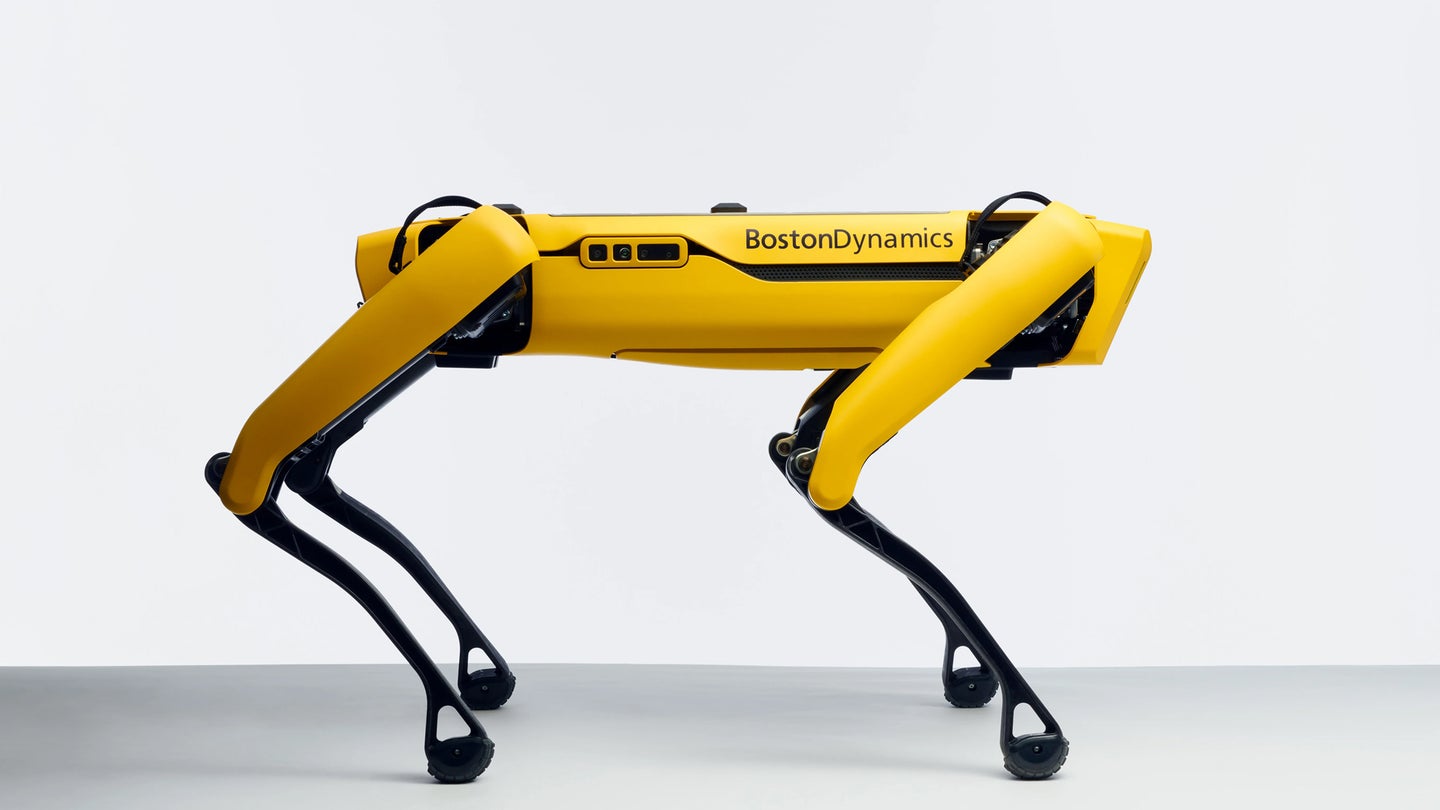 If you've been scrolling through social media endlessly over the course of the pandemic, you've most likely seen the yellow four-legged robot built by former Google

Alphabet-owned Boston Dynamics. This android has been the center of attention since a Boston Dynamics released a video of an early prototype more than 10 years ago, showing the world that it was possible for a robot to autonomously recover from ice slides, kicks, and even make its way back onto its feet from a fall. Now, the time has come where you can actually buy one.

Meet Spot, a dog-like robot who also happens to be a very good boy.

Spot is a quadruped robot built to handle a myriad of tasks, whether it be surveying a multi-floor building (yes, it can climb stairs), herding sheep through rough terrain (yes, it can get back up if it falls), or even help triage COVID-19 patients at your local hospital. And thanks to a seemingly limitless set of attachments, its use in the workplace can grow over time.

For just $74,500, you can have a spot of your own—so as long as you live in the United States and are purchasing for a commercial or industrial application that can benefit from the use of a four-legged robot.

Once you unbox your new 70.5-pound robodog and are ready to send it out on its very first mission (that's what Boston Dynamics calls Spot's treks around the environment), you simply pick up its Android-based controller and get to work using the on-screen menus and joysticks. If Spot's battery is fully charged, it can be piloted for up to 90 minutes at a time. Boston Dynamics includes two batteries with the purchase of the robot—each additional unit costs a whopping $4,620.

Each mission first requires the operator to record a path for Spot by picking up the controller and piloting it through an environment. Once Spot knows where it's going, it will use learned and placed fiducials to automate the walk again, utilizing built-in obstacle avoidance to navigate its recorded mission.

If Spot goes out of the operator's line-of-sight, it's possible to switch the controls to Teleoperation mode and move the robot around using its cameras as your own eyes. In the future Boston Dynamics plans to add complete remote functionality, meaning you could soon be able to pilot Spot across the globe.

While Spot can endure slopes up to 30 degrees, there are some situations where your new workhorse isn't designed to be operated. Boston Dynamics advises against operating the robot near glass, on slippery surfaces, in environments where Spot might become trapped, on moving platforms, and confined spaces. In fact, the company says that Spot's motors shouldn't be active unless it is at least two meters away from people.

Spot's usefulness can be expanded using a number of modules that Boston Dynamics calls "payloads." Right off the bat, a new robot owner can purchase a 360-degree camera, pan-tilt-zoom camera, LiDAR, and more advanced computing power modules. In the future, Boston Dynamics plans to launch a robotic arm payload for Spot as well.

If you're worried that this robot's introduction into the commercial market marks the start of a dystopian future, don't worry—Boston dynamics has very specific terms of service to prevent misuse. That means no weapon payloads, no intimidation tactics, and just generally following Asimov's first law: do no harm.

Personally, I'm excited for Spot. Sure, we might not see a yellow dog trotting our packages down the street and or delivering a pizza (yet), but it could potentially help us, humans, from repeating basic cumbersome and repetitive tasks, or even take the risk of harm out of navigating dangerous terrain. Only time will tell.