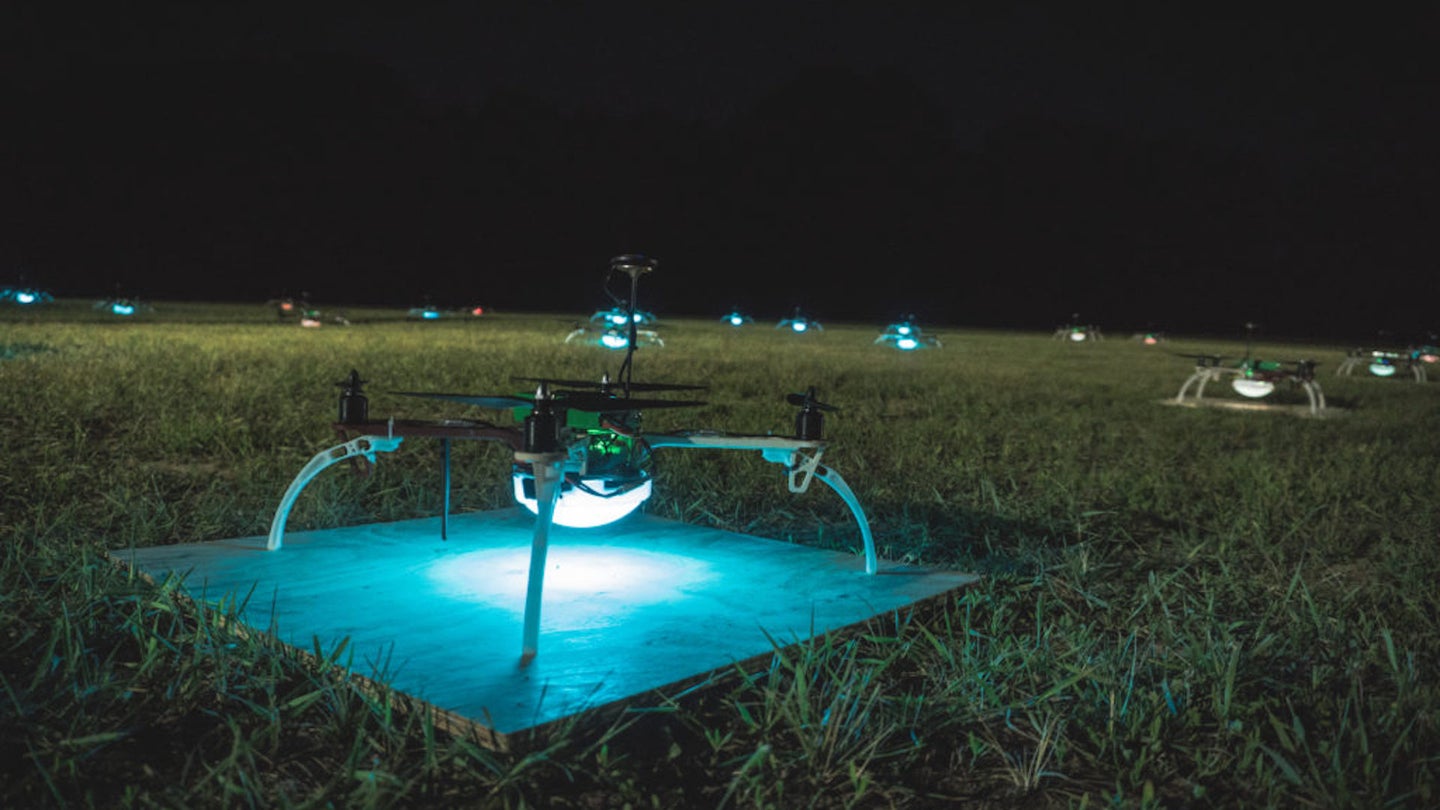 The Michigan-based Great Lakes Drone Company is one of an extremely small number of companies in the United States authorized by the FAA to perform drone-based light shows, with only Intel and Firefly seemingly serving as respectable competition. With four preset orchestrations that range from 25 to 100 synchronized unmanned aerial vehicles, the company performed a drone light show this week with one particular factor pushing into the history books, according to a USA Today affiliate.

On Thursday night, the week-long 2018 EAA AirVenture Oshkosh air show saw a swarm of 60 LED-fitted UAVs form hearts, eagles, and an American flag to the tune of Lee Greenwood’s “God Bless the U.S.A.” According to Great Lakes Drone Co. Director of Operations Matt Quinn, implementing a drone light show into an aviation air show was a historical first.

“We’re opening a lot of doors here that have never been opened before,” said Quinn. “Never in the history of North America, that any of us know about, have drones been let out of the cage and integrated with an air show performance.”

While we’ve seen plenty of aerial light shows dazzle audiences from California and China to the 2018 Winter Olympic Games, this aforementioned blend has apparently never been successfully attempted before. In order to pull this off, the Great Lakes Drone Co. reportedly partnered with AirVenture last December and focused on garnering FAA approval to combine forces before designing the aerial spectacle seen above Oshkosh last night.

“It’s very new for us and new for the air show community,” said AirVenture spokesperson Dick Knapinski. “There has never been an [FAA] waivered air show with a lighted drone air show in the midst of it.”

The theme of last night’s show, which will see a repeat performance the Oshkosh airport on Saturday, was specifically designed by AirVenture’s request to portray the history of flight and aviation. In terms of production, while each drone was preprogrammed to fly particular routes and display color combinations at certain beats, the show was processed entirely by one pilot and one laptop.

We’ve seen this tough task successfully pulled off before when Intel broke a Guinness World Record at CES 2018, but it’s still remarkable, nonetheless. For EAA Business Manager Nick Malouf, Thursday’s event strongly differentiated itself from previous shows and may have serious ramifications for this particular niche in the industry. “Once this show happens, it will blow up,” he said. “Obviously everyone has seen the Intel shows [at the Olympics and Super Bowl] but this show is breaking down a barrier. It’s been done in airspace but never in an air show. I think you’ll start to see them at smaller shows.”

Again, it’s only because the Great Lakes Drone Company garnered the limited FAA waiver that it was able to legally do so, as general regulations staunchly require one pilot to control one drone. The drones themselves were custom-built, weighing three pounds each and fitted with LEDs capable of lighting up to 7,000 lumens in brightness, which is essentially what your standard 1080p projector cranks out. For Quinn, drones are capable of telling a more nuanced narrative than their traditional fireworks counterpart, with each show tailored to a particular client’s story.

“Unlike fireworks, which are cool, sparkly things with different noise aspects you can time to music, drone light shows are really more about telling a story,” he said. “We work with clients about their vision and the story they want to do, creating the shapes and changing colors.”

If you’re in the area, Saturday night’s drone light show at 2018 EAA AirVenture Oshkosh might be worth attending, as it’s not only sure to be an impressive aerial display of our modern unmanned technologies but one that seems to have cleverly written itself into the pages of history.