The university's Agricultural and Biosystems Engineering department bought an $18,000 herbicide-spraying UAV. It covers 33 acres an hour. 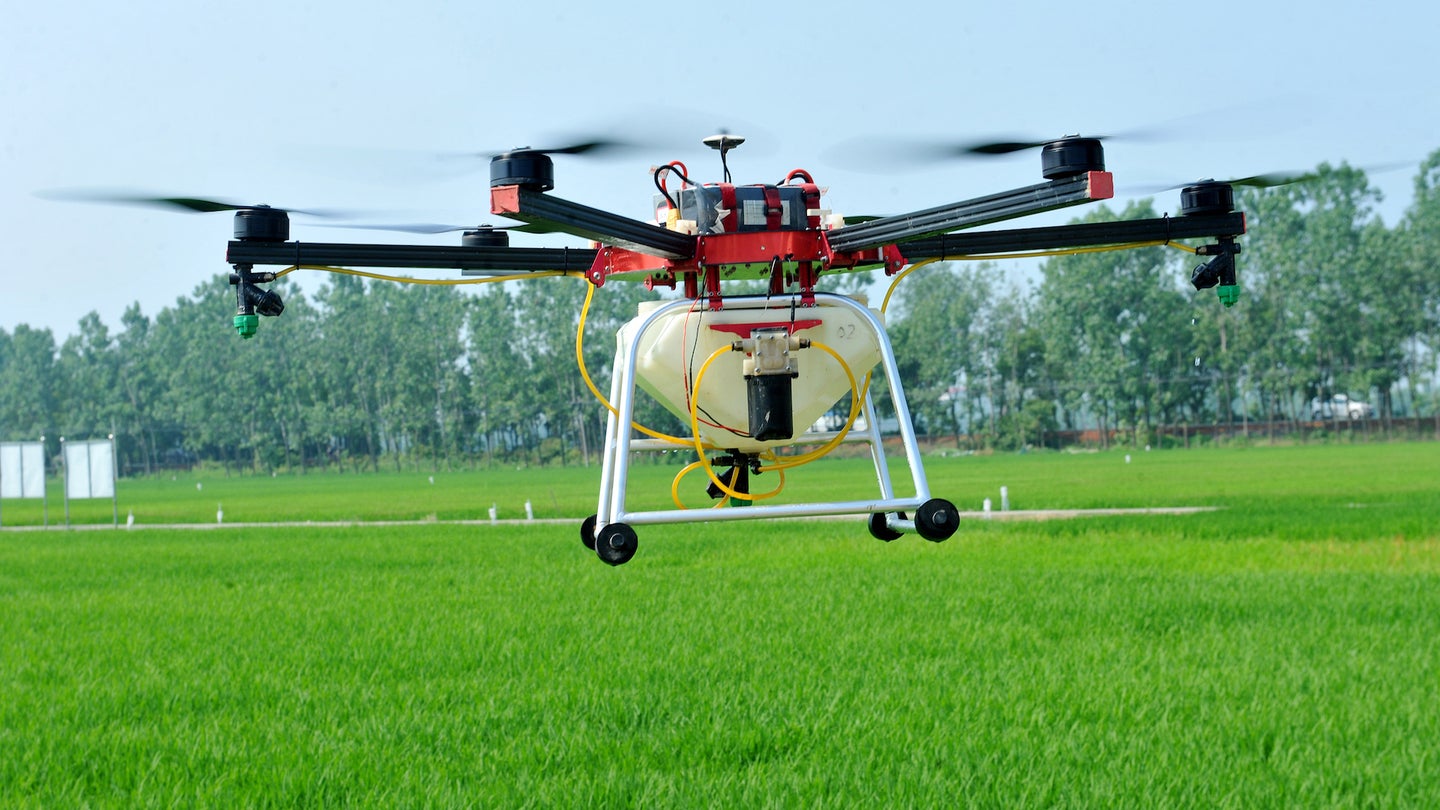 North Dakota State University’s (NDSU) Agricultural and Biosystems Engineering department has purchased an herbicide-spraying unmanned aerial vehicle that can carry over four gallons of liquid and autonomously disperse it for 30 minutes at a time, covering around 33 acres of crops in one hour.

According to the Brainerd Dispatch, NDSU engineers unveiled the six-foot-wide AG V6+ drone earlier this month, and acquired it to further develop the department’s “smart farm” project that’s rooted in using high-tech systems on one-quarter of land. A similar project focused on cattle is currently underway in Dickinson, called “smart ranch.” Upon completion of each proposed and tested method, economists will analyze the various systems and assess how efficient and financially viable they’d be in large-scale, real-world implementation.

Drones in agriculture have seen a pretty substantial increase in the past few years, as unmanned aerial technologies and autonomous software have become both more affordable and technologically sophisticated. Use cases for UAVs in this particular industry range from cattle and sheep herding to crop monitoring and planting.

NDSU, which has partnered with companies like Microsoft for this initiative, paid $18,000 for the agriculture drone, and has already trained one technician and two graduate students to properly utilize it. The drone, manufactured by Las Vegas-based Homeland Surveillance & Electronics, can be manually piloted via joystick or sent on autonomous spraying missions.

The plan is to deploy it in precise areas of land that require a certain amount of herbicide and are plagued by weed problems, without the need for a high-resolution imaging drone. John Nowatzki, NDSU engineer in charge of the “smart farm” project, said the only other UAVs capable of autonomous herbicide-dispersement currently in operation are at the U.S. Department of Agriculture’s Agricultural Research Service in Texas, and at the University of Nebraska.

According to Nowatzki, the NDSU plans to fill the herbicide tank with dye this August, to deploy the autonomous drone above water-sensitive papers and assess the system’s accuracy, coverage, and application rate. “It’s not something that’s going to compete with aerial applicators or ground-sprayers,” Nowatzki explained. “We see it as having an application for small weed patches and for rangelands to spray species like leafy spurge.”

As for the drone itself, the AG V6+ is a six-rotor, battery-powered drone with a carbon-fiber chassis. The spray boom can be modified to either disperse herbicide across a six-foot-wide area or spray more precisely for more targeted scenarios. “If you’re going to do specific locations, you’re going to have to press the trigger when it goes to those locations,” said Nowatzki, explaining that a manual component would be necessary for the latter.

In either case, the UAV would hover at an altitude of six feet or less, with no damage to the crops or soil beneath. Additionally, all of this would be accomplished within the line of sight, ridding the user of dealing with the Federal Aviation Administration’s beyond visual line-of-sight (BVLOS) regulations. “We are only flying it within line of sight,” Nowatzki said, adding that the drone and its autonomous guiding system would have “no difficulty going a mile and back.”

Ultimately, though this is a fairly expensive drone, successful testing and correlated reaffirmation of a system like this could result in increased, scaled-up implementation. We’ve been seeing farmers and ranchers gravitate to drones and their practical use-case-specific software for quite some time now, with this university’s purchase seeming like yet another indication of the technology’s continuous appeal.