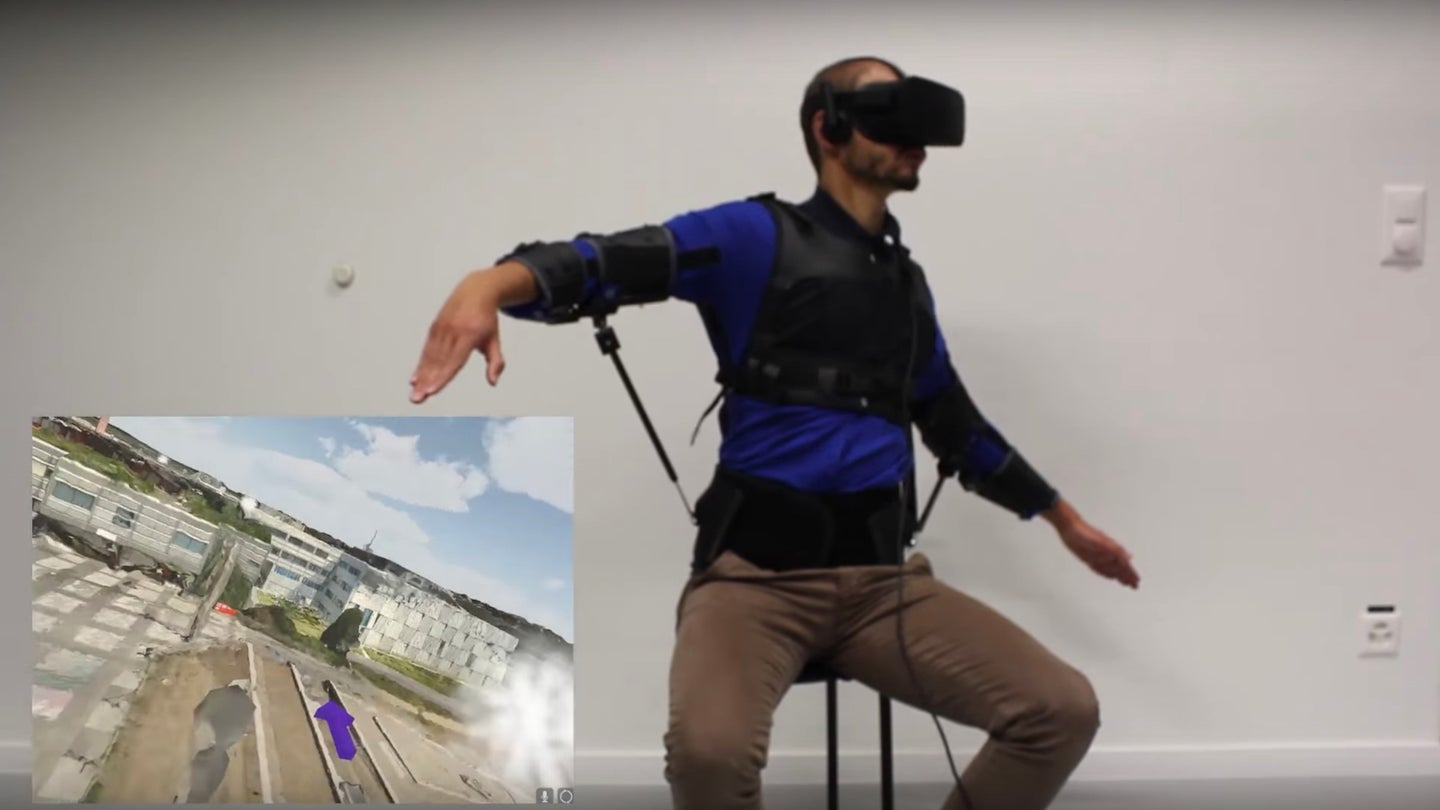 Researchers at the École Polytechnique Fédérale de Lausanne University in Switzerland have developed an exosuit that can essentially serve as a controller for unmanned aerial vehicles. While spreading your arms wide and turning your body to fly a drone might not seem like the most intuitive or immersive flight experience, adding a virtual reality headset component into the mix certainly makes this a more appealing and pretty convincing alternative to traditional piloting.

According to The Verge, the EPFL developed both the exosuit and the drone, and have aptly named the former the FlyJacket. The suit is a soft and easily applied vest that syncs its movement to the corresponding drone, while the VR headset transmits a live stream of the drone’s onboard camera. As the image of a person spreading their arms wide might resemble a bird or a plane, this system was designed for fixed-wing drones.

As for the technical functionality here, the suit is reportedly fitted with motion-tracking components to follow the user’s movements, with the upper arm straps serving as arm supports in order to stave off physical fatigue. After all, lifting your arms for more than a few minutes gets pretty tiring, which would get in the way of a thrilling, positive visceral experience.

The Institute of Electrical and Electronic Engineers (IEEE) which published a paper on the suit, claims the suit is able to detect and transmit torso pitch, which is the positioning and motion related to forward and backward movement and controls the drone’s pitch. It also notes the torso roll, meaning, the user bending to the sides, which essentially turns the drone in either direction. According to IEEE, this system as a whole is a more intuitive way to manage your drone’s flight than a conventional handheld controller. Let’s take a look, shall we?

“The design of the jacket was focused on keeping the material and technologies at a low price to have an affordable product,” said team member Carine Rognon. “In addition, it is small enough to fit into a backpack in order to be taken in the field and adaptable to many morphologies so many body types can use the same jacket.” Besides the benefit of the physical jacket being able to adapt to all shapes and sizes of varying body types, it’s the portability aspect that rings most important here. A lot of sophisticated wearable tech is often restricted to a specific setting or location, and it would seem to defeat the point if this vest and headset system fell into that category.

Moving forward, the team is eager to expand on the physical commands available, such as controlling the UAV’s speed while keeping the system “as natural as possible,” and adding haptic feedback to make the experience even more immersive. You want this system to correspond to input as much as you can, and giving the user corresponding physical signals seems like a logical way to go. Stay tuned, as we keep an eye on this project and report on any significant evolutions.