I was lucky enough to test out Parrot's new Bebop 2 Power FPV drone. Did I enjoy myself? Let's just say that this is exactly the kind of first-person aerial experience I've waited for since childhood. 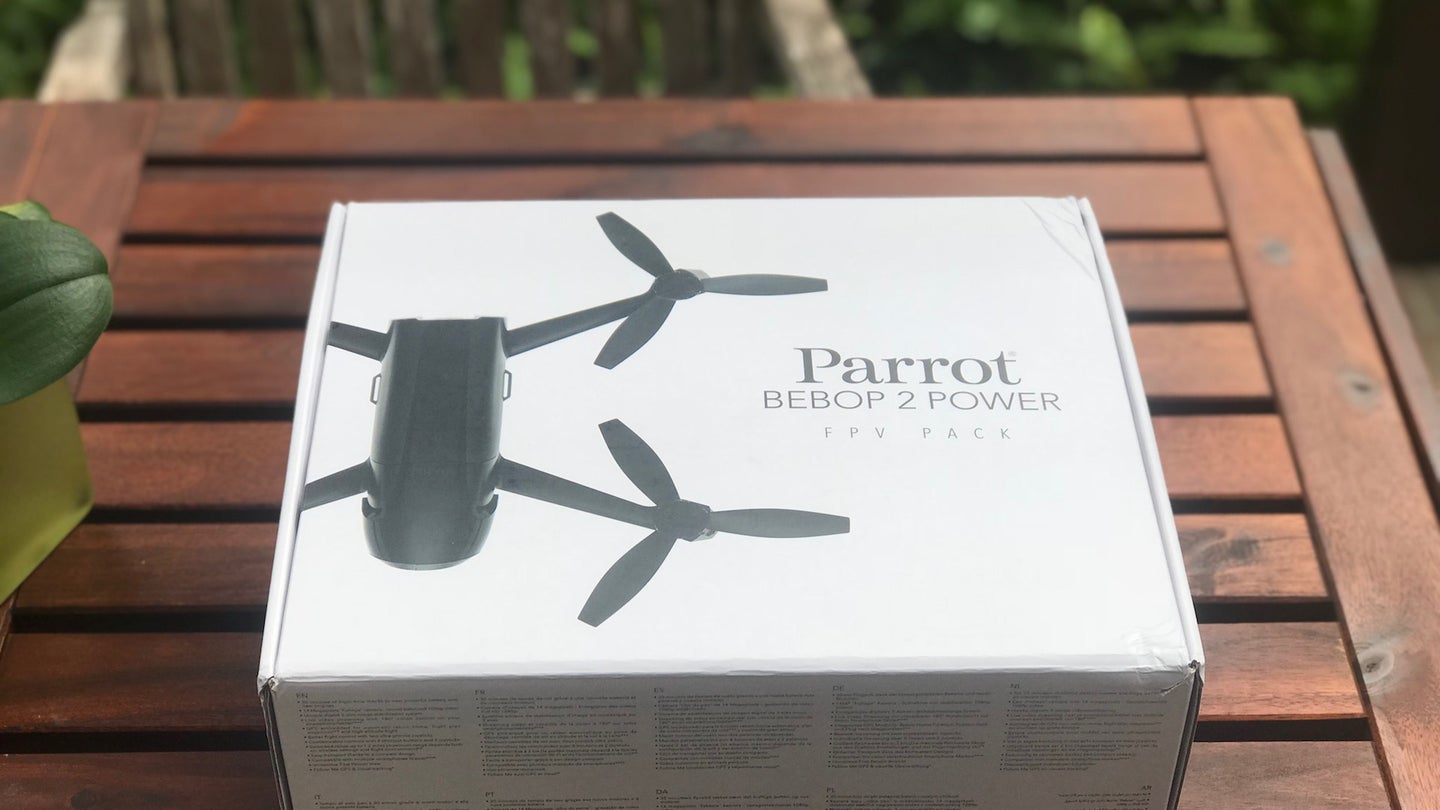 Science fiction informed me tremendously in my early years. I always dreamt of a future where smart machines autonomously whir through cityscapes and transportive first-person experiences were a casual norm of everyday life. Fortuitously, I now write for The Drive, where I’m regularly amazed at the technological strides our collective self is taking. Drones have become mainstream. They’re affordable, immense fun and are becoming increasingly appealing to younger and younger consumers. First-person experiences have become a huge part of gaming and simulator companies, and are evolving quickly year by year. I wrote about the first drone I ever owned a few months ago. The drone was Parrot’s Mambo, a fun entry-level unmanned aerial vehicle targeted at a fairly young audience unfamiliar with how to approach flying robots. It was perfect for me—at the time. As I’ve familiarized myself with more substantial, larger, capable drones, a hunger for more indelible experiences has grown in me. Thanks to Parrot, that urge was satiated with the new Bebop 2 Power, a drone that combines the satisfaction of sophisticated flight with the incredibly visceral catharsis of first-person piloting.

I was finally able to fly through the skies and look through the drone’s eyes - something I’ve dreamt of since the 20th century.

The drone itself is hefty, but in a good way. The weight and size of this thing feels right. You can easily grab it by its midsection and carry it around in one hand as it only weighs 1.15 lbs, but there’s an assurance to that weight that intuitively tells you this machine was built correctly. You notice the suspension is built in, when you press down on the drone as it rests atop a surface. It’s stable, and ready for action. But the whole premise of Parrot’s new Bebop 2 Power is that this is an all-encompassing first-person view experience. We’re not just here to fly a drone around like any other, we’re here for all the content included in your purchase, and that includes some pretty exciting stuff.

Included in the package is the following: the drone, the new Skycontroller 2, a smartphone/table stand that attaches to said controller, 4 additional propellers, the ‘Cockpitglasses 2’ (FPV goggles), 2 batteries (each providing for 30-minute flight time on a full charge), and the required chargers and cables. Here’s what that looks like:

Once you’ve downloaded the complementary ‘FreeFlight Pro’ app, screwed in four rotors with the accompanying wrench, and clicked in one of the two batteries - you are ready to take this thing into the heavens. Now, you have two choices here: either use the aforementioned app to maneuver the drone—which works decently, and allows you to access the app’s menu and consume a lot of interesting information such as a GPS-based map of your surroundings, height, speed, etc.—or you can plug your phone into the FPV Cockpitglasses 2, slide the former into the latter, and use the Skycontroller 2 as your controller. Here's a little look at what sort of info the FreeFlight Pro app can provide.

A finely-tuned first-person experience is the big appeal of the Bebop 2 Power—aside from the drone itself being a strong consumer UAV that’s fun to fly—I’d highly recommend going with Option Number 2 every single time. Did I mention that you can simply toss this drone into the air to have it take off? It's an incredible feeling, to have that kind of command over it. Once you've set that feature up with a few clicks, you'll never have to physically press 'take off' again. Just toss it up, and off it goes, whirring in the sky, awaiting your commands. It's brilliant.

Let’s get to serious business here, shall we? In as few words as possible, flying the Parrot Bebop 2 Power with the Cockpitglasses2 on your face and the Skycontroller 2 in your hands is a joyful, grin-inducing, visceral joy to behold. Now, I’m probably a bit biased here, as I’ve been waiting for an experience like this for as long as I can remember. But even those who’d never even imagined such a thing was possible—like my mother or my 4-year-old niece—had the same reaction I had.

Once you’ve linked the drone to your controller, and your phone to the drone, you’re set. Just slide that phone into the Cockpitglasses, make sure those straps are tight enough for the headset to stay on your head, and take off. Fortunately, the Skycontroller can be set up to your liking. Any of the triggers or buttons can be re-arranged to suit your needs. That means you can set a certain button to command a takeoff or a landing, so you won’t have to think about it while the glasses are on your head. You can even alter the sensitivity of the joysticks, and switch up which of them does vertical movements and which one is allotted the X-axis pivoting and turning. This kind of customization is greatly appreciated, even though I’ve already had my brother ruin my beloved presets. Thankfully, it’s an easy, quick fix.

An unexpected surprise came when my mother, who lives in Miami and whose property was ravaged by Hurricane Irma, put on the glasses as my brother piloted the drone around her yard. She immediately realized that this pristine image quality would allow her - thanks to the drone and the first-person enabling camera - to see how badly damaged the roof of her house was. In other words - the Parrot Bebop 2 Power became a tool as soon as she realized its potential.

Here's what it looked like, taking the Bebop 2 Power high above our eyeline, and inspecting the roof:

And here I am taking off from the balcony, before swooping around the yard:

As you can see, I'm still getting the hang of this thing and modifying my sensitivities and familiarizing myself with the UAVs tendencies...but I'm getting there!

Unfortunately, I have yet to experiment with the promising flight modes such as 'Follow Me' or any of the A.I.-assisted shots that this drone can capture. For example, once the Bebop 2 Power is hovering and you or a friend are in the shot, you can simply tap on the FreeFlight Pro app's feed of that and tell the drone which object to follow. It's as simple as double-tapping on yourself, and initiating a flight mode. With 'Follow Me' selected, it'll do just that. It'll follow you as you walk, run, bike, surf, whatever you're into.

There are a few other exciting features, such as the tracking and revolving shots, with which you can capture really cinematic takes. For example, the 'Tornado' shot will revolve around a person as it alters in altitude, maintaining the target in its center, and resulting in a perfectly stabilized, high-definition shot that could be used in your short-films, feature films, or just to impress your Instagram audience. Thankfully, getting that footage off the Micro SD card is as easy as plugging the drone into your computer and drag-dropping the files onto your local hard drive.

If you're nervous about losing your drone or flying it too far away from comfort, there are features for that too! You can easily locate the Bebop 2 Power with the aptly named 'Locate My Bebop' feature, which provides you with a map and GPS-rooted location of your UAV. Of course, you wouldn't ever need this feature if you just geofence the limits of the Bebop 2 Power's allowed flight area, which is yet another really cool asset to have. Just set up a radius of allowed flight, and the Bebop 2 Power will never disobey those limits.

Of course, you can always just tell the drone to 'Return Home', a command that is also automatically initiated upon loss of connection. That means, if everything goes wrong and you lose signal or your Skycontroller's batteries die, or your phone falls into the ocean, your Bebop 2 Power will automatically return home, no matter what. That's pretty damn cool.

Perhaps the most impressive, personally, is the fact that you can use the map on the FreeFlight Pro app and double-tap anywhere in range to command the drone to travel there. That means you can send the drone on a reconnaissance mission as you look through its eyes from the comforts of wherever you're sitting. That's intensely exciting, and something I can't wait to try out once I'm in an area less jungly, ravaged, and more open to aerial experimentation.

In the meantime, I've had to satisfy myself with flights through the yard while sitting on my couch, goggles on my head, controller in my hand, and a huge smile on my face. And to be perfectly honest, that's been a mindblowing enough experience to last me for weeks. Once I've tested the entirety of the Bebop 2 Power's capabilities, I'll make sure to report back.

If you're a fan of drones (and let's face it, as a reader of Aerial, you might be) and are curious about virtual reality or first-person experiences, I could not recommend the Parrot Bebop 2 Power highly enough.

The craftsmanship on the UAV itself is solid and impressive. It feels substantial and has the technical assets to back it up. The Skycontroller 2 fits right into the palms of your hand and could stand right alongside the controllers of certain video game companies. The fact that you can customize your button layout and joystick sensitivity alone is a huge bonus, here. In regards to the Cockpitglasses2, I'm the first to agree that a native display would've been a big step up. However, just because you have to use your smartphone and MacGuyver a first-person headset yourself, doesn't mean it isn't damn impressive. This may be my first FPV drone experience, but I'm more than satisfied by it.

As for the contents of the Parrot Bebop 2 Power FPV Pack, they've done an excellent job of putting together everything you'll need for a full experience. There are plenty of spare rotors, to boot. The only serious complaint I have is that the instruction manual simply isn't substantial enough. I was slightly confused as to which device to power up first—drone, FreeFlight app, Skycontroller—and how to link each device to the other. That took the sting out of my excitement, upon preparing the drone and being excited to fly it. Once I successfully got each device to recognize the other, that sting turned to joy and I was quick to forgive the frustration of that slight, early snag in the experience but it's something I'd improve upon.

All in all, it's been a tremendous joy. I've been recording footage, flying through my yard and the hallways of my mother's house while she yells at me to take it outside, and seeing through a drone's eyes for the first time in my life. I could not even imagine having such a thing as a child. It would've opened my imagination even more, converted me to a serious drone user early on and provided me with a vast amount of visceral joy. I highly recommend picking this up, provided you're into flight and the joy of simulating it for yourself.

The Parrot Bebop 2 Power FPV pack is now available at retailers or Parrot's website for $599.99.