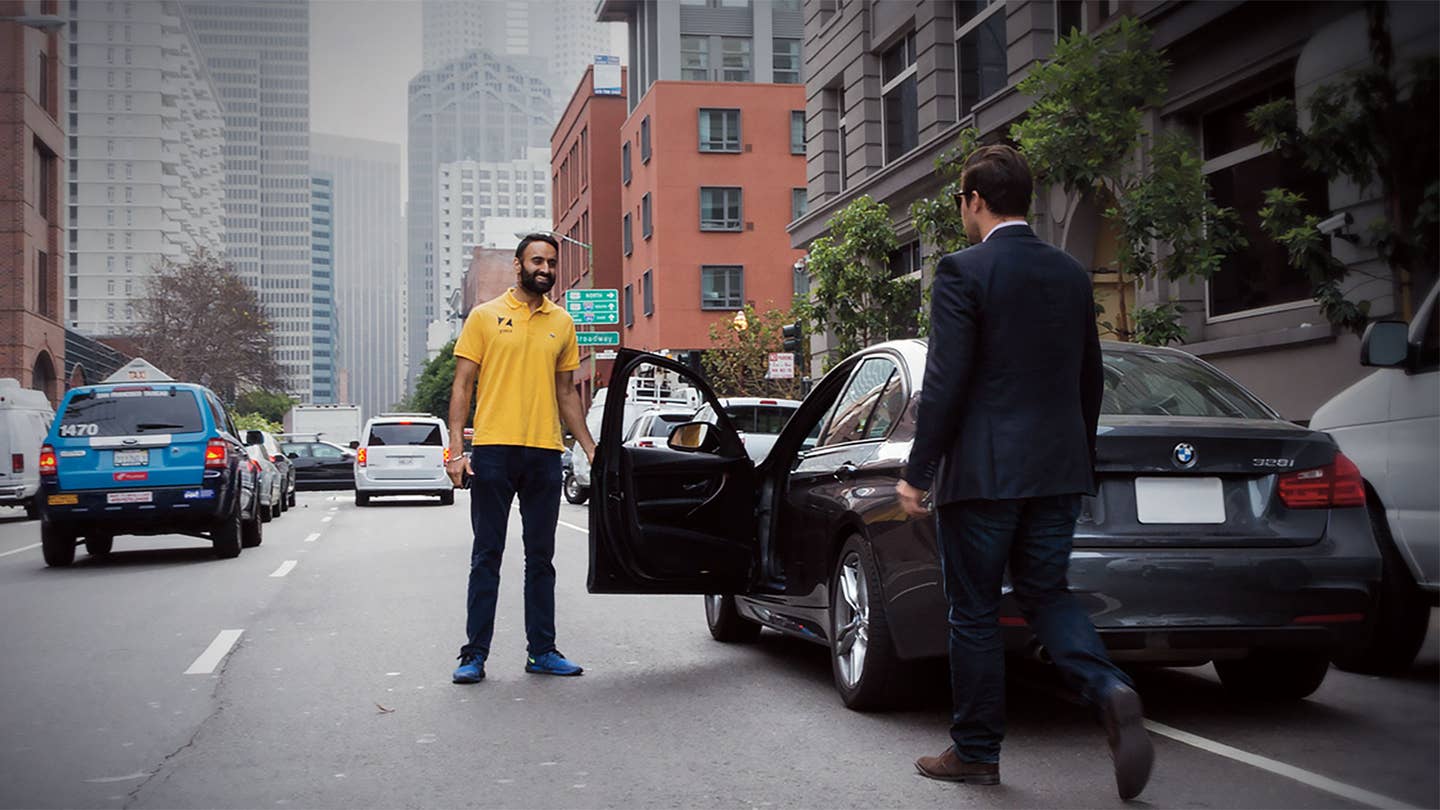 Parking in most major American cities is not only expensive and time-consuming, but also, in our fluid, technologically sophisticated times, retrograde. We Uber where cabs won’t or don’t take us. We PostMate dosas out of the designated delivery area. And we AirBnB houses in remote destinations where there aren’t hotels. But when we park in Midtown Manhattan in a lot near our brunch meeting, regardless of where our subsequent appointments, screenings, shoppings, viewings and enviable social lives may take us, we need to get back to Midtown at day’s end to retrieve the damn car.

A new app called Zirx intends to change all that. Using your phone’s geo-location services to track you, Zirx dispatches a yellow-costumed valet to nab your vehicle from wherever it is, park it in one of Zirx’s myriad contracted parking lots and then bring it back to whatever location you deem appropriate, whenever you need it. It’s like having a chauffeur, but just for parking.

“The first time you use it,” says Sean Behr, CEO of Zirx, “it feels like magic.” (App people always invoke magic.)

Zirx can also, at the tap of a button, take your car to be washed, have its oil changed, get its gas tank filled or—in a future profit center for the company—deliver it to your local dealer.

“We have lots of data around our customers,” Behr says. “What they’re driving, how far they’re driving, how old their car is, when their lease is up.” He’s already in contract with some automakers to nudge customers toward dealers’ sales and service centers, and is in conversations with many others. (Zirx isn’t interested in independent repair shops right now, which is territory claimed by Openbay.)

Users can buy a daily or monthly pass, and most of the 10,000 current users in Seattle, San Francisco, San Diego, Los Angeles, Washington and now parts of New York start off with a single use, before graduating to a regular subscription (in New York, $299-$499/month, depending on level of service). But despite a one-size-fits-all approach, consumer use patterns vary from city to city.

“In San Diego, it’s all for nightlife—baseball games, restaurant row,” Behr says. “In Seattle it’s mainly business commuters parking in the city for the day, then going home to the suburbs in the evening. And in New York, it’s mostly weekend trips out of town, people who keep their car parked in the city all week, but then want it brought out to get away on Friday afternoon.”

Interesting off-plan use clusters also develop. “We were seeing a bunch of weird blue dots [signifying pickups and drop-offs] at this one spot in San Francisco,” Behr says. “And when we looked into it, it was a big Marriott.” Guests were using the service to avoid the predatory hotel valet fees.

Behr sees the growth market for his app rooted in corporate contracts—businesses that pay for employee parking and see a temporal or cost savings in using the service. But he also expects individual use to increase as coverage expands. To test this theory’s potential, we gave Zirx a try on the mean streets of New York. In a Bentley, of course.

We often have trouble convincing the fancy indoor garage we use downtown to park ultraluxury vehicles like these in their cosseting, expensive building. (In a pinch, our wonderful friends at the Classic Car Club of Manhattan have helped us out with floor space amid their rad collection.)

But with just a few simple taps on the screen, we arranged for a valet to show up in front of our apartment building at the moment we would be arriving from our meeting uptown, and pick up this green menace. If we were working on the fly, and weren’t able to schedule until we arrive, we were told that Zirx valets usually appear within 15 minutes of a request, so long as we were inside their dedicated zone (Lower Manhattan, for now, and parts of Brooklyn).

Zirx sent us the valet’s name, image and contact info, as well as a secret four-digit security code to request from him so we wouldn’t just hand off our verdant $250,000 coupe to any friendly stranger in a windbreaker. The valet was courteous and professional, and did not roar off from in front of our building in first gear like the airport parking guys (and we) often do. He even sent detailed images of the car once it arrived at the garage, like a kidnapper delivering proof of life shots. It looked happy.

We used the app to schedule a return delivery for the following morning, a handy feature. (Zirx valets are available from 6:00 AM to midnight during the week, and until 2:00 AM on weekends.) The car was downstairs and warmed up when we walked out the door, shaving precious minutes off our trip to Connecticut by eliminating the three-block walk to our usual garage, as well as the tedium of waiting for the guys there to find, deliver and accept payment for the car—your credit card is attached to your profile, so there’s no money exchange necessary. You add a tip right in the app.

Our trial included a few more drop-offs and pick-ups around downtown, including one at a hotel that would otherwise have charged us a fortune to hold onto our vehicle, prompting equally ruinous effects on our alcohol intake at its rooftop bar. Zirx took our car; we stumbled home. The Bentley was back out front of our building the next morning for further adventures in the Nutmeg State.

Magic, in these situations, is usually an overstatement. But by removing our physical bonds to the garage, and all the correlative exhaustion and exhaust fumes, Zirx definitely has us under its spell. We expectantly await its entrance into our lexicon as a verb, and the ability to Zirx our car whenever and wherever we want.