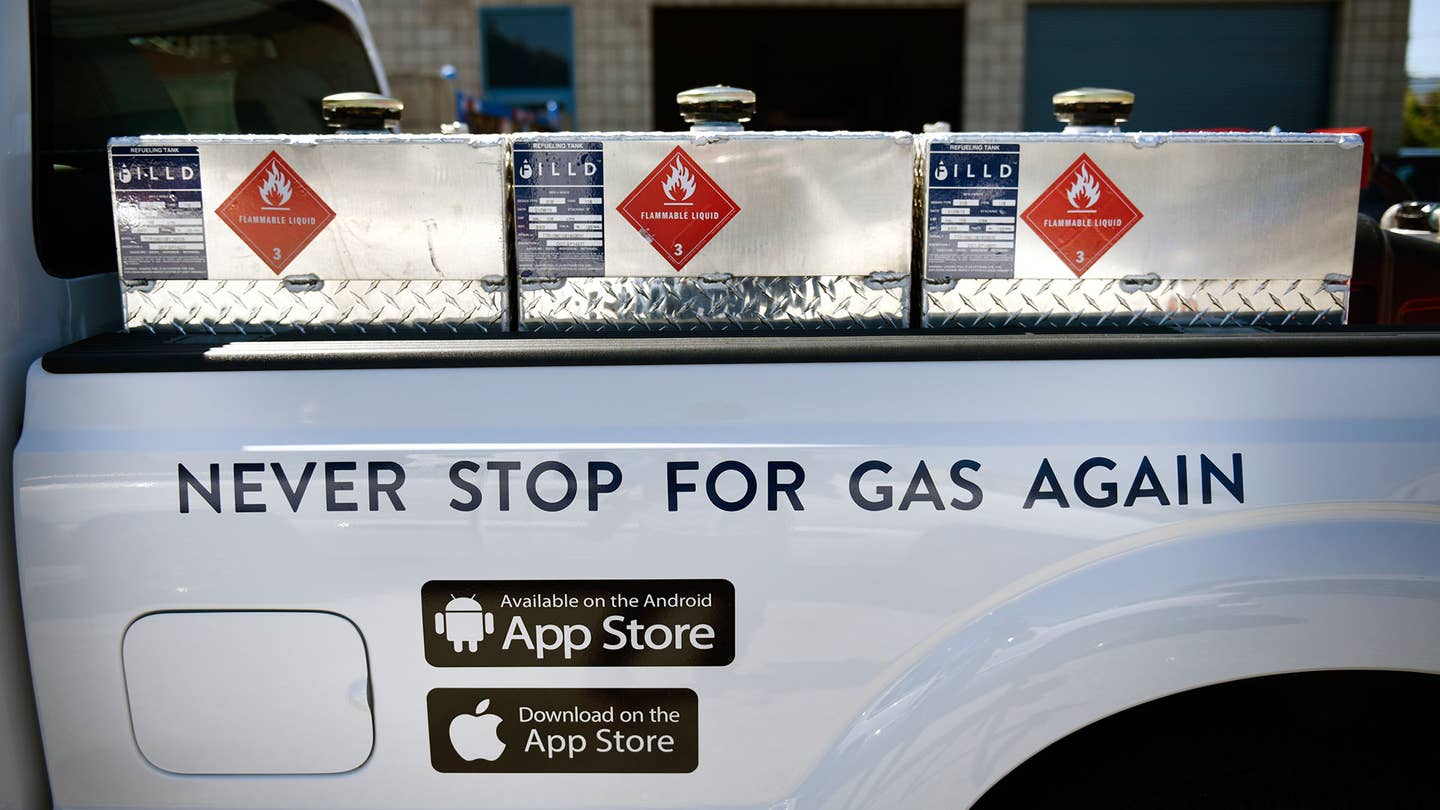 Once upon a time, a Lexus rep told us that some Lexus RX buyers paid close attention to the fuel economy of that extremely popular crossover. The customers didn’t care about saving money on gas, they cared about saving time. More miles per gallon meant fewer time-consuming trips to the gas station. A rogue faction of app-enabled gasoline delivery startups is obliterating such time concerns, all of startups prepared to drive to your car at an appointed hour and fill up your tank without you being there. They go by names like Booster Fuels, Filld, FuelMe, GasNinjas, Joule Refuel, Purple, WeFuel, and Yoshi. They operate everywhere from Los Angeles and Palo Alto to Seattle, Dallas-Fort Worth, Nashville, and Atlanta.

The core concept is similar throughout the group: open the requisite app, schedule an appointment, and a delivery driver shows up with regular or premium combustion juice. If your gas tank locks, you need to either leave it open for the delivery or be there to open it when the driver shows. The companies differ in their details, and a few of those details are peculiar. Some companies charge by the gallon based on the prices at stations near the parked car, some charge a service fee but sell the gas cheaper than at the station. Yoshi – named after a Super Mario Brothers character – will fill up cars in residential and business areas, using a specially designed Ford Ranger with a tank certified by the US Department of Transportation. WeFuel uses US DOT tanks and meters certified by the local Weights and Measures authority, and trains its drivers to hazmat certification. Booster Fuels only takes its 1,000-gallon trucks to office parks and businesses. Filld delivers to enclosed parking garages, apparently the only mini-tanker-based service to do this. Purple doesn’t use tiny tankers – its drivers are regular folks “with up to a half-dozen five-gallon gas canisters in the trunk,” like an undercover AAA operation. Purple said some of its drivers also double as Uber contractors, and will ferry paying customers around in between fill-up jobs.

We describe the cabal as a rogue because California authorities say mobile gas delivery is unsafe and illegal. A spokesman for the San Francisco Fire Department told Bloomberg, “It is not permitted.” A spokesman for the Los Angeles Fire Department said, “Our current fire code does not allow this process.” The Santa Clara Fire Department asked Booster Fuels to stop delivering, and Booster Fuels complied. The same fire department asked Filld to stop as well, but Filld ignored the request, telling the fire officials, “We strive to be safe in every way to the consumer, and this is exactly what we do, and we welcome dialog,” and telling Bloomberg, “If it was illegal, they would have and should have told us many months ago.”

California officials will discuss gas delivery at a meeting later this month, and the SF Fire Department has called on residents to inform it when they see mobile delivery trucks. It’s not Government vs. The Little Guy just yet, but the clearly the two parties need to have a talk soon. Until then, when the guy on the corner wearing the trench coat asks you if you wanna buy some gas, it’s probably ok to say “Yeah.”